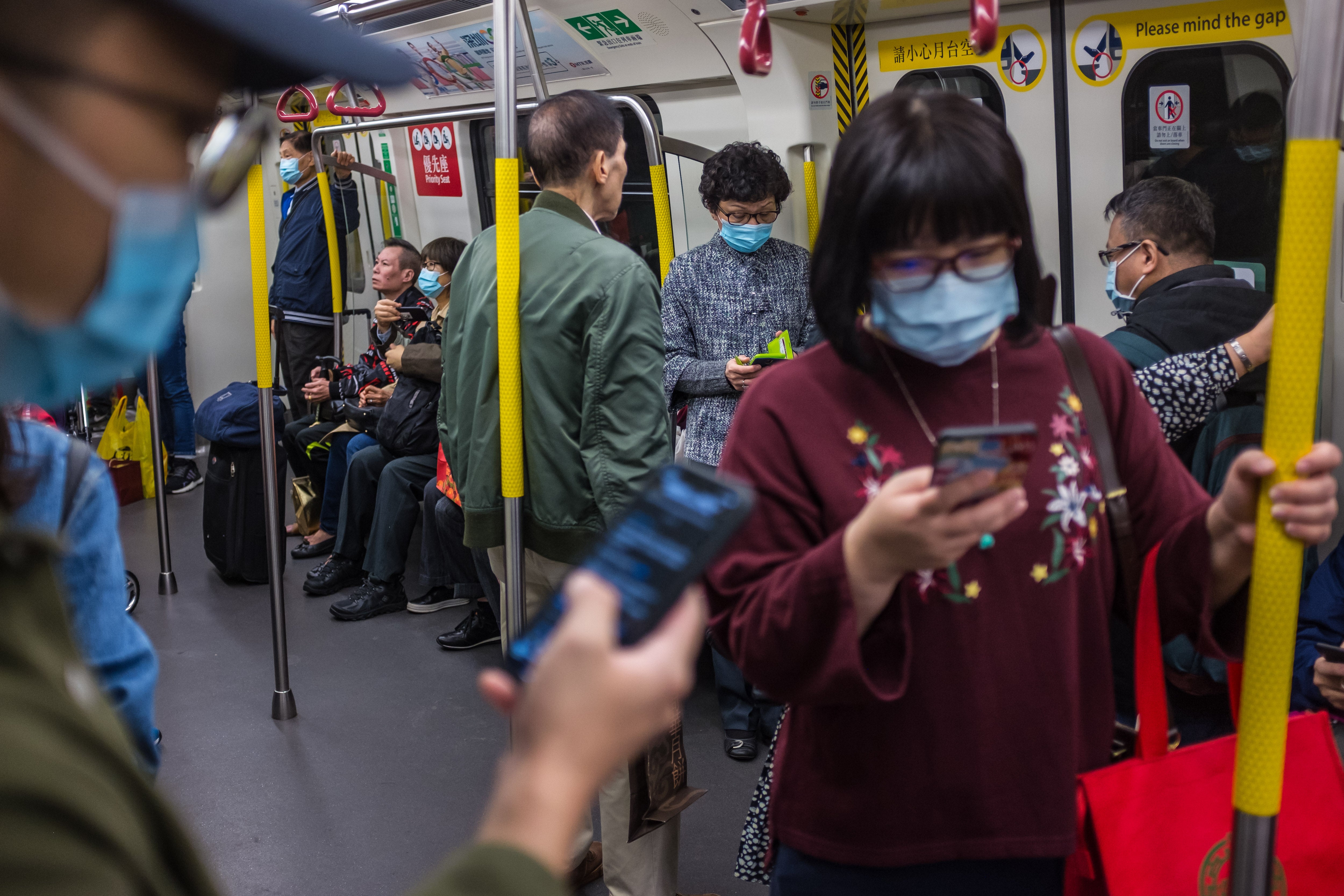 People wear masks on a train on the first day of the Lunar New Year of the Rat in Hong Kong on January 25, 2020, as a preventative measure following a coronavirus outbreak which began in the Chinese city of Wuhan. (Photo by DALE DE LA REY / AFP)

MANILA, Philippines — The influx of Chinese tourists to the Philippines and other Southeast Asian countries would take a hit from the outbreak of Wuhan coronavirus, but most economies in the region were expected to be ready in offsetting any potential economic impact of the illness, UK-based Oxford Economics said Sunday.

“The Wuhan coronavirus outbreak could potentially be a high-impact but short-lived event, similar to the SARS experience in 2003. As such, we think that the current virus outbreak poses a downside risk to our China growth forecast, particularly in the first quarter and possibly the second quarter should the outbreak be prolonged. But beyond that the impact should begin to fade,” Oxford Economics senior economist Tommy Wu and head of India and Southeast Asia economics Priyanka Kishore said in a Jan. 26 research briefing titled “Wuhan virus raises downside growth risks in short-term.”

Oxford Economics explained that while China’s gross domestic product (GDP) may be impacted especially on the consumption side (such as retail and tourism), and to a lesser extent on investments and industries, the economic effect would be “less severe compared to the SARS episode, at least for now.”

“The faster reaction time by the Chinese authorities this time around, with increased transparency and firm actions taken recently, are certainly helpful in mitigating the impact on public health, confidence and the economy. That is so even though municipal and provincial governments have at times been late, faulty and non-transparent in their response, especially at the early stage of the outbreak. We also expect the government to roll out measures, if needed, to stabilize growth,” Oxford Economics said.

Elsewhere in Asia, the economic impact of the Wuhan coronavirus would be felt by countries hosting many Chinese tourists as they get locked down in the mainland.

“We expect the economies that have a higher share of tourism in GDP and are more reliant on Chinese tourists—Hong Kong, Thailand, Vietnam, Singapore and the Philippines—to feel the impact more,” Oxford Economics said.

Citing Tourism Economics and World Travel and Tourism Council (WTTC) data, Oxford Economics noted that travel and tourism activities accounted for up to 25 percent of the Philippines’ GDP.

“Tourism and related industries, such as food and beverages, recreation, clothing, etc., are prominent drivers of growth for most Southeast Asian economies and Hong Kong. Moreover, Chinese tourists account for a higher share of total tourist arrivals in these economies compared to the SARS outbreak period,” Oxford Economics pointed out.

Asian economies were nonetheless seen to be able to withstand decline in foreign tourism receipts, especially from China. “All these economies have available policy space to buffer domestic demand, if needed,” Oxford Economics said.

As of Sunday, the Philippines remained free from infection of Wuhan coronavirus.

In a separate Jan. 24 report, London-based Capital Economics said that “if the outbreak continues to spread, one of the main channels through which the region will be affected is through a decline in tourist arrivals from China.”

In the case of the Philippines, spending by Chinese visitors in the country was still very low compared to most of its Asean neighbors, at less than 1 percent of GDP, estimates compiled by Capital Economics showed.

“During the SARS outbreak in 2003, Chinese tourist numbers fell by around one-third. If they fell by a similar amount again, it would knock around 1.5-2 percentage points from GDP in the most vulnerable countries. Overall though, lessons from past epidemics show that while the initial hit to the economy can be severe, growth tends to bounce back quickly after the virus is contained,” Capital Economics said.