For the love of chocolate, PH brands search‍ for golden ticket in the Netherlands 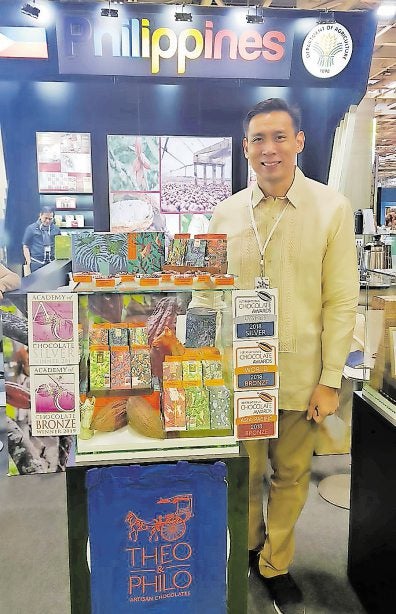 It’s difficult not to notice Theo & Philo at the chocolate section of the supermarket.

“There were definitely some people who didn’t get the concept of why it was different, especially since it’s priced a little higher than the imported chocolate,” the brand’s founder, Philo Chua, says in an interview with the Inquirer.

The quirky, albeit original flavors of the chocolate bars reflect Chua’s journey from being an information technology expert in his 20s to becoming a savvy baker in recent years.

Living alone in the United States meant he had to fend for himself. He learned to cook, at times baking for fun.

“There was a period of time when I was making cookies just for fun. I always try different recipes. Every week, I’ll just try out something,” Chua says, recalling his life abroad. “I just bring them to the office because I can’t finish all of them,” he says.

He says he would even volunteer to make cake for colleagues during their birthdays.

One day, he went to a chocolate shop in Pittsburgh in Pennsylvania. The shop showcased chocolates from all over the world, where he chanced for the first time single-origin chocolates.

He made his first bar using cacao beans he ordered online. He wanted to make sure he knew how to do one.

But at the back of his mind was the question: Why not use cacao from the Philippines?

Now 41, Chua has made a living out of mixing chocolates with the unlikeliest flavors, such as adobo and his personal favorite calamansi, as tribute to his home. He returned in 2007.

Theo & Philo, formed in 2010, is the first bean-to-bar brand in the Philippines. As the phrase bean-to-bar suggests, everything is made here, from cacao beans to the chocolate bars.

The company sources all of its cacao beans from Davao, buying directly from farmers. A taste of Theo & Philo is like nothing else, and yet it tastes so familiar, since it’s a combination of popular Filipino flavors.

“But I would say the majority of the people understand what we were trying to have. It’s about the Philippine cacao,” Chua says.

The company makes most of its money from sales to local consumers, even if its products are slightly pricey given its size (P115 each). Still, exports account for 10 percent of sales.

Americans, and not necessarily overseas Filipino workers, were their largest market outside the Philippines last year. Different countries like different flavors. France, he says for example, particularly liked the adobo-flavored bars.

Next month, Theo & Philo will be joining a local business delegation at a chocolate trade fair in the Netherlands, which also happens to be the world’s largest importer of cacao beans. Popularly called the Chocoa, the Cocoa Trade Show and Chocolate Festival is a five-day event, and a potentially important business opportunity for members of the industry worldwide.

“We are starting strong this year in our export drive on cacao and chocolate with the country’s first participation in Chocoa, known as the leading chocolate import event in Europe,” says Abdulgani Macatoman, Department of Trade and Industry (DTI) Undersecretary for Trade and Promotions Group.

“We expect that our specialty chocolates will be particularly popular since there is an increasing demand for high-quality chocolate from Dutch consumers and they are willing to shell out extra for better tasting and more sustainably sourced products,” Macatoman added.

Chua says he does not know yet what to expect from Chocoa, since it will be his first time to join.

But Netherlands, being a top importer of cacao beans, may as well be the point he was trying to make when he started his company years ago.

Some countries that have become popular for making chocolates are not known for growing their own raw ingredients, an irony which strikes as a wasted opportunity for countries like the Philippines.

Not all countries can grow their own cacao. You have to be in the cocoa belt, which is an area about 10 to 20 degrees north and south of the equator, the DTI said.

“Swiss [chocolate] brands, Belgian chocolate, American chocolate. Not one of these countries can produce a single cacao. They have to get it from countries like ours,” Chua says.

“[Other countries] just manufacture it there, but there’s no reason why we cannot make it here. We have the raw material here. So it sounds so silly,” he says. “Why are they better than us?”

He says Theo & Philo may be a small company now, but having a homegrown cacao may yet be the key to a sweet success.