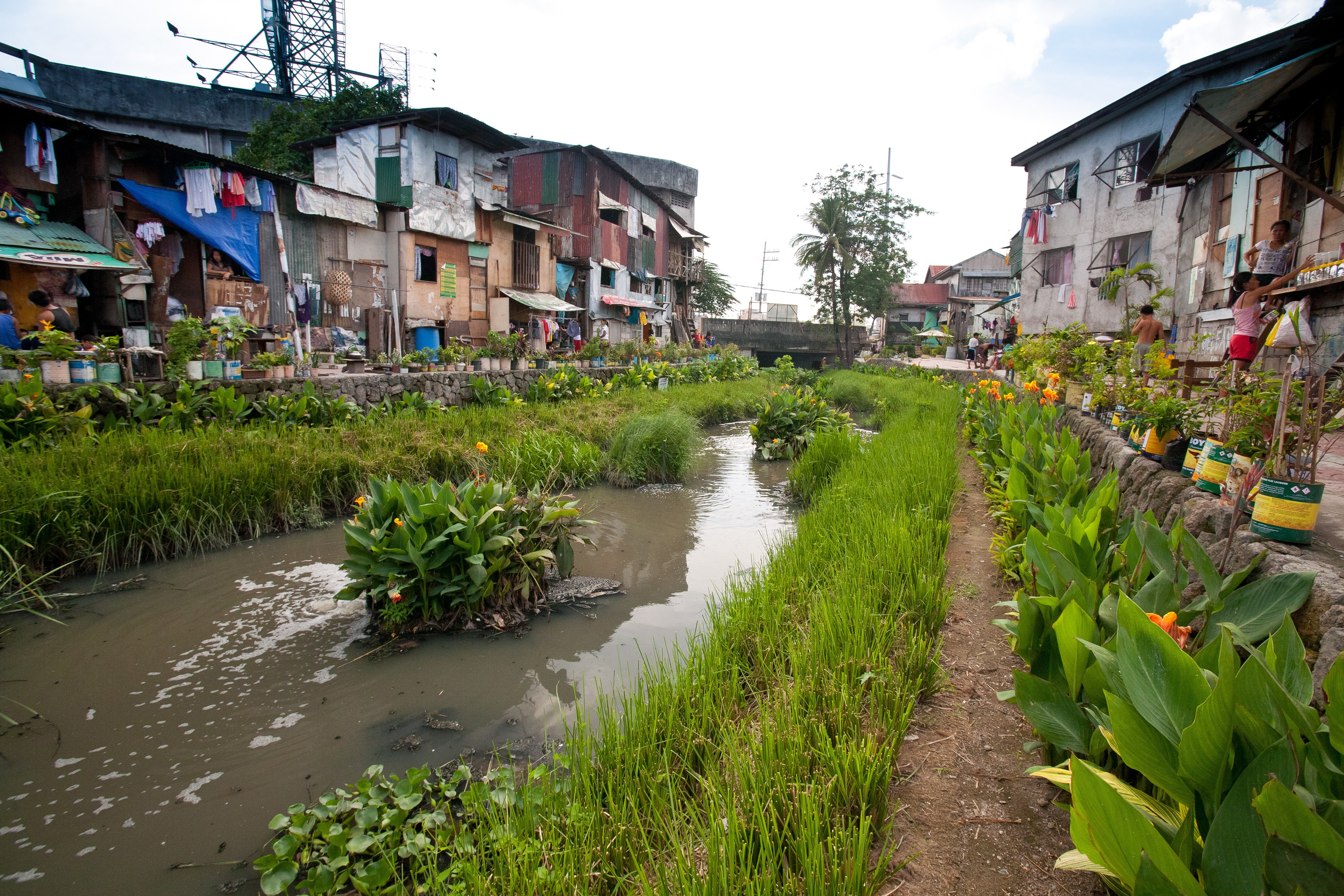 On a humid, cloudy afternoon in November, Angelita Imperio looked out from across her house at the nearby Estero de Santibañez, one of the tributaries that leads to Pasig River. She already finished some of her tasks for the day: beside the estero, the concrete walkway was clean, and the plant boxes have been watered. She fastened the rope of a makeshift rubber raft floating away downstream, detached from its mooring. The raft serves as the main transport of volunteers who clean the water and surrounding wetlands. “Maybe, the children volunteers forgot to tie it down yesterday,” she said.

Imperio is one of the few “River Warriors” stationed in Brgy. Cristobal, Paco, Manila—a group of volunteers tasked with protecting and cleaning up the city’s waterways. For more than 12 years, she has worked diligently trimming the wetlands, scooping floating garbage, maintaining the plant boxes, and picking out the overgrowth of water lilies that bloom in the area.

“I hope there’ll be more volunteers who will follow after me. I always tell the young volunteers, ‘You are the ones who will benefit from this work. This is for your future,'” Imperio said.

As a young girl, Imperio used to swim in the once-clean tributary. Then, after the fall of Martial Law came rapid urbanization, industrialization, and population in the city. She witnessed the gradual deterioration of the inlet, and what it eventually became: a murky, brackish, fetid backwater filled with water lilies, heaps of trash, and human waste.

“Informal settlers took residence along the estero, and because they don’t have a proper sewage system, many would defecate directly in the water. The stench was unbearable. Our children frequently got sick, the dogs were infected with galis, and flies were everywhere,” Imperio recounted.

Acting on reports from concerned citizens like Imperio, representatives from the now-defunct Pasig River Rehabilitation Commission (PRRC) came to inspect the estero, along with the late Gina Lopez, former secretary of the Department of Natural Resources (DENR).

After a few weeks, the rehabilitation of the 31-meter length Estero de Santibañez was underway. Informal settlers were relocated as river-dredging operations began, aimed at cleaning out the riverbed, which has become a reservoir of pesticides, hazardous human bioaccumulation, and heavy metals.

For its part, Maynilad Water Services, Inc. set up a sewage treatment plant (STP) along Estero de Santibañez, servicing almost 150 households, including Imperio’s. The company was also able to install interceptor pipes along the easement after it was cleared of all informal settlers, thus enabling it to catch wastewater generated by households in the area. Domestic wastewater no longer flows directly into the creek, but passes into a treatment plant, where the effluent is treated until it is safe to be released for marine life.

“We thank Maynilad for putting up its sewage treatment plant here,” Imperio said. “Without it, this place might still be filled with stench from the dirty sewage water.”

“After the rehabilitation, our children don’t get ill anymore, and there’s no more foul smell wafting from the creek. People have learned how to segregate their waste. We also work closely with our barangay officers, and all the proceeds from the collected recyclable materials return to the community,” Imperio said.

The story of Imperio and the revival of Estero de Santibañez is an exception to the rule, since most of the 43 minor tributaries leading to the Pasig River remain unrehabilitated to this day. It illustrates the difficult reality of cleaning the city’s waterways, an arduous task that requires intensive planning, consultations, assessments, and multi-sectoral participation.

As a concessionaire of Metropolitan Waterworks and Sewerage System (MWSS), Maynilad is committed to provide sewerage services to its customers. The company works closely with local government units, volunteer groups, and partner communities in its efforts to rehabilitate the entire urban sewerage system within its West Zone concession. Without such assistance, facilitating the expansion of sewerage coverage—and consequently establishing a similar success story as the one in Estero de Santibañez—would be an impossible task.

As of the first half of 2019, Maynilad’s sewerage coverage has already increased to 20% of its current 9.7 million customer base, ratcheting up from only 6% of the 523,930 water-served population in 2006. The company intends to build 30 more STPs until 2037, of which six are ongoing and in varied stages of progress. To date, it runs 22 STPs with a combined treatment capacity of about 664,000 cubic meters of wastewater per day.

Early in November 2019, Maynilad broke ground for what would become, upon completion, its biggest sewage treatment plant to date: the Php10.5 billion Caloocan-Malabon-Navotas (CAMANA) Water Reclamation Facility. To be erected on a 16-hectare lot in Caloocan, the CAMANA facility is designed to treat about 205 million liters per day of wastewater from about 1.2 million Maynilad customers in the three cities.

Bigger plans are up ahead. According to its approved business plan, Maynilad will invest almost Php200 billion until 2037 to attain full sewerage coverage in the West Zone.

Rising to the challenges

Still, many factors continue to hamper the implementation of said efforts.

Before Maynilad could install sewer lines along creeks and roads, local government units must first clear out and relocate informal settlers from easements and provide right-of-way access on privately owned lands, such as in subdivisions. This could take a considerable amount of time, from the negotiation phase to implementation, as well as the continued back-and-forth dialogues among all concerned parties.

Add to that, the actual timeline for the construction of an STP.

Ideally, an STP project should be well on track, barring any hurdles—the lack of land for wastewater facilities, permitting delays from local government units, and right-of-way conflicts.

Finding technically feasible lots for STPs and the pump/lift stations is a typical concern. STPs traditionally must be built on a single tract of land that has the lowest land elevation. In heavily congested areas, particularly Quezon City, it’s hard to find a suitable lot to construct STPs. Maynilad found a solution by decentralizing its wastewater treatment facilities there, building several small STPs which are spread out within a catchment area, instead of just one huge STP.

Then, once the sewer lines are installed, Maynilad needs the continued support of neighboring communities to maintain the cleanliness of nearby water bodies.

“Solid waste that accumulates at pumping stations adversely affects the efficiency of the pumping mechanisms, another reason why many pumping stations in Metro Manila are functioning below their rated capacity,” according to a report from the Philippine Journal of Science.

The report said most of the solid waste accumulating at pumping stations is residual (rather than recyclable), like Styrofoam, food and beverage carton packagings, and small single-use plastic sachets. Along with decomposing and settled solid wastes that accumulate in waterways, all these combine to reduce the holding capacity of pumping stations and the efficiency of STPs.

Hence, to ensure that its facilities work as designed, Maynilad is forced to work double-time to clear out solid wastes that clog its interceptor pipes. Otherwise, company investments on the infrastructure would be wasted, as the clogged pipes would not be able to convey wastewater to its treatment plant. But this is not a sustainable solution. Wastewater management is a shared responsibility. Thus, nearby communities must also do their part by not throwing garbage into bodies of water. 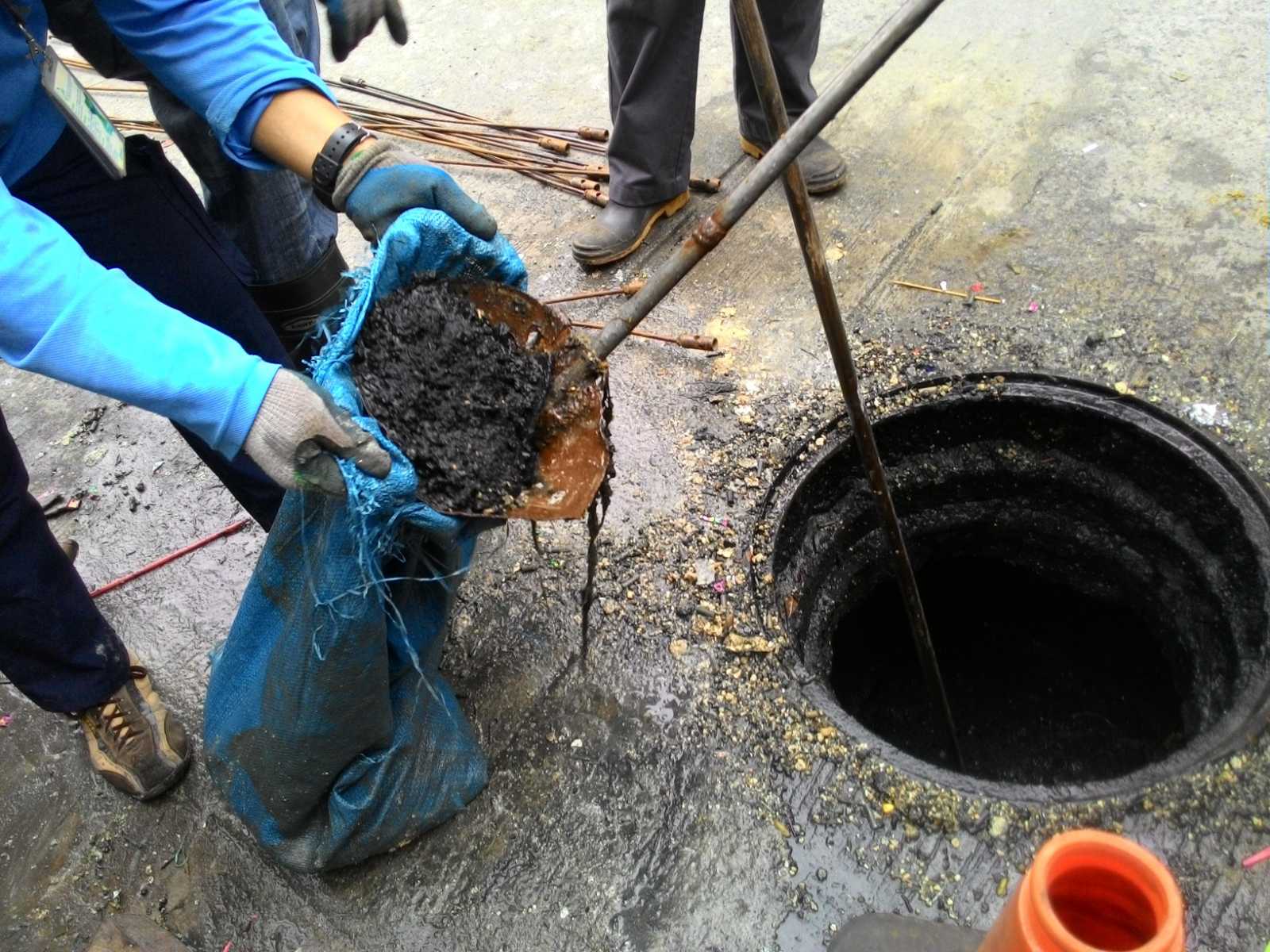 Back at the Estero de Santibañez, Imperio expressed her concern for the future. “When I was young, I used to dream of cleaning this river,” she said. “Even if PRRC was abolished this year, I will still maintain and clean this place.”

“It hurts thinking that I would have to leave the place like this. I’ve always been a nature lover. But honestly, it’s hard to do it alone,” she said.

Imperio said a new crop of young volunteers have stepped up to the task of maintaining Estero de Santibañez. She formed a group called Basura Kids, 157 children whom she has trained and taught on proper waste disposal. Another group is Estero Rangers, which was formed by the DENR. On them, Imperio places her hope.