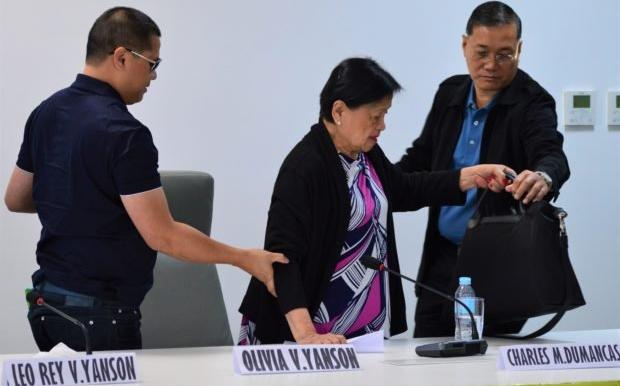 With the help of a security escort, Leo Rey Yanson (left) assists his mother Olivia out of the venue of the annual stockholders’ meeting of Bachelor Express Inc. in Barangay Bulua here on Sunday, Jan. 19, 2020. Yanson heads the Yanson Group of Bus Companies, the corporation that owns a number of subsidiaries, including Bachelor Express. (Photo by JIGGER J. JERUSALEM / Inquirer Mindanao)

CAGAYAN DE ORO CITY, Misamis Oriental, Philippines – As three members of the Yanson family held annual stockholders’ meetings for two of their bus company’s subsidiaries, other top officials who attempted to take over the corporation last year also gathered here over the weekend.

Bachelor Express is part of the Yanson Group that operates buses throughout the Philippines, including the cities of Bacolod, Iloilo, Dumaguete, Cebu, Cagayan de Oro, Butuan, Davao, Pagadian, Dipolog, Bohol and Batangas.

On Saturday, the Mindanao Star also reelected Yanson as its president and chair.

Yanson and his family were at the center of a controversy last year when four of his siblings staged a coup that almost toppled his leadership in the Yanson Group, creating a faction among the members of the family that own and operate the biggest fleet of buses in the Philippines.

The infighting resulted in a legal battle, although the court, ruling in favor of Yanson, reinstated him as the president of Yanson Group.

Yanson’s mother Olivia and his sister Ginnette Yanson-Dumancas sided with him against four of his siblings who formed an alliance.

As Yanson and top officials of the subsidiaries conducted their meetings, it was learned that his siblings also gathered in the city, but it was not immediately known what their purpose was and where they were staying.

A member of the Yanson Group’s legal counsel, who requested anonymity as he was not authorized to speak on the matter, also confirmed the presence of Yanson’s siblings here.

In a speech he gave on Saturday, Yanson hinted that some of his family members were also in Cagayan de Oro.

“We have our own [meetings]. We invited my siblings to be here, but I guess they have their own shareholders’ meeting as well,” he said.