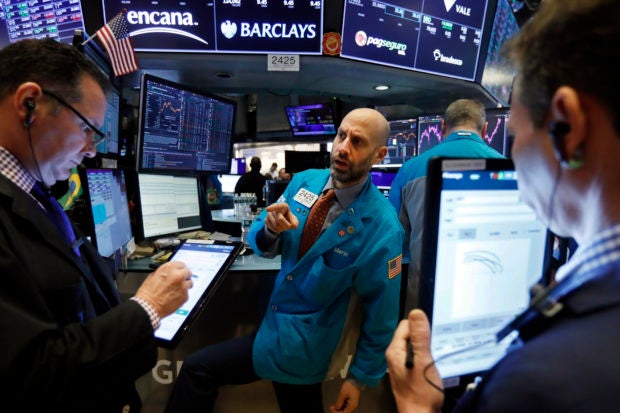 The S&P 500, Dow Jones Industrial Average and Nasdaq composite notched all-time highs, extending the market’s gains after a strong start to the year.

A batch of solid economic data injected more optimism into markets a day after the signing of an initial trade deal between the U.S. and China.

Consumers have been the backbone of economic growth and the government’s December report on retail sales showed that they continued spending at a healthy pace. Encouraging reports on manufacturing, weekly applications for unemployment aid and homebuilders’ confidence also helped lift the market. Investors also weighed a mixed bag of corporate earnings.

The good economic news follows the signing of the “Phase 1” trade deal between the U.S. and China that puts the nations on a clearer path to ending their 18-month long trade war. The pact eases some sanctions on China, which has agreed to step up its purchases of U.S. farm products and other goods.

Meanwhile, the Senate approved a new North American trade agreement Thursday that rewrites the rules of commerce with Canada and Mexico.

The trade deals and positive economic data have helped fuel optimism that corporate profits will be strong this year after coming in flat to down for most of 2019, and that’s keeping investors in a buying mood.

“Because we are continuing to see 2-2.5% GDP growth in the U.S., because both economic growth and earnings are expected to show gains in both the developed and emerging markets, that will likely lead to better earnings here in the U.S.,” said Sam Stovall, chief investment strategist at CFRA.

“Because of expectations that we are probably underestimating economic and earnings growth, as a result that 30,000-level will be seen,” he said.

Smaller-company stocks fared better than the rest of the market. The Russell 2000 index rose 22.82 points, or 1.4%, to 1,705.22.
The market’s record-setting rally has the benchmark S&P 500 on track to close out the week with its second straight weekly gain.

Technology companies were the clear leaders Thursday. Many of the companies stand to benefit from progress in trade relations because they are reliant on China for sales and supplies. Microsoft rose 1.8% and Cisco Systems gained 2.2%.

Energy, materials and utilities companies lagged the market in another sign that investors were confidently shifting more money into riskier holdings.

While only small slice of the S&P 500 companies have reported quarterly results so far, management teams have been giving a mostly improved earnings outlook, Stovall noted.

Wall Street expects S&P 500 companies’ corporate profits for the last three months of 2019 will be down by 1.7%. That would mark the first time companies in the benchmark index would post declining earnings four quarters in a row since the period ending in mid-2016, according to FactSet. Companies typically outperform forecasts and temper expectations for sharp declines by the time the bulk of financial reporting is done.

Traders are focusing mainly on companies’ outlooks for growth this year after posting flat-to-down earnings through the first three quarters of 2019.

Companies’ earnings growth was limited last year due to uncertainty over U.S. trade conflicts and jitters amid signs that the global economy was slowing. The bar for companies to exceed their prior year quarterly results also was unusually high, as the Trump administration’s sweeping corporate tax cuts helped power 2018 company earnings sharply higher.

“A lot of people are assuming that the 2020 (earnings) growth of 7.9% will be revised substantially higher,” Stovall said, noting that earnings growth expectations this year are higher for small caps stocks than they are for large caps. That’s one reason why smaller-company stocks outperformed the broader market Thursday.

Traders bid up shares in Signet Jewelers sharply higher after the diamond jewelry retailer significantly raised its fourth-quarter profit forecast. The company made the change because a strong holiday shopping season that will push a key sales measure to a big gain for the quarter. The stock vaulted 40.2%.