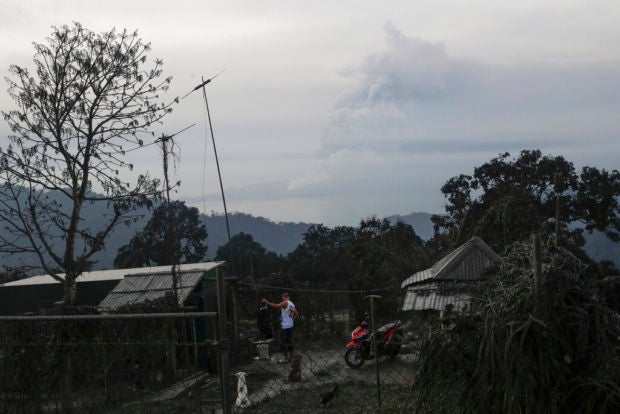 A man hangs clothes as Taal Volcano continues to spew ash on Monday Jan. 13, 2020, in Tagaytay, Cavite province, south of Manila, Philippines. The small volcano near the Philippine capital that draws tourists for its picturesque setting in a lake erupted with a massive plume of ash and steam Sunday, prompting the evacuation of tens of thousands of people and forcing Manila’s international airport to shut down. (AP Photo/Aaron Favila)

Ashfall from Taal knocked down power distribution circuits throughout Tagaytay City and parts of Batangas, Cavite and Laguna, where volcanic fragments also caused the outage of five major transmission facilities. Manila Electric Co. (Meralco) said in a statement that electricity in some portions of Sta. Rosa, Cabuyao and Calamba in Laguna province have already been restored as of Monday morning and that the company was working to restore power in other affected areas as soon as possible.

“Meralco assures the public of uninterrupted electricity in unaffected areas,” company spokesperson Joe Zaldarriaga said. “Meralco is currently on full alert and ready to respond to any power-related emergencies.”

According to the National Grid Corp. of the Philippines (NGCP), the ashfall caused the outage of three 500-kV lines and two 230-kV lines.

In an advisory, NGCP said in order to maintain grid stability, “an initial 72 megawatts” of load from Meralco was dropped—or the amount of supply cut off—and capacitor banks were put online.

“As soon as the situation is deemed safe, line crews will be mobilized to inspect the lines and conduct cleaning of critical line equipment,” the grid operator said.

Monitoring by the Department of Energy showed volcanic activity did not affect the operations of power plants, including the nearby 1,200-megawatt Ilijan gas-fired power plant, which remained fully operating.

However, both also advised their customers to take measures—such as covering containers of drinking water—to prevent ash contamination.

“We continue to monitor our raw water sources and we are ready to adjust the dosages of water treatment chemicals [accordingly], if needed,” Maynilad said.

“Some customers may experience weaker water pressure today due to heavier withdrawals from our pipelines,” Maynilad added. “We advise everyone to stock up only what they need, to avoid weakening water pressure.”

For its part, Manila Water said its subsidiary Laguna Water has deployed to “various sites in Southern Luzon” 30 water tankers to provide for the needs of evacuees affected by the Taal explosions.

Initial sites where the tankers are deployed include Poblacion Balele West Covered Court, Poblacion Gloria, and Tanauan City Gym in Tanauan City; PUP Gymnasium in Sto. Tomas; and Bolbok Provincial Sports Complex in Batangas City.“Other water tankers will be on stand by for deployment to other evacuation sites as requested by local government units,” Manila Water said. Its charity arm will also be sending 2,000 units of five-gallon bottles of potable water to various evacuation sites. INQ

Andanar to US: Don’t intervene in PH affairs when we didn’t meddle in Trump impeachment