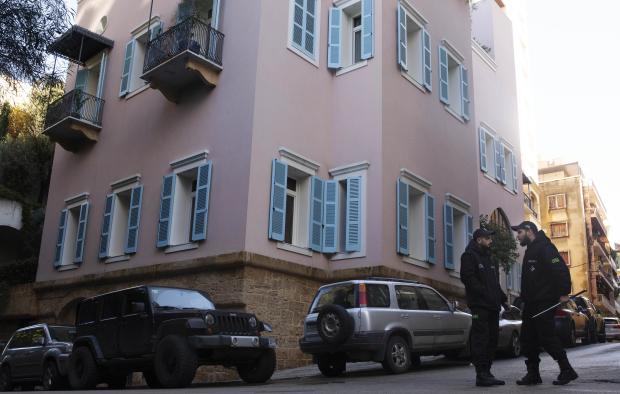 Private security guards stand outside of the house of ex-Nissan chief Carlos Ghosn in Beirut, Lebanon, Monday, Jan. 6, 2020. Japan’s justice minister vowed Monday to strengthen border departure checks and review bail conditions after Ghosn fled the country despite the stringent surveillance imposed as a condition of his release.(Photo by MAYA ALLERUZZO / AP)

TOKYO — Tokyo prosecutors obtained an arrest warrant Tuesday for former Nissan chairman Carlos Ghosn’s wife on suspicion of perjury, adding to the couple’s legal troubles in the country where he once was revered as a star executive.

The move against Carole Ghosn, who is not in Japan, followed her husband’s flight to Lebanon last week while he was out on bail awaiting trial for alleged financial misconduct.

Prosecutors said in a statement that Carole Ghosn gave false testimony to a Tokyo court last year in her husband’s case about the transfer of money from one company to another that allegedly caused losses to Nissan.

She also denied knowing various people or meeting with them, and the statements were false, they said. The allegations cited were unrelated to Ghosn’s escape.

Carole Ghosn was not immediately available for comment but earlier she told The Associated Press after her questioning in court that she considered the questions trite and unsubstantial.

She was banned from meeting with her husband after his release on bail because of fears she might help tamper with evidence.

Lebanon and Japan do not have an extradition treaty. Japanese justice officials acknowledge that it’s unclear whether the two can be brought back to Japan to face any of the charges. They said they were still looking into what could be done.

The Lebanese presidential palace said Tuesday that Lebanon’s president met with the Japanese ambassador and they discussed the case, but did not provide any other details. This is the first known meeting between the president and a Japanese diplomat since Ghosn arrived in the country on Dec. 30.

Japan’s chief government spokesman said Japanese officials have told Lebanon that Ghosn left the country illegally and that they are seeking cooperation in finding out what happened. Chief Cabinet Secretary Yoshihide Suga said the situation must be handled carefully.

Prosecutors have said they did not want Carlos Ghosn to be granted bail because they saw him as a flight risk.

“With his abundant financial power and multiple foreign bases worldwide, it would be easy for the defendant Ghosn to flee from Japan,” they said in a statement.

Earlier Tuesday, Ghosn’s former employer, Nissan Motor Co., said it was still pursuing legal action against him despite his escape.

The Japanese automaker said in a statement that Ghosn engaged in serious misconduct while leading the Nissan-Renault-Mitsubishi alliance.

“The company will continue to take appropriate legal action to hold Ghosn accountable for the harm that his misconduct has caused to Nissan,” it said, without giving details.

Ghosn managed to skip bail and leave the country despite surveillance while he was staying at a home in Tokyo.

Japanese news reports Tuesday gave new details of that escape, saying he left his residence alone, met two men at a Tokyo hotel, and then took a bullet train to Osaka before boarding a private jet hidden inside a case for musical equipment.

Japanese Justice Minister Masako Mori told reporters that measures were being taken to make sure all cargo and luggage are inspected at regional airports, including those for private jets, to prevent a recurrence.

Nissan’s statement was the first word from the company since Ghosn’s flight last week. The automaker and Japanese prosecutors allege Ghosn misstated his future compensation and diverted company assets for personal gain. He says he is innocent.

Ghosn has not appeared in public since arriving in Lebanon. He is expected to give his side of the story in a news conference planned for Wednesday in Beirut.

Earlier, he said the allegations against him were concocted by Nissan, Japanese authorities and others who wanted to block efforts toward a fuller merger between Nissan and its French alliance partner Renault SA.

Ghosn said in a statement last week that he wanted to escape “injustice.” Critics of the Japanese judicial system say his case exemplifies its tendency to move too slowly and keep suspects in detention for too long.

Nissan said in its statement that an investigation is ongoing in France, and the U.S. Securities and Exchange Commission has found some wrongdoing.

Ghosn has not been charged in France or the U.S.

Mori and other Japanese officials have defended the nation’s judicial system and denounced Ghosn’s escape as an “unjustifiable” crime. Mori said each nation’s system has its own way of making arrests and granting bail.

The scandal over Ghosn’s case has tarnished Nissan’s image and created a leadership vacuum at a time when the automaker’s profits and sales are tumbling. Ghosn’s successor Hiroto Saikawa also resigned last year amid financial misconduct allegations related to questionable income.

“Nissan will continue to do the right thing by cooperating with judicial and regulatory authorities wherever necessary,” the Yokohama-based company said.

Although Ghosn is unlikely to face trial in Japan, Greg Kelly, another Nissan former executive, is still facing charges of under-reporting Ghosn’s future compensation. He says he is innocent.

Kelly, an American, who is out on bail, has not been charged with the breach of trust allegations Ghosn is also facing.

Nissan has also been charged as a corporate entity. The company says it won’t fight the charges and will pay the required fines.