Ex-Nissan chief made escape to Beirut aboard charter flights 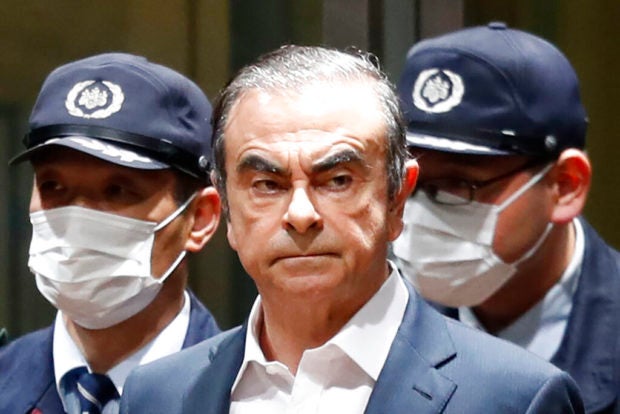 ANKARA, Turkey — Charter flights that spirited ex-Nissan chief Carlos Ghosn from Japan to Istanbul and from there to Beirut — an escape made possible with the help of an airline employee who falsified records. Security camera footage reportedly showing he simply walked out of his Tokyo home hours before fleeing the country.

Details emerged Friday of the bizarre path to freedom that allowed the ex-Nissan boss to jump $14 million bail, seemingly under the noses of Japanese authorities, and evade charges of financial misconduct that could carry a jail sentence of up to 15 years.

The improbable weekend escape has confounded and embarrassed Japanese authorities, even setting off wild speculation that Ghosn was carted off inside a musical instrument case from his home, which was under 24-hour surveillance.

But on Friday, Japanese public broadcaster NHK TV cited investigative sources as saying security footage showed he simply walked out of the house alone around noon on Sunday. Details also emerged about the route the fallen auto industry executive took to Lebanon, where he grew up and is considered something of a national hero.

Turkish airline company MNG Jet said that two of its planes were used illegally in Ghosn’s escape, first flying him from Osaka, Japan, to Istanbul, and then on to Beirut, where he arrived Monday and has not been seen since.

It said a company employee had admitted to falsifying flight records so that Ghosn’s name did not appear on them, adding that he acted “in his individual capacity” without MNG Jet’s knowledge.

The company said it launched an investigation after learning from media reports that the planes were for Ghosn and not the officially declared passengers.

“The two leases were seemingly not connected to each other. The name of Mr. Ghosn did not appear in the official documentation of any of the flights,” the company said in a statement. It did not say who the jets were leased to or identify the employee it said aided Ghosn’s escape.

Lebanese authorities have said Ghosn entered the country legally on a French passport, though he had been required to surrender all three of his passports to his lawyers under terms of his bail. He also has Brazilian and Lebanese citizenship.

Interpol issued a wanted notice on Thursday for Ghosn, but Japan has no extradition treaty with Lebanon and it appeared unlikely he would be handed over.

The plane carrying Ghosn landed at Istanbul’s Ataturk Airport, which is closed to commercial flights and used only for cargo and private flights, the Interior Ministry said. “A transfer occurred in the cargo section,” of the airport, spokesman Ismail Catakli said. “In this way, Turkey was used as a transit point.”

A cargo company employee was aboard the flight to Beirut and immediately returned to Istanbul aboard the same jet, Turkey’s Hurriyet newspaper said. The employee was one of seven people detained by Turkish authorities investigating how Ghosn passed through Turkey. Two were released Friday while the five others were ordered arrested, the state-run Anadolu news agency said.

Lebanese Justice Minister Albert Serhan told The Associated Press in an interview that Lebanon “will carry out its duties,” suggesting for the first time that the automotive titan may be brought in for questioning. But he added that Ghosn entered the country on a legal passport and appeared to cast doubt on the possibility Lebanon would hand Ghosn over to Japan.

On Thursday, Ghosn issued a statement — his second this week — seeking to distance his Lebanese wife and family from any role in his escape.

Ghosn was set to go on trial in Japan in April. In a statement Tuesday, he said he fled to avoid “political persecution” by a “rigged Japanese justice system.” He has promised to speak with reporters next week.

His lawyer in France, Francois Zimeray, told NHK that he was in frequent contact with Ghosn since he arrived in Lebanon, and Ghosn appeared to be filled with “a fighting spirit.” Ghosn was eager to start clearing his name at the news conference next week, Zimeray said.

Ghosn, who grew up in Beirut and frequently visited, has close ties to senior politicians and business stakes in a number of companies in Lebanon. People take special pride in the auto industry executive, who is credited with leading a spectacular turnaround at Nissan beginning in the late 1990s and rescuing the automaker from near bankruptcy.

Ghosn, who is charged in Japan with under-reporting his future compensation and breach of trust, has repeatedly asserted his innocence, saying authorities trumped up charges to prevent a possible fuller merger between Nissan Motor Co. and Renault.