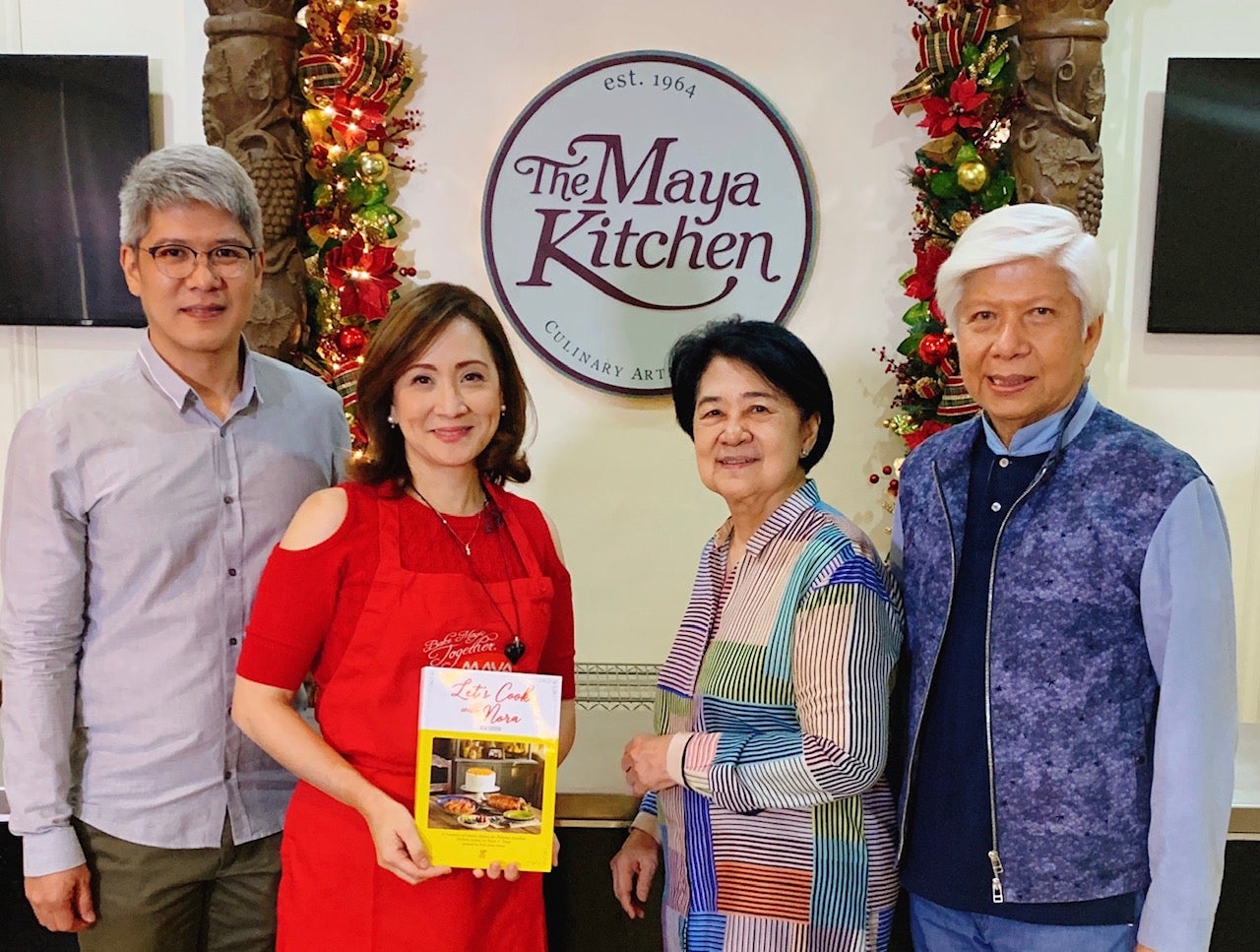 You might have heard by now that this year, Nina updated her mom’s iconic book Let’s Cook With Nora. This was for the 50th anniversary of the 1969 publication of the cookbook that helped and inspired generation after generation of home cooks.

When I posted on Facebook about the updated version of the book, uncles and aunts and friends from abroad were quick to take photos of their own disheveled, torn and stained copies of the original publication, proving that it was a book that was really put to good use.

“My family ate well during the growing up years of our children because of that book! We still use it even if the pages are dog-eared and stained with antique sauces! I hope to get this newest version,” said Mario Alcansia Sr. of Mindoro Oriental.

Megan Herrera, a 78-year old jazz singer from Australia who moved to the Philippines recalled, “When we arrived in the Philippines in 1974, (my husband) Roger bought me Nora Daza’s book. It was wonderful and it was my bible for cooking. He even bought one for my mom so she could cook the recipes in Australia. I still refer to it sometimes.”

Today we speak so much about culinary tourism but Nora Daza was already promoting Philippine cuisine—and successfully at that—even in the 1960s.

In 1972, she opened a Filipino restaurant in Paris: Aux Iles Philippines (The Philippine Islands). It was well-received, with good reviews from Le Monde and the International Herald Tribune. It was hailed by the Prix Marco Polo as one of the top three Asian restaurants in Paris.

It earned a place in the Michelin guide, receiving a rating of three forks. It was also honored by the prestigious Gault-Millau Le Guide de Paris as one of several outstanding restaurants in Paris.

A big suki (repeat customer) of the restaurant was famous French actress Brigitte Bardot, who loved Filipino fresh lumpia. Other hits of the restaurant were kuhol, the Filipinos’ response to the French escargot, and sinigang na sugpo (sour soup with prawns).

Like Aux Iles Philippines in Paris, this restaurant was likewise well-received by critics in the US and was awarded four crowns by Pan America.

While managing these restaurants abroad, she was also running her first “baby,” Au Bon Vivant, the first French restaurant in Manila, which opened in 1965. She was first to introduce the Philippine gourmet market items like Chateaubriand with Bearnaise sauce, Duck a l’Orange, Pastel de Lengua, Crepes Suzette and the like.

Note, too, that she also brought to the Philippines the best French chefs. So way before these four-hand dinners with foreign chefs became trendy for millennial foodies, Nora Daza was already doing this in the ‘60s.

And the chefs she brought in were the best in the world, most notably Paul Bocuse, father of nouvelle cuisine, and Gaston LeNotre, a legendary French pastry chef.

In the 1980s, she had a cooking show, Cooking It Up with Nora as well as a radio program, At Home with Nora. She also became head of the The Great Maya Cookfest, which launched the culinary careers of some stellar names, among them chef Jessie Sincioco, who responded to an ad and won the cookfest.

In cooperation with the Liberty Commodities Corp., which was also behind The Great Maya Cookfest, Nora and The Maya Kitchen organized culinary exchange tours to promote Philippine cuisine abroad and to expose aspiring and budding chefs to foreign cooking techniques.

With this bond between Nora Daza and Maya, it was but fitting that Nina Daza Puyat hold one of the launches for the updated Let’s Cook with Nora at The Maya Kitchen, which to this day continues to encourage and support home cooks and is still at the forefront of promoting Philippine cuisine through events and other programs.

I caught Nina holding back tears as she remembered her mom in the middle of the launch.

Nora would be proud of Nina’s work, for sure, and is undoubtedly beaming from above, seeing that her legacy continues on with this culinary bible now updated for a new generation.

Nina, in her foreword, with her siblings Bong (+), Sandy, Mariles and Stella, also dedicated this book to all home cooks, culinary students, chefs and food business owners whose lives were somehow touched by Nora Daza.

But now it’s the turn of a new generation of cooks—whether professional or aspirational—to put dog ears on this book’s leaves and stain it and stress out the pages until they are worn out. That would only mean that the recipes in those pages, each one personally tested by Nina and team, have once again come alive for a new generation, new families, new chefs, new home cooks, all cooking with love from this labor of love.

This is the gift that keeps on giving. So if you don’t have a copy yet, go buy the book, and let’s cook with Nora … and Nina!

Let’s Cook with Nora is available at National Bookstore and online via Lazada and Shopee.