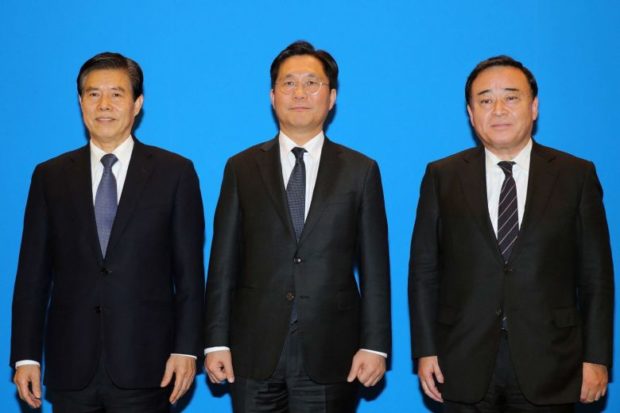 BEIJING — China, Japan and the South Korea will actively push for signing of the Regional Comprehensive Economic Partnership agreement in 2020 and accelerate the negotiating pace of the China-Japan-ROK free trade agreement, their top economic and trade officials said in Beijing on Sunday at their 12th Economic and Trade Minister’s meeting.

The officials also advocated an open, inclusive world economy and said they would work together to oppose protectionism and unilateralism, to maintain the multilateral trading system of the World Trade Organization and to continue to strengthen co-operation under multilateral frameworks such as APEC and the G20.

The consensus was reached ahead of the eighth China-Japan-ROK leaders’ meeting, to be held in Chengdu, Sichuan province, on Tuesday. It will focus on creating a vision for future co-operation and expanding common interests, according to the Ministry of Commerce.

Speaking on Sunday, Commerce Minister Zhong Shan called upon the other partners to give full rein to complementary industries, to improve the level of trade and investment co-operation and play a positive role in deepening regional economic integration and achieving sustainable development.

He said the three countries must enhance cooperation in the next stage in areas such as regional connectivity, creating solutions for an aging society, conversion of energy and developing digital technologies.

In addition to supporting the signing of the RCEP next year, Sung suggested the three nations should substantially expand their co-operation in areas such as developing fourth-party markets and making breakthroughs in the fourth industrial revolution to cultivate new industries and growth points.

Against the backdrop of increased downward pressure on the global economy and rising protectionism, Hiroshi Kajiyama, the Japanese minister of economy, trade and industry, stressed that it’s important to reach a comprehensive, high-level and mutually beneficial FTA for the three economies and to support reform of the WTO to protect fair trade and globalisation.

Trade volume between the three countries exceeded $720 billion last year, as they invested $11 billion in each other’s markets. More than 31 million individual cross-border trips were made, according to the Ministry of Commerce.

Meanwhile, Japan and the ROK remained China’s second-and third-largest trading partners, while China is the largest source of inbound tourists for both of those countries.

Huo Jianguo, a researcher at the China Centre for International Economic Exchanges in Beijing, said that because China, Japan and South Korea are three major manufacturing powerhouses and outbound direct investors in Asia, a trilateral FTA should upgrade the level of trade liberalisation for cargo, services and investment, and it must be comprehensive, high-level and beneficial to all three.

“It will also tap into the potential for trilateral economic and trade co-operation, enable deep integration of industrial chains and provide fresh momentum for the global economy,” he said.