For younger generations of Filipinos, the stories about the Second World War in the Philippines might seem like mere historical events found in books. Young enough to have not lived through the horrors of it, while living in times of peace and rapid technological progress, many of us find it difficult to imagine the country being plunged into war, especially one that’s not of its own accord.

But there was a time, less than a century ago, when a war broke out on the islands. In 1941, Japanese forces landed on Philippine soil, strafing the jungles, bombing airfields, setting on fire buildings and entire cities. The Americans fought back side-by-side with Filipinos from different parts of the country, some of whom came all the way from the hinterlands of Banaue and the valleys of Mindanao. Many were drafted on the spot. Outnumbered, outgunned, but never outclassed, they fought all the way through the bitter fall of Bataan, installing pockets of resistance in many provinces until the eventual surrender of the Japanese forces to the Americans.

While some of these fighters might have been untrained in military combat, all possessed sheer courage and patriotism in their hearts. Others even entered the war as young boys and girls— and came out at the end of it as men and women heroes. General Douglas MacArthur once praised the gallantry and supreme tactical skills of Filipino soldiers during World War II: “Give me 10,000 Filipino soldiers and I will conquer the world.”

Sadly, most of these stories have been relegated to the sidelines, shadowed by the subsequent retelling of the Americans. It’s high time that we look back on and remember the vast contributions of our forebears to Philippine liberty.

Here are some Filipino heroes who fought during World War II: 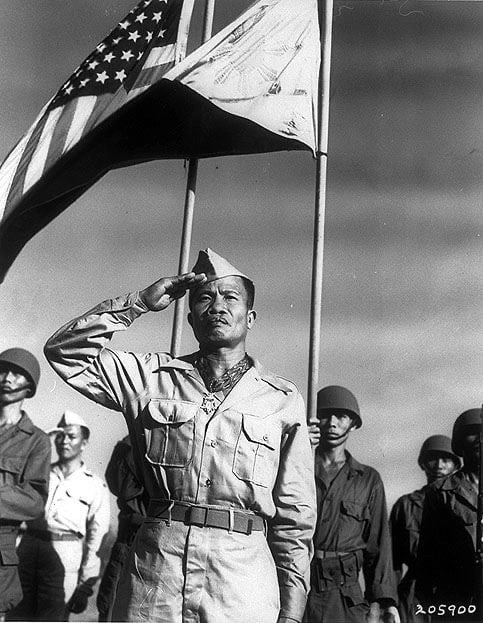 Photo via US Army Signal Corps

Hailing from Iloilo, Capt. Jose Calugas Sr. was a member of the Philippine Scouts of the United States Army. He completed training abroad as an artilleryman, later assigned to the 24th Artillery Regiment at Fort Stotsenburg in Pampanga.

In December 1941, Calugas was sent to Bataan for duty, as part of a unit covering the withdrawal of U.S. Army Forces Far East (USAFFE). Japanese troops were continuing their advance into Bataan, the last Philippine stronghold. While working as a mess sergeant in charge of a group of soldiers who were preparing the day’s meals, Calugas noticed that one of the 75mm field guns aimed at the Japanese flank had been silenced. Seeing that its crew was already killed, he made a bee-line for the inactive gun position, dashing a thousand yards across shell-swept area. Then, he quickly led a squad of volunteers who returned Japanese artillery fire. An expert marksman, Calugas hit the advancing Japanese tanks, which burned away the enemy’s ranks. As he and his men maintained steady fire on the enemy positions, other soldiers were given time to dig in and defend the line.

For his heroic deed, Calugas was awarded the Medal of Honor, the United States military’s highest decoration for valor.

Col. Jose T. Tando was born in Capiz and a graduate of Philippine Military Academy. He was promoted First Lieutenant due to his work in quelling rebel groups in Lanao, later rising through the ranks as Captain, then Battalion Commander of the 1st Philippine Constabulary Regiment under the USAFFE. In January 1942, he was promoted to the rank of Major, after fighting on the first salvo of bloody combats in Bataan.

A month later, after a period of recuperation, Col. Tando returned to the front. The second wave of battle saw Filipino troops gradually killed by the enemy’s fire. Tando didn’t want to watch while his men were being helplessly decimated. Instead, he crawled his way into the enemy’s bunker and threw a hand grenade, instant killing the Japanese machine gunner. The Japanese forces later retreated. The battle came to be known as “The Battle of the Points,” one of the most intense military fights recorded during World War II.

Upon recommendation of USAFFE, Tando’s gallantry earned him the Distinguished Service Cross in the field, and later the Service Cross. 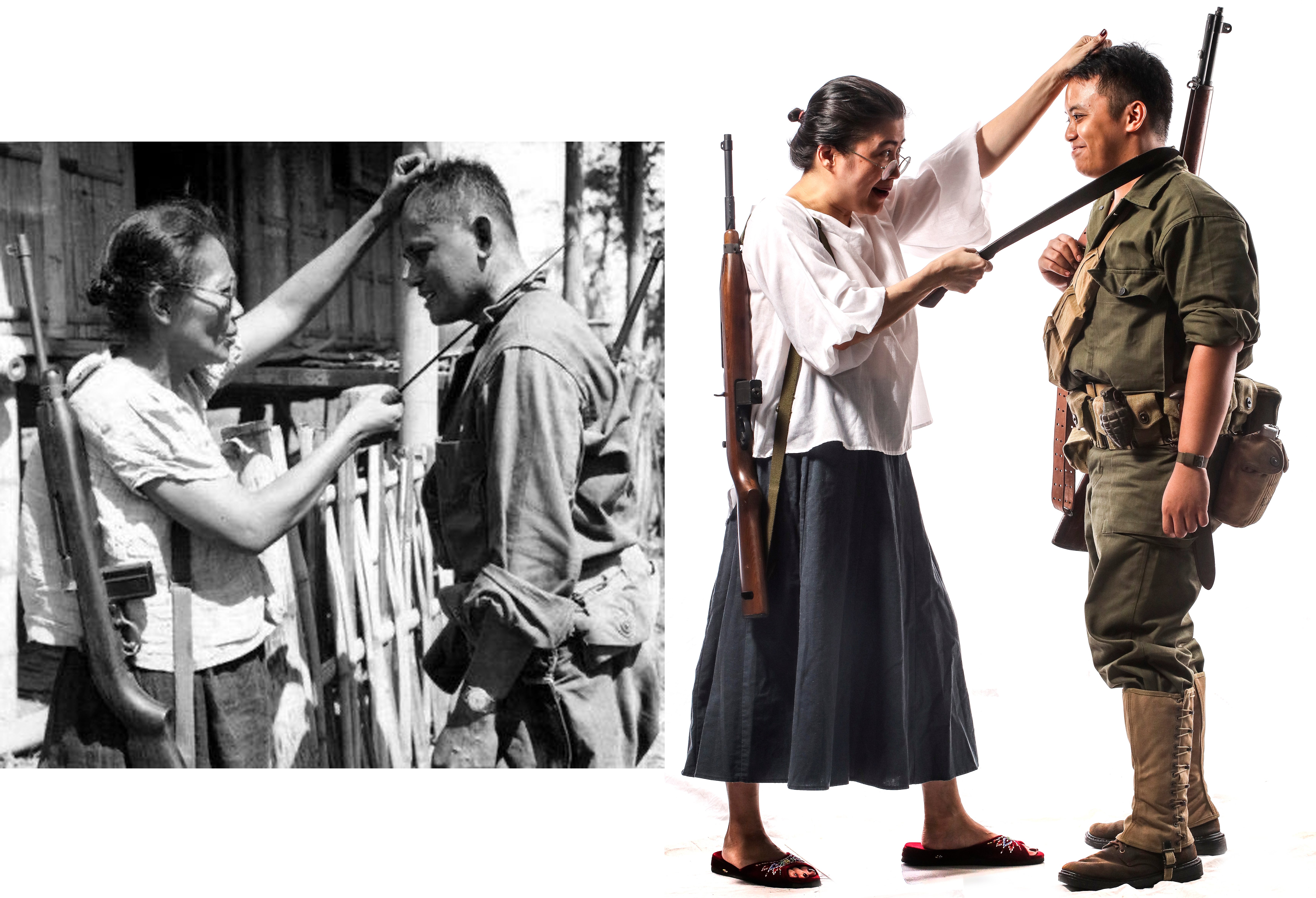 (Left) Guerilla Captain Nieves Fernandez shows Filipino US Army GI, Private Andrew Lupiba how to take out a Japanese soldier with a Bolo, Leyte, November 1944. Captain Fernandez is armed with a US supplied M1 Carbine, while Lupiba wears the standard US Army uniform and field equipment. (Right) Reenactment of the photo from the Philippine Living History Society.

Not all heroes during World War II were men. Many of them were women, some of whom fought alongside other revolutionaries in the hills and jungles as guerrilleras.

Capt. Nieves Fernandez was a gutsy former schoolteacher from Tacloban who worked with various rebel groups that fought the Japanese, collectively called as Hukbong Bayan Laban sa Hapon (HUKBALAHAP). At that time, Fernandez was considered as the only female guerilla commander in the Philippines, a distinguished merit that landed her in American papers. She commanded 110 men, whom she trained in combat skills and improvised weaponry, particularly the “paltik” and the use of gas pipes that were turned into rifles, loaded with gunpowder and rusty nails.

According to reports, Fernandez and her troops were responsible for slaughtering 200 Japanese in the Visayas area. Fernandez’s notoriety for killing the enemy reached the Japanese army, and a PHP10,000 bounty (roughly equivalent to PHP1.3 million in today’s inflation rate) was put out for her capture, dead or alive. She was never captured and lived well into her nineties. Fernandez was also instrumental in saving hundreds of young girls and women who were raped by the Japanese. One surviving photo of Fernandez shows her demonstrating to an army officer how she decapitated Japanese soldiers with a bolo. 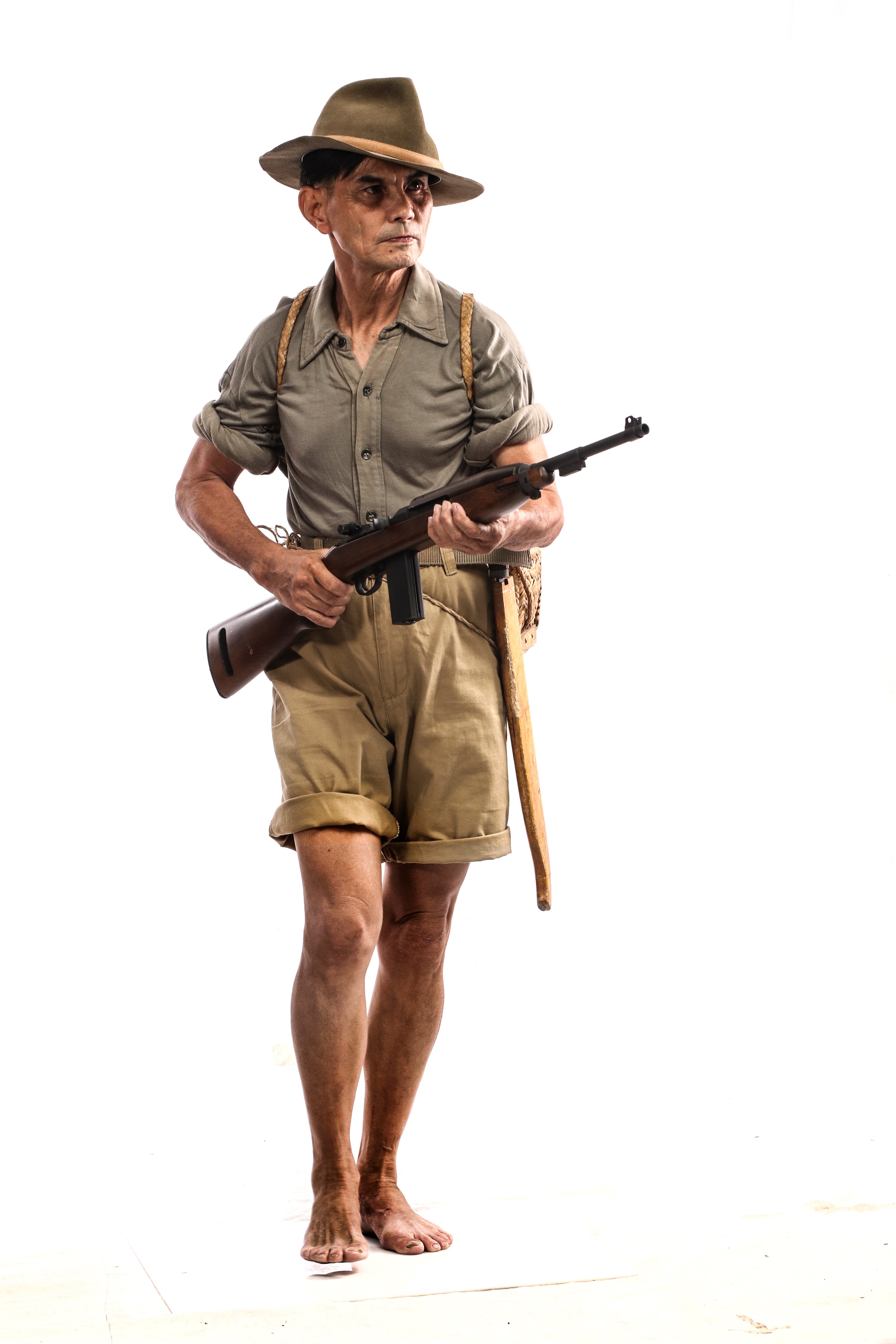 Filipino guerilla 1944, This guerilla is comfortably dressed in regular clothes and carries a US supplied M1 Carbine. The carbine was lightweight and a good size for Filipinos being much smaller than the M1 Garand. His side arm is a handy bolo and he carries a native wicker backpack. | Photo by Philippine Living History Society

In honor of the heroism and sacrifices of Filipino veterans during World War II, Philippine Veterans Bank has launched a campaign titled, “75th Philippine Liberation Trail – the Fight for Freedom.” This initiative will bring together the bank’s World War II-related programs such as the Mariveles-San Fernando-Capas Freedom Trail, the Bataan Freedom Run and other activities to commemorate the anniversary of the Second Great War in the country.

The Philippine Veterans Bank will also stage its traveling World War II exhibit in different malls around the country, showcasing photos and memorabilia of Filipino soldiers during the war, as well as forums on the vital role of Filipinos in WWII.

Through these events, Philippine Veterans Bank aims to spread awareness on the role of our Filipino veterans in the nation’s fight for independence, especially to younger generations, and to elevate the status of our war heroes, in books and in public discourse.

To know more about the events, visit www.facebook.com/VeteransBank/.