CALAEx is toll-free until February 2020 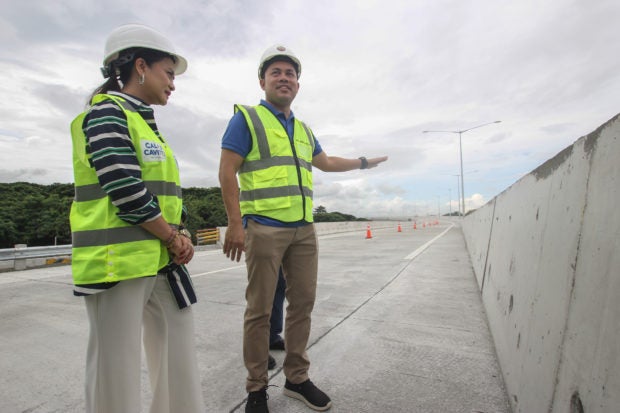 VITAL LINK Public Works Secretary Mark Villar (right) and Sta. Rosa City Mayor Arlene Arcillas on Oct. 30 led the opening of a 10-km section of the Cavite-Laguna Expressway, an important toll road that will link the provinces of Cavite and Laguna. –EARVIN PERIAS

SANTA ROSA, LAGUNA—The first section of the 45-kilometer Cavite Laguna Expressway (CALAEx) will be fully opened this week and will be toll-free through February 2020, Public Works and Highways Secretary Mark Villar said.

Villar said the first 10-km CALAEx section between the South Luzon Expressway (SLEx) Mamplasan Interchange and Santa Rosa, Laguna, was expected to receive a permit for 24-hour operations as early as today.

Villar, together with officials of MPCALA Holdings, a unit of Manuel V. Pangilinan-led Metro Pacific Investments Corp., led the final inspection of the segment on Saturday.

“It will be fully operational, meaning it can be used 24/7,” Villar said.

The segment, which is expected to serve some 10,000 motorists a day, has been operating for limited hours daily since Nov. 30 this year.

Villar said the estimated toll would be P4.50 a km or P45 for the entire 10-km stretch. Fees will be collected only starting February next year, he added.

CALAEx is designed to be a four-lane, toll expressway that will connect Cavite Expressway in Kawit to SLEx at their Mamplasan Interchange in Biñan, Laguna.

The tollroad, which will be finished by 2022, will cut the usual two-hour trip to around 45 minutes and serve about 50,000 motorists per day.

Once the permits are issued, the section will be fully operational and will be covered by MPCALA’s full time traffic management teams and emergency roadside services.

“We assure our motorists of continued hassle-free travel this Christmas season,” said Roberto V. Bontia, president of MPCALA. “We also expect CALAEx to further boost the development of the fast growing areas south of Metro Manila.”

CALAEx is among the Public Private Partnership projects awarded under the Aquino administration. Metro Pacific won the PPP deal in 2015 following a rebidding exercise.