Named after the ancient sailboat which took Malay settlers to the precolonial archipelago, the barangay is the most basic political unit of the society. Often equated to rural settings and small-scale government, it has evolved into a complex political entity, like the barangays of Makati City.

Such is the story of Barangay San Lorenzo, which sits on prime pieces of real estate, and is arguably among the country’s richest. With a land area of 1.73 sq km, it started as a masterplanned, post-World War II agricultural estate of the Ayala family, which attained the status of a regular barangay in 1972.

Designed as a suburban residence, San Lo, as it is fondly called, has grown into one of the nation’s top barangays, far from your typical next-door neighbor.

Often mistaken for the gated community of the same name, the barangay embraces the posh Legazpi Village and San Lorenzo Village itself, and bound by the busiest thoroughfares in the metropolis—Sen. Gil Puyat Ave., Epifanio Delos Santos Ave., Ayala Ave. and Amorsolo St.

Barangay San Lorenzo is home to Makati’s central business district, which covers the Ayala Center, luxury hotels and clusters of high-rise condominiums and office towers, and has the enviable but challenging task of overseeing the most sought-after real estate in the Philippine market.

With 8,130 registered businesses and a population of 13,000, San Lo is much like a self-contained mini-city or a first-class municipality, which has employment numbers and revenues that can easily surpass that of a province.

The barangay is also host to the prestigious Ayala Commercial Estate Association and the Makati Commercial Estate Association which are at the forefront of property development in that part of the city. And while being at the soil of a premiere barangay, San Lo’s role is limited to the issuance of business clearances while the bigger regulatory functions are referred to the city government.

Barangay Chairman Ernesto Moya said San Lorenzo is aligned with Makati City’s thrust of being a world-class, competitive and livable city, which they hope to translate down to the community level.

“We envision being a benchmark of excellence and global competitiveness in good governance, peace and order, wellness, environmental protection and equitable distribution of opportunities,” he said.

He added that as part of its mission, the barangay seeks to guarantee the health and safety of its constituents and transient population by formulating and implementing responsive policies. The barangay has its own traffic enforcers to maintain order in their jurisdiction, particularly along the streets of Amorsolo and Arnaiz.

Just like a regular barangay, it also has a wide array of programs to cater to its constituency, which is a unique mix of businessmen, residents, and the marginalized sector composed of house helpers and drivers.

Moya noted that among their major thrusts as a local government unit include health, disaster preparedness, business literacy and environmental sustainability, which are suited for a highly-urbanized barangay.

Its health personnel, he further revealed, can also attend to the medical needs of the employees of companies within their area of responsibility.

The barangay has an elected eight-person council which has formed working committees responsible for the beautification of environment, sanitation and health, infrastructure, public order and safety, youth and sports, education, culture and the arts, and social services, livelihood and cooperatives.

With a spanking headquarters inside the San Lorenzo Village, the barangay also works with the atmosphere and efficiency of a private firm being run by corporate professionals. It has a regular staff complement of 150, and scores of consultants for medical and dental services and on-call volunteers, which is about the size of a regular-sized municipality.

To conveniently reach its constituents, the barangay has put up two satellite offices in Legazpi Village—a medical and dental clinic at the Legazpi Active Park and an office for senior citizens at the Glass Tower Building along Palanca St. 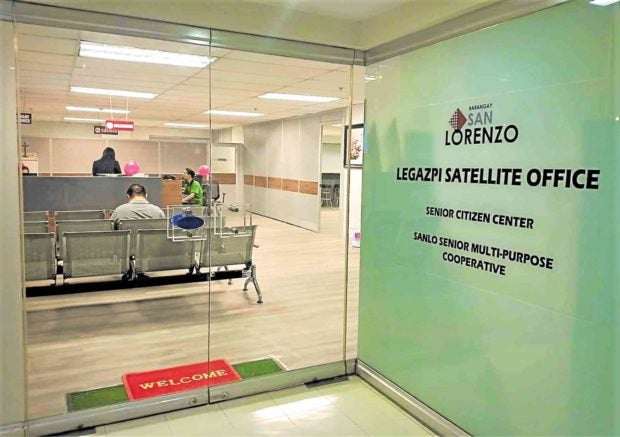 Moya noted that as a result of its good governance, Barangay San Lorenzo has also been constantly adjudged as the “Cleanest and Greenest Barangay”, the grand winner of the city’s Most Child-Friendly Barangay and Most Gender-Sensitive Program, among others.

As part of its continuing business literacy program for its constituency, Barangay San Lorenzo holds the annual Business Week to cater to the micro, small and medium enterprises.

An important partner in the business sector is the Barangay San Lorenzo Business Association, a non-government, non-stock, non-profit organization whose creation was initiated by the city government to encourage the culture of entrepreneurship at the community level.

A noteworthy venture is the 14-year-old Legazpi Sunday Market, an open-air, daytime stall which sells handicraft, organic produce, street food and an assortment of knickknacks. Located near the Washington Sycip Park in Legazpi City, the flea market is run by the barangay residents, especially by those who want first dibs into an enterprise.

While financially-endowed, Barangay San Lorenzo isn’t just about to have its marginalized sector remain at the margins of progress. It has instituted programs that would empower their trusty kasambahay, househelps and drivers educationally, economically and socially.

With a heart for people despite rapid gentrification, San Lorenzo is definitely not your usual next-door barangay.