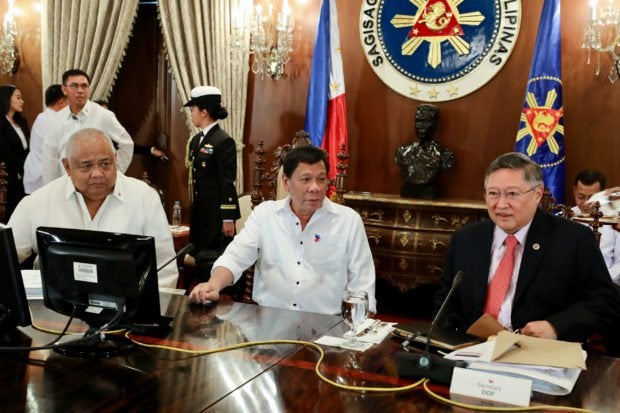 The table showed that the President’s approval rating across the Philippines in December rose from 78 percent of respondents in September.

Nationwide, disapproval of Duterte’s performance declined by 3 percentage points to 5 percent from 8 percent previously, while those who said they were undecided also declined to 8 percent in December from 14 percent last September.

But in the National Capital Region, the President’s approval rating declined by 2 percentage points to 78 percent, even as the rest of the country gave Duterte higher ratings than two months ago.

Reacting to the survey results, Dominguez said: “If I’m not mistaken, this is the first time ever that, at this point in any administration, that the President has reached this high… I think this is a historical high at any President from this stage.”

Pernia said the high approval rating of the President in December “doesn’t even include yet his calling attention to the two concessionaires about the onerous conditions—that’s something that will be welcomed by the people, for sure,” referring to Duterte’s order to review the contracts between the government and two concessionaires—Ayala-led Manila Water Company Inc. and Pangilinan-led Maynilad Water Services Inc. to distribute water in Metro Manila and surrounding areas.

“And the other thing that will be welcome also is the news about poverty reduction, which has been quite substantial,” Pernia added, referring to the drop in poverty rate to 16.6 percent in 2018 from 23.3 percent in 2015.