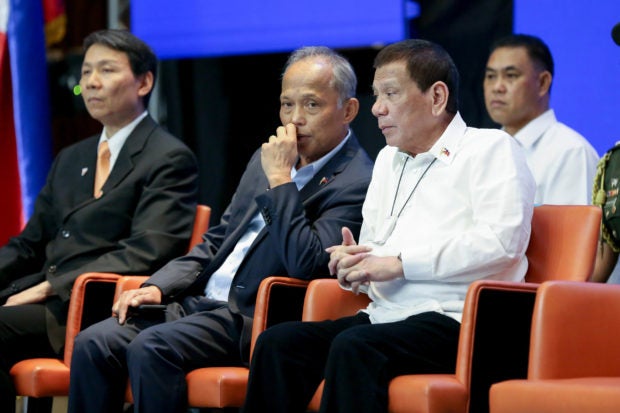 MANILA, Philippines – Inspired by a recent survey showing that the majority of Filipinos deemed that the Duterte administration was building infrastructure “better” than the previous government, the economic team on Friday approved 12 projects worth a total of P626.1 billion in order to roll them out early next year.

Also, the ICC-CabCom green-lighted the increase in cost as well as loan validity and implementation extension of the Samar-Pacific Coastal Road Project.

“After passing the ICC-CabCom, we’ll be able to release the projects by early next year, allowing us significant time within the Duterte administration to significantly complete these game-changing projects. It’s crucial that we start these projects—we’ll be working on the procurement, that’s why we fast-tracked all these projects before the end of the year so that next year, we can focus purely on the detailed engineering and procurement of these big-ticket projects. With all of these projects, they are good to go, and we can expect implementation will start sooner than later,” Villar said.

“What this does is it bucks up the pipeline of projects for the next administration,” Finance Secretary Carlos G. Dominguez III said, as Villar noted that when Mr. Duterte assumed the presidency in 2016, they only had P50 billion in infrastructure projects in the pipeline.

“Right now, we encompassed P1 trillion in projects, and still counting,” Villar said.
“When you do a project, you have to do all the studies before that. So we are now completing these studies. We will start as many projects as possible, and they will be ready just to be picked up by the next administration. So we are presenting the Filipino nation with a robust pipeline,” Dominguez said.

“We are well underway to covering most of the items in the new list of flagship projects, with a variety of projects—airports, bridges, highways and other ports, water ports and seaports also, to be covered,” Socioeconomic Planning Secretary and Neda chief Ernesto M. Pernia said, referring to the expanded “Build, Build, Build” pipeline now comprised of 100 big-ticket infrastructure projects.

Dizon, who is also president and chief executive of the state-run Bases Conversion and Development Authority (BCDA), shared a PulseAsia survey showing that 69 percent of respondents nationwide said the current administration was “better” than the previous administration in developing infrastructure in the country.

During the survey conducted on Dec. 3-8, 29 percent of respondents said the Duterte and Benigno Aquino III administrations had the “same” performance.

Only 1 percent said the current government was “worse” than the previous one in building infrastructure, while the remaining 2 percent replied they “can’t say.”

“Very clearly, 69 percent of the entire country feel that we now have better infrastructure. I think this is a testament to what the President started under his ‘Build, Build, Build’ program and what the various infrastructure agencies—DPWH [the Department of Public Works and Highways] and DOTr [the Department of Transportation] and other agencies have implemented over the course of the past three years. But as Secretary Dominguez said, we’re not stopping—this is just the beginning, and the projects that were approved today is, again, a testament to our decisiveness and our determination and our will to push these projects forward,” Dizon said.

Dizon said the ICC CabCom will again meet in January before forwarding their approved projects to the Neda Board chaired by President Duterte, to secure final approval early next year.