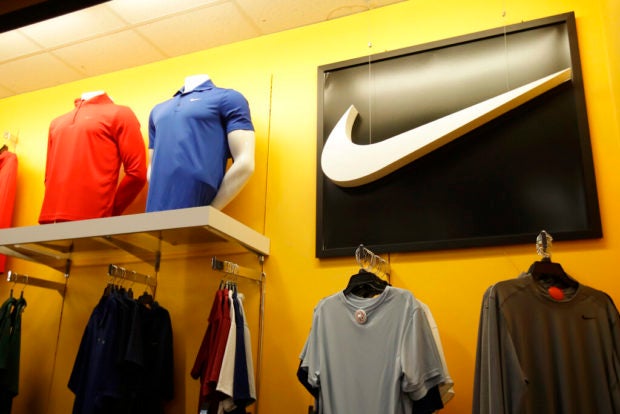 Nike clothes are displayed at a Kohl’s store in Colma, California. (AP)

The company’s revenues grew to $10.33 billion in the second quarter ending Nov. 30, up 10% from the same period last year. Analysts had been expecting $10.1 billion in revenue, according to Zacks Investment Research.

Nike’s North America sales, however, disappointed slightly at $3.98 billion, up 5% from $3.78 billion during the same period last year. Analyst had anticipated sales closer to $4 billion, according to FactSet.

Its net income rose 32% to $1.12 billion. Strong sales, a lower tax rate and a focus on selling more shoes at full price helped offset cost increases related to tariffs. Earnings per share rose to 70 cents, beating expectations of 58 cents per share, according to Zacks.

It was Nike’s first earnings reporting since announcing that CEO Mark Parker will step down early next year. He will be replaced by board member John Donahoe, who formerly ran e-commerce company eBay and was tapped to push forward Nike’s digital transformation.

The Beaverton, Oregon-based company has focused on building up its direct-to-consumer business through its own website, app and stores. The company launched a subscription service for children’s shoes last summer. Last month, it announced it will stop selling its sneakers and athletic gear directly to Amazon, ending a two-year-old pilot program with the world’s largest online retailer.

Selling sneakers directly to its customers gives Nike information on its shoppers that can help it design shoes in colors or sizes it knows they want.

Nike said its operating expenses rose 9% to $2.44 billion as the company invested in its NIKE Direct business and global operations.

The quarter covered a scandal-marked period for Nike, but the sneaker company’s sales have a history of shrugging of controversy.

In October, renowned track coach Alberto Salazar was banned from the sport for four years by the U.S. Anti-Doping Agency for running experiments with supplements and testosterone that were bankrolled and supported by Nike. Documents released by the USADA revealed that Parker was aware of the experiments.

Nike announced that it was shutting down its elite Oregon Project track and field program overseen by Salazar, though the company defended the coach against the allegations.

Parker, who will come Nike’s executive chairman in January, said he never had any reason to believe the tests violated doping rules.