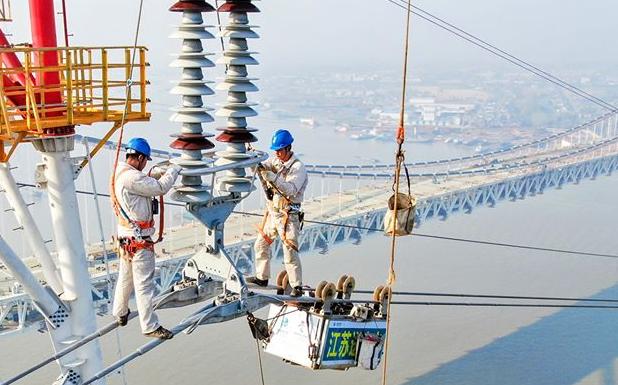 Worker of the State Grid Corp. of China working on part of the Wufengshan Line in Zhenjiang, Jiangsu. (Photo from the Facebook account of the firm)

BEIJING — A Chinese state-owned utility says it has bought 49% of the power distribution grid in the Gulf nation of Oman.

State Grid Corp. described the purchase as part of China’s multibillion-dollar Belt and Road initiative to build trade-related infrastructure across Asia to Europe.

State Grid released no financial details but said its tie-up with the Omani State Grid Corp. is the biggest Chinese investment to date in Oman.

The company, which operates most of China’s power distribution system, said it would draw on its technology and experience to improve the Omani grid.

State Grid is the world’s biggest utility but has made few investments abroad.

The Belt and Road Initiative calls for expanding trade by building ports, railways, power plants across an arc of more than 60 countries from the South Pacific through Asia and the Middle East to Africa and Europe.

The initiative has become an umbrella for Chinese development initiatives. Companies and Chinese government entities try to link new projects to Belt and Road to earn favor with the ruling Communist Party and secure official financing and other support.