Boeing to halt production of 737 Max airliner in January 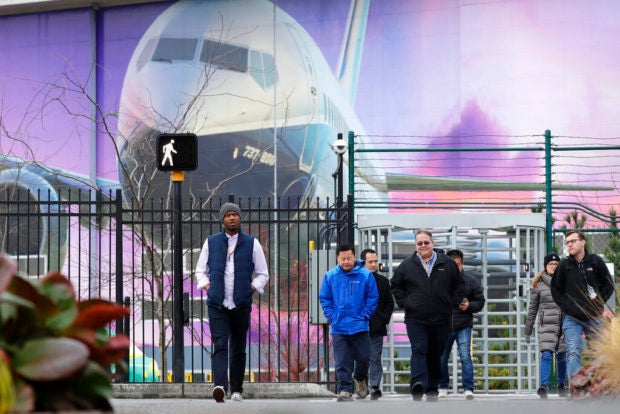 Boeing workers exit the plant in front of a giant mural of a jet on the side of the manufacturing building behind on Monday in Renton, Washington. (AP)

Boeing Co. said Monday that it will temporarily stop producing its grounded 737 Max jet starting in January as it struggles to get approval from regulators to put the plane back in the air.

The Chicago-based company said production would halt at its plant with 12,000 employees in Renton, Washington, near Seattle. But it said it didn’t expect to lay off any workers “at this time.”

The move amounts to an acknowledgement that it will take much longer than Boeing expected to win approval from the U.S. Federal Aviation Administration and other global regulators to fly the planes again.

The Max is Boeing’s most important jet, but it has been grounded since March after crashes in Indonesia and Ethiopia that killed total of 346 people. The FAA told the company last week that it had unrealistic expectations for getting the plane back into service. Boeing has missed several estimates of a return date for the plane, and the company didn’t give a date on Monday.

Even if no employees are laid off, ceasing production still will cut into the nation’s economic output, given Boeing’s huge footprint in the nation’s manufacturing sector. Through October of this year, the U.S. aerospace industry’s output has fallen 17% compared with the same period last year, to $106.4 billion, in part due to previous 737 Max production cuts.

The shutdown also is likely to ripple through Boeing’s vast network of 900 companies that make engines, bodies and other parts for the 737, and layoffs are likely.

In a statement, Boeing said it will determine later when production can resume, based largely on approval from government regulators.

“We believe this decision is least disruptive to maintaining long-term production system and supply chain health,” the statement said.

The company’s stock came under pressure Monday after the Wall Street Journal reported on the possibility of a Max production halt. It closed down $14.67, or 4.3%, at $327.

The stock slipped another 1% in after-hours trading following the company’s announcement of the production halt. It has fallen 23% since the March 10 crash of a Max flown by Ethiopian Airlines.