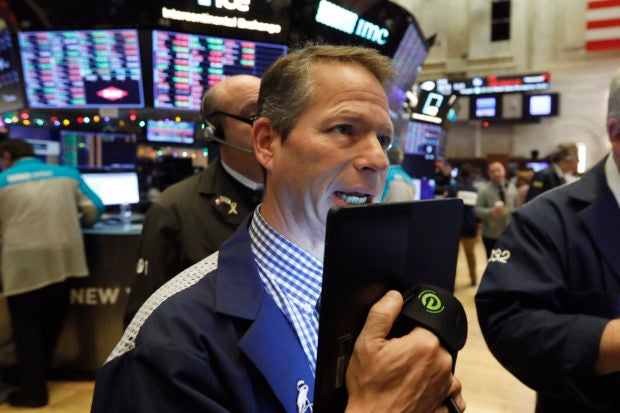 Surprisingly strong economic reports out of China helped drive the rally. Growth in factory activity and retail sales in the world’s second-largest economy both beat analysts’ expectations for last month.

The economic reports gave investors more reason for encouragement. The market got a big confidence boost late last week after the United States and China reached a long-awaited “Phase 1” trade deal. The trade pact removed some of the uncertainty that’s hung over businesses and investors.

“What’s important about it is that we’re not witnessing an acceleration in the trade war,” said Quincy Krosby, chief market strategist at Prudential Financial. “Right now, what the market is looking at is the possibility that we go into 2020 and we actually see global growth beginning to emerge, even if it’s not immediate.”

Monday’s wave of buying was broad, with roughly 85% of the stocks in the S&P 500 rising. The benchmark index capped last week with its third straight weekly gain as optimism over the U.S.-China trade deal put investors in a buying mood.

“With some trade uncertainty removed last week, investors should start feeling more confident that China will be able to keep their economy growing at 6% or better in 2020,” said Edward Moya, economist with Oanda.

The U.S. and China agreed last week to cut tariffs on some of each others’ goods and postpone other tariff threats, the first time the two countries have stepped back from the brink in their 17-month trade fight.

In return, China promised to ramp up its purchases of U.S. agricultural, energy and other goods and to stop forcing U.S. companies to turn over technology as a condition of doing business in that country.

The interim trade deal is one of a “trifecta of positive catalysts” that swept through the market last week and could help support it through the end of the year, Morgan Stanley strategists wrote in a research note. The others are a Federal Reserve that appears committed to keeping interest rates low and the potential for an orderly exit by the United Kingdom from the European Union following last week’s U.K. elections.

Technology stocks accounted for a big slice of the rally Monday. Micron Technology jumped 3.4% and Broadcom rose 2.4%. Tech stocks have had big swings in recent months with every hint of progress on the U.S.-China trade war because of how much business the companies do in China.

Benchmark U.S. crude rose 14 cents to $60.21 per barrel, close to its highest level in three months. Brent crude, the international standard, added 12 cents to $65.34 per barrel.

Higher rates can mean bigger profits for banks making loans and more interest income for insurers, brokerages and other financial companies. Bank of America and Wells Fargo each rose 0.8%. Financial stocks in the S&P 500 overall gained 0.4%.

Stocks that pay big dividends lagged the market because higher interest payments for bonds can lure away income-seeking investors. Real-estate investment trusts rose 0.3% for the smallest gain among the 11 sectors that make up the S&P 500.

Boeing fell 4.3% on a report that the company may cut production of its troubled 737 Max airplane or even suspend it all together. The Wall Street Journal said the company could announce a decision Monday.

International Flavors and Fragrances slumped 10.4% for the biggest loss in the S&P 500 after it said it’s merging with DuPont’s Nutrition and Biosciences unit in a $26.2 billion deal.