Christmas is the most awaited season in the Philippines with the Catholic faithful joyfully recalling the birth of Jesus Christ through religious and historical traditions. The church is usually at the center of the Christmas festivities with Filipino Catholics filling these spaces to the brim to take part in solemn celebrations.

One of these celebrations is the “Simbang Gabi,” a novena of dawn Masses which starts on Dec. 16. Hearing Mass in some of these churches—considered to be architectural marvels in their own way—can make your visit with families, loved ones and friends even more memorable.

San Matias Parish Church— more popularly known as the Tumauini Church since it is located in the town of Tumauini in the province of Isabela—is an ultra-Baroque church made entirely of red bricks with a four-story bell tower. The church’s facade features a magnificent display of the use of ornamented brick laid out in a characteristic design, with each brick customized to fit the wall and numbered for the correct sequence in the design. 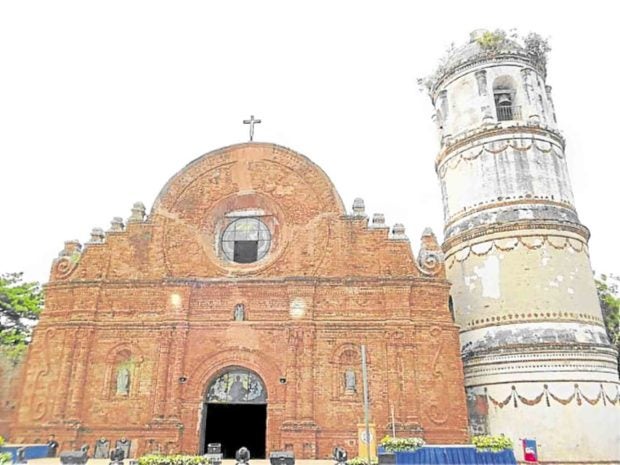 Originally built in 1707 by a Dominican priest, the church was first made of nipa and light materials. The current structure was constructed in 1783 and was completed in 1805. It was partly damaged during World War II but it was repaired and faithfully reconstructed into its original form by the townspeople.

On Feb. 24, 1989, the National Historical Commission of the Philippines declared San Matias Parish Church a national historical landmark. The National Museum later declared it a National Cultural Treasure. It is also among the churches being considered for addition to the Unesco World Heritage Sites, being in the tentative list under the Baroque Churches of the Philippines (Extension).

Mary Immaculate Parish Church, also known as the “Nature Church,” was built in 1986 and designed by the late National Artist for Architecture Francisco “Bobby” Mañosa. The church is a landmark structure in a complex which spreads over a 4,000 sqm mango orchard beside a flowing creek in Moonwalk Subdivision, Las Piñas City. 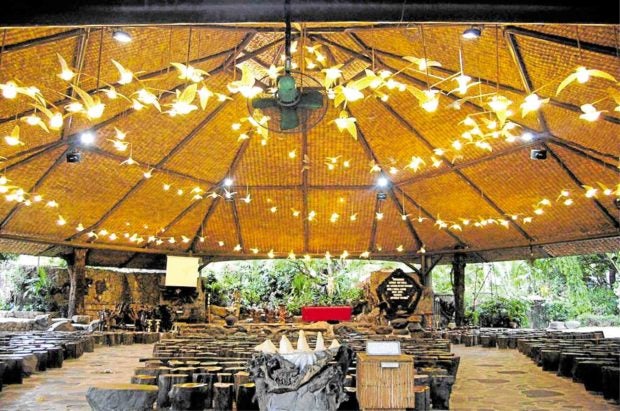 True to the nature concept of Mañosa, the church, built as open structure, stands under a canopy of mango boughs while tropical palms and plants conceal the altar section from the street, providing privacy for prayer and meditation. Its roof is pitched like a tent and covered with anahaw. Capiz lanterns, depicting doves in flight, illuminate the church while the pews were made out of tree stumps and logs felled by past typhoons.

St. Joseph Church, known as Barcelona Church, has a baroque-style, dome-like structure that makes it stand out. An important historical and cultural property of the province, the church is located near the Fort Ruins which are remnants of the Spanish-era municipal hall, fortress and school house built from huge stone slabs from the sea, and used egg whites mixed with tuba (coconut wine) and lime as binder. 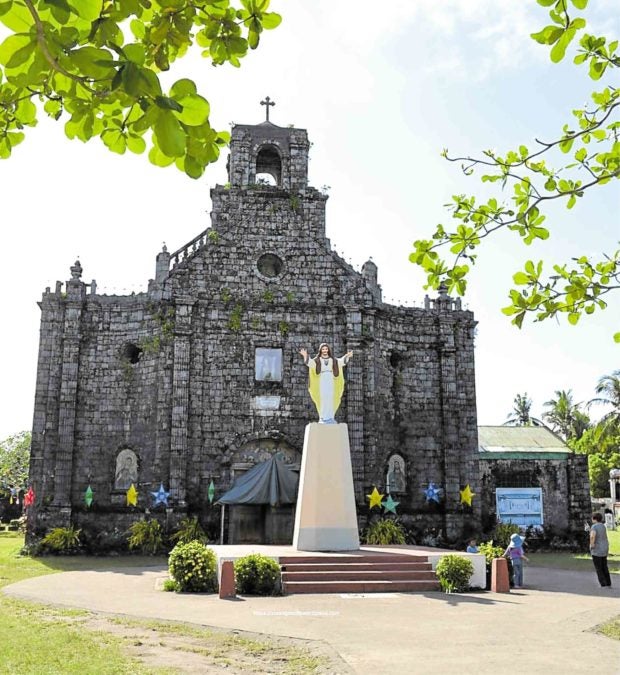 Construction of the church began in 1874 during the term of Gobernadorcillo Juan Evasco.

Since then, the church has withstood time and the elements. The church’s stone walls and bell tower, still in their original form, are made of coral rocks and plastered with the use of lime without cement and steel bars. Beautiful stained-glass windows also decorate the church’s interior.

Designed by the late National Artist for Architecture Leandro Locsin, the Monastery of the Transfiguration in Malaybalay City in Bukidnon is an icon both for religious and for aesthetic reasons.

A hilltop, pyramid-shaped Benedictine church, the unique design and location of the monastery, where agricultural products grow, makes it an ideal place for scenery and serenity. Most importantly, the monastery is a place of guidance and peace that offers people the solitude and peaceful ambiance needed for prayers. 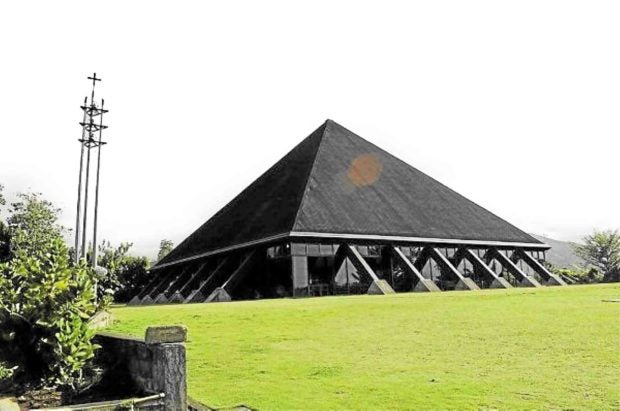 The monastery is open to the public for masses, and the occasional breakfast with the monks where guests can savor the organic Monks Blend products. The monastery also offers a tranquil retreat for people who seek spiritual renewal and inner reflection.

Surrounded by the picturesque terrain of Bukidnon province, the calming voices of the Benedictine monks chanting their prayers also provide a one-of-a-kind spiritual environment.

Commended by Unesco as among the best surviving example of “Fortress Baroque,” the Church of Saint Thomas of Villanova in Iloilo—commonly known as the Miag-ao Church—gained global popularity for its facade depicting a detailed relief structure including St. Christopher carrying the Christ Child on his back amid coconut, papaya and guava shrubs, giving it a unique native touch.

Designed to protect the community from invasions, the church was built on the edge of a hill, the highest elevation of the town overlooking the sea and the Miag-ao river. 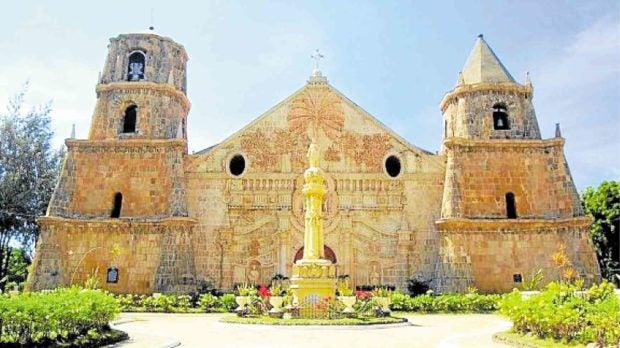 The 222-year-old church, listed as one of the World Heritage Sites by Unesco in 1993, was built using adobe and limestone, making it light brown in color. Two bell towers support each side of the church—one towering two stories and the other three stories high. The church has a simple interior, but is highlighted by a striking gold-plated retablo.

Dubbed as the Philippine version of the Vatican’s Sistine Chapel, the Church of Santiago de Apostol in Betis, Guagua, or Betis Church, is known for its rich interior detailing, especially its dramatic frescoes and mural.

One of the first two “visitas” or chapels established in 1572 by the Augustinians in Pampanga, the Baroque church is 50 meters long, 12 meters wide and 10 meters high with hardwood flooring that has survived lahar and floods through the years. In 2001, it was declared by the National Museum as a national cultural treasure. 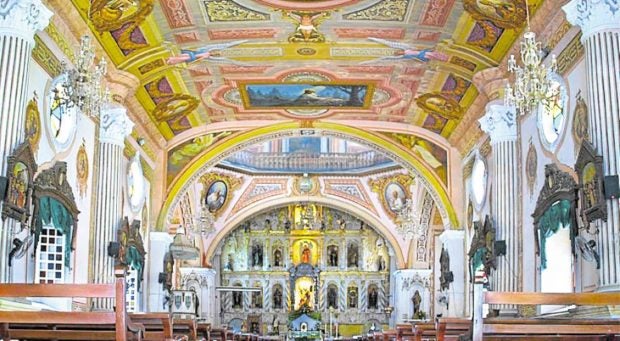 The church’s main door was carved with figures showing Jacob’s dream of a stairway to heaven, installed by late sculptor Juan Flores, a native of Betis.

At the center of the church is a retablo featuring an assembly of wooden statues of St. James, St. Augustine and the Augustinian saints. It also features the images of Peter and Paul, God the Father, and Mary. The retablo was earlier hailed by National Museum as the “most beautiful” in Central Luzon.

Among the paintings on the church’s ceiling are the second coming of Christ, Jesus in Gethsemane, the fall of Adam and Eve, the Last Supper and the images of Moses, Elijah and the Gospel writers.