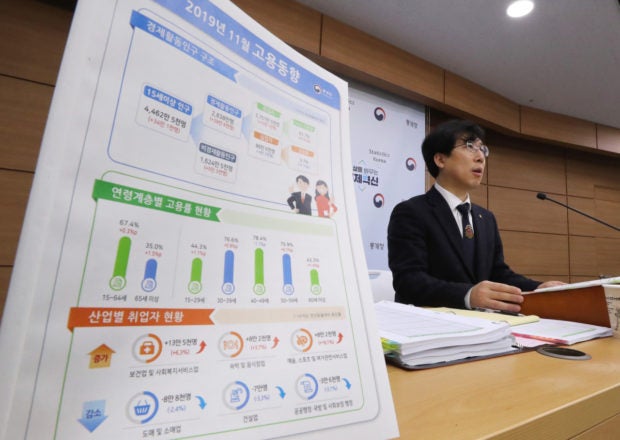 Chung Dong-wook, head of employment data at Statistics Korea, talks in a press briefing on Wednesday. Yonhap via The Korea Herald/Asia News Network

The downtrend in employment continued, however, for those in their 40s, reflecting the sluggish market situation in the retail and manufacturing sectors.

The number of newly added jobs last month stood at 27.5 million, up 331,000 from a year earlier, keeping the on-year increase above the 300,000 mark for four months straight, according to data from Statistics Korea.

The overall employment rate — the ratio of job holders to people aged 15 or more — came to 61.7 percent, up 0.3 percentage point from a year earlier.

This was also the highest figure observed since 1982, when the government started tallying job statistics under current standards.

The jobless rate was tallied at 3.1 percent, down 0.1 percentage point on-year, hitting its lowest level for any November since 2015. The total number of jobless people came to 866,000 last month, down 43,000 or 4.7 percent from a year earlier.

The youth jobless rate — for those aged between 15 and 29 — was 7 percent, the lowest level for any November since the 6.7 percent observed in 2012.
The health care and social welfare sector added the highest number of jobs, gaining 135,000 or 6.3 percent on-year. It was followed by the arts, sports and leisure service sector, which added 82,000 new jobs during the same period.

The lodging and restaurant industry, which began an uptrend in employment in February this year, also gained 82,000 new jobs on-year in November on the back of increased numbers of inbound travelers, according to the statistics office.

The nation’s backbone manufacturing sector, however, continued to struggle. The number of newly added jobs came to 26,000 last month, down 0.6 percentage point from a year earlier, extending the downtrend for 20 consecutive months.

The wholesale and retail, construction, public administration and finance sectors all remained on a downtrend in terms of newly added jobs.

While overall job creation levels remained strong, the number of jobs for those in their 40s fell 1.1 percent on-year in November, marking the steepest fall since December 2009 and continuing a downtrend that has lasted for 49 months straight.

“People in their 40s tend to be the most affected by retail and manufacturing business trends,” said Chung Dong-wook, head of employment data at Statistics Korea, in a press briefing.

While the latest figures reflect signs of solid recovery in the local job market, uncertainties continue due to the aging population and external challenges, according to the Ministry of Economy and Finance.

Asia’s fourth-largest economy has been weighed down by ongoing US-China trade tension, as well as by the cyclical downturn of the global semiconductor business.

The economy expanded 0.4 percent during the third quarter this year, marking a slowdown from the 1 percent it posted in the previous quarter.

Also, the trade-dependent economy’s exports shed 14.3 percent in November from a year earlier, extending their downturn for 12 months straight, according to the Ministry of Trade, Industry and Energy.

AFP warns Facebook: ‘Enemies of the state’ using you