US stocks dip ahead of looming weekend deadline on trade

NEW YORK  – U.S. stocks edged lower on Tuesday ahead of a looming weekend deadline for trade talks between Washington and Beijing. 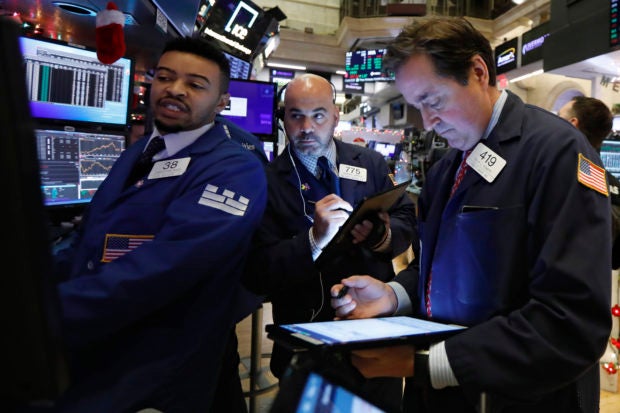 A new round of U.S. tariffs is scheduled to take effect on Chinese goods Sunday, the latest escalation in a trade dispute that has dragged on economies around the world. But media reports suggested the U.S. may delay the tariffs on phones, laptops and other popular products as the two sides negotiate a limited “Phase 1” deal.

The S&P 500 flipped repeatedly between small gains and losses throughout the day, and the market was nearly evenly split between losers and winners as markets await more certainty about what the rules of global trade will be. Losses for Comcast, Netflix and other communications companies weighed most heavily on the market, but gains for health care and energy stocks helped limit the damage.

Sunday’s deadline isn’t the only big potential event for markets in the coming days. The Federal Reserve and European Central Bank will make decisions on interest rate policy this week. Big moves by both of them earlier this year helped send prices for stocks and bonds around the world surging. A report will also arrive Wednesday on inflation in the United States, which is key because tame inflation has allowed the Fed to keep interest rates low.

Investors are nearly unanimous that the Fed will vote Wednesday to keep interest rates steady.

The biggest wild card for stocks recently has been trade, though, and markets have been swinging on every iota of progress in talks between Washington and Beijing. The longstanding conflict has hurt manufacturing around the world and caused U.S. businesses to hold back on making investments. The saving grace for the economy has been a strong job market and consumer spending, and the economy grew at a 2.1% annual rate in the third quarter.

“The market does seem to be pricing in somewhat good news,” said Mike Dowdall, investment strategist at BMO Global Asset Management. “And by good news, I define that as tariffs not going into effect. But beyond that, it’s quite unclear.”

That long-term perspective in any potential deal is likely to be the most important thing for markets.

“The real issue is not the exact details or timing, but the durability,” said David Kelly, chief global strategist at JPMorgan Funds. “Multiple changes of direction on trade over the last few years means nobody can trust that what we’re headed for here is a durable peace, rather it is a fragile cease-fire.”

Elsewhere on the trade front, Democrats in the House of Representatives and the White House announced a revised deal with Mexico and Canada. The deal would replace the North American Free Trade Agreement and would offer more provisions for U.S. workers.

Bond trading was nearly as quiet as stock trading was. The yield on the 10-year Treasury held steady at 1.83%, the same as late Monday.