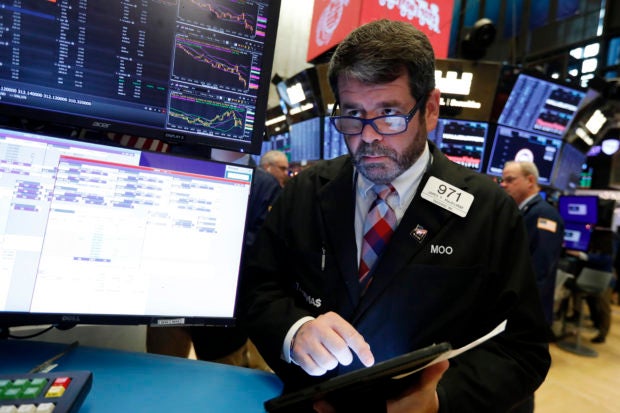 FILE- In this Dec. 5, 2019, file photo trader James MacGilvray works on the floor of the New York Stock Exchange. Stocks are opening mixed on Wall Street on Monday, Dec. 9, as investors weighed the possibility of more U.S. tariffs on China kicking in. (AP Photo/Richard Drew, File)

The selling snapped a three-day winning streak for the S&P 500 and wiped out the index’s 0.2% gain last week.

Trading was mostly muted as investors looked ahead to a busy week of economic reports and an interest rate policy update from the Federal Reserve. The market also remained focused on developments in the trade negotiations between the U.S. and China.

Both sides have been working toward a limited “phase 1” deal that investors hope can at least avert new U.S. tariffs from kicking in on $160 billion of Chinese imports on Sunday. That would raise prices on key products, including cell phones and laptops, and threaten to affect consumers.

“With the deadline being Sunday, most people don’t think that new tariffs will be put in place, but they also don’t expect a phase 1 (deal) to be signed this week,” said Sam Stovall, chief investment strategist at CFRA.

After strong gains in November, U.S. stock indexes have mostly pulled back this month ahead of the scheduled rollout of new U.S. tariffs on Chinese goods this weekend.

A Chinese official said Monday that the nation wants a prompt settlement, but gave no details on progress toward a potential deal. China made a conciliatory gesture last week when it said it would waive tariffs on American soybeans and pork.

Technology sector stocks, which have been particularly sensitive to developments on trade because many of the companies rely on China for sales and supply chains, helped drag the market lower Monday. Apple fell 1.4% and chipmaker Micron Technology slid 3.1%.

Shares in ArQule more than doubled on news that Merck agreed to buy the small biotechnology company for $2.7 billion. ArQule is in the early stages of studying potential treatments for conditions including leukemia. Merck inched 0.1% higher.

Sanofi made a similar play, spending $2.5 billion for Synthorx, which is also in the earlier stages of testing cancer treatments. Sanofi fell 1.6% and Synthorx jumped more than threefold.

In other deal news, health insurer United HealthGroup said it is buying Diplomat Pharmacy to help bolster its pharmacy benefits unit, OptimRx. The deal is being made at a steep discount, which sent Diplomat’s stock plunging 32.7%. UnitedHealth dropped 0.9%.

PG&E vaulted 15.9% following late Friday’s news that the California utility has reached a tentative $13.5 billion settlement that resolves all major claims related to the deadly, devastating Northern California wildfires of 2017-2018. The blazes were blamed on PG&E’s outdated equipment and negligence. The deal, which still requires court approval, represents a key step in PG&E’s exit from Chapter 11 bankruptcy.

Wall Street is in for a busy week of economic reports culminating in a key update on whether Americans are still spending at a healthy pace.

Investors will get a revised report on worker productivity for the July-September quarter on Tuesday. Data released in November showed a decline for the first time since late 2015. On Wednesday the government will release its November report for consumer prices, which have been rising at a modest rate this year. A gauge on producer prices will be released on Thursday.

The Commerce Department’s report on retail sales coming up Friday is possibly the most important update this week. The economy has been propped up in part by solid spending and job growth.

Meanwhile, the Federal Reserve is scheduled to deliver its latest economic and interest rate policy update on Wednesday after a two-day meeting of its policymakers. The central bank is widely expected hold off on making any changes to interest rates.

“The market does not expect a rate cut in December, but is probably still holding out for one or two in 2020,” Stovall said. “We think the Fed is going to sit pat and not really do anything.”

The Fed cut interest rates three times this year in a bid to buttress economic growth. That nearly reversed four rate hikes in 2018. The Fed has signaled that it will hold off on any additional rate cuts while the economy remains healthy.