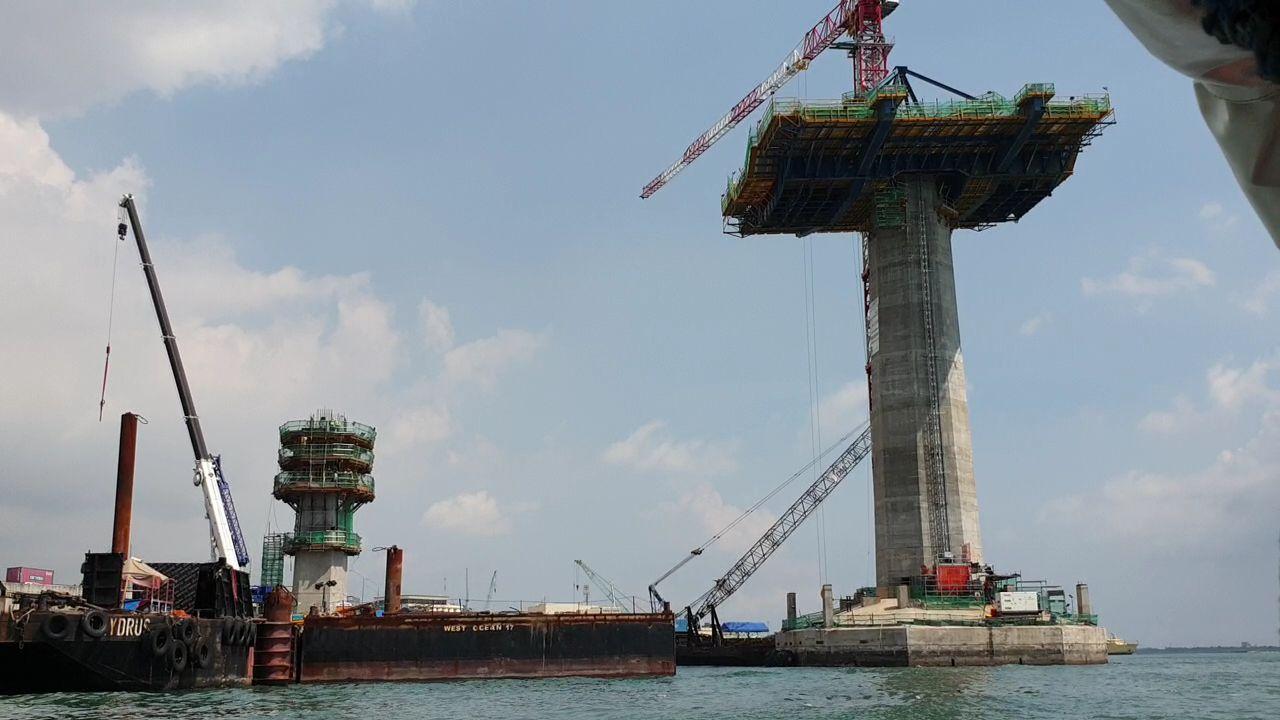 The P30-billion tollway bridge of the Cebu-Cordova Link Expressway is now 47.32 percent complete and will be open in the middle of 2021. (DALE ISRAEL/INQUIRER)

CEBU CITY –– There will be no closure to the busy marine traffic of the Mactan Channel in Cebu as the third Mactan-Cebu bridge starts installing the beams over the navigational waters by January 2020.

Project consultant Robert Uthwatt said they would employ modern engineering methods where construction works are done above while allowing the marine vessels to continue passing below the two-tower bridge pylons.

Among the technology being used are computerized self-climbing cranes that act as a platform on top of the tower.

It carries the pre-fabricated concrete slabs that will be placed on the bridge. This, in turn, will free the navigational waters from any construction work.

This technology and the bridge itself will be featured in one of the shows of National Geographic that showcase mega infrastructures around the world.

The bridge is also expected to withstand a 7.5-magnitude earthquake based on the assessment as the highest possible quake in the Cebu area.

The P30-billion tollway bridge of the Cebu-Cordova Link Expressway (CCLEX) is now 47.32 percent complete and will be open in the middle of 2021, in time for the celebrations of the 500 years of Christianization of the Philippines which started in Cebu.

The twin pylon towers of the bridge will have four lighted crosses on each side to symbolize the 500 years Christianization of the country. The twin pylons are expected to be 145 meters tall and to be a new icon and tourist attraction for Cebu.

The 8.5-kilometer CCLEX, including the bridge facility, is a build-operate-transfer scheme of the governments of Cebu City and Municipality of Cordova on Mactan Island.

This means that the subsidiary of Metro Pacific Tollways corporation will operate the bridge for 35 years.

The new bridge in 2021 is expected to ease the traffic congestion of the two existing Mactan-Cebu bridges connecting Mandaue City and Lapu-Lapu City on Mactan Island.

The third bridge, on the other hand, is connecting Cebu City and Cordova in Mactan Island bypassing Mandaue and Lapu-Lapu cities. The second biggest airport in the country, the Mactan-Cebu International Airport, is located on Mactan Island.

CCLEX broke ground in March 2017 with the help of Cebu Link Joint Venture, a construction consortium consisting of Spain’s Acciona Construccion and Filipino companies First Balfour and DM Consunji. It also taps the expertise of Cowi A/S of Denmark and Norwegian Norconsult.

At present, the bridge causeway is being completed, while one-third of the twin pylons’ height has been achieved.

The smaller causeway bridges are also being pile-driven as they start to link up with the Cebu South Coastal Road.

The bridge also has a navigational clearance of 50 meters, allowing bigger vessels to pass through it.

CCLEX said they expect 50,000 vehicles to use the bridge daily.

The construction employs at least 1,800 workers.

Read Next
Premyo bonds: Going, going, gone soon
EDITORS' PICK
NCR’s COVID-9 alert level may be downgraded from 3 to 2 soon — DOH
Isko Moreno bares ‘two-pronged’ approach to rehabilitate MSMEs
What’s at stake for every fighter at ONE: NextGen
Legarda emphasizes role of ICC/IPs in nation building this IP month
Climate Change Commission and Nestlé PH to discover sustainability-focused solutions
Gordon calls 2 Pharmally execs ‘Senate fugitives’ after no-show in probe
MOST READ
LJ Reyes says Paolo Contis made ‘no efforts’ to talk to her after their split
Yang’s Princeton degree raises eyebrows among senators
Drivers with no traffic violations can now renew licenses for 10 years
Gordon to Duterte: You? Teaching me courtesy?
Don't miss out on the latest news and information.