Stocks closed broadly higher Wednesday amid renewed hopes on Wall Street that a U.S. trade deal with China may be nearing, despite tough recent talk from President Donald Trump. 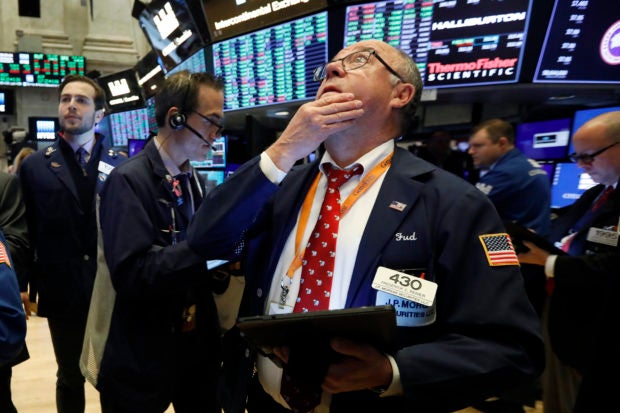 Trader Frederick Reimer works on the floor of the New York Stock Exchange, Wednesday, Dec. 4, 2019. Stocks are opening broadly higher as traders became more hopeful that a trade deal between the U.S. and China was making progress. (AP Photo/Richard Drew)

The gains snapped a three-day losing streak for the S&P 500, though the benchmark index remains on track for a weekly decline.

The market has swung sharply for months on every hint of progress about talks between the world’s largest economies, and the latest flip-flop followed a report from Bloomberg News saying U.S. negotiators expect a “Phase 1” trade agreement to be completed before U.S. tariffs are set to rise on Chinese products Dec. 15.

The report came a day after Trump said he wouldn’t mind waiting until after the 2020 elections for a deal, a remark that officials reportedly called off the cuff but nevertheless sent markets skidding.

“The trade war will be the key driver of sentiment in the immediate few weeks,” DBS Group analysts wrote in a report.

Treasury yields also recouped some of their sharp drops from earlier in the week. Rising optimism on trade means less demand for safe investments, and when prices for Treasurys fall, their yields rise.

The stock gains are the first so far this month since the market closed out a strong November rally that brought major indexes to all-time highs.

Surprisingly good company earnings and solid economic data have helped keep investors in a buying mood this fall against a backdrop of optimism that the U.S. and China were nearing a trade deal.

Beyond China, Trump has been pushing ahead on trade disputes all around the world recently. On Tuesday, he proposed tariffs on $2.4 billion in French products in retaliation for a tax on global tech giants including Google, Amazon and Facebook. That follows a threat Monday to raise tariffs on steel and aluminum from Argentina and Brazil.

The trade war has hurt manufacturers and weighed on economic growth around the world. Central banks have cut interest rates and unloaded stimulus to help spur growth. In the U.S., a strong job market is helping to prop up the economy.

A report on the U.S. job market came in surprisingly weak, which could raise doubts about what’s been the strongest part of the economy. Private employers added just 67,000 jobs last month, according to payroll processor ADP. That’s roughly half of October’s hiring pace and weaker than economists expected.

The more comprehensive jobs report from the Labor Department will arrive on Friday, and it will likely have a bigger impact on the market.

A separate report showed that U.S. services industries grew last month, but not as quickly as economists expected.

“This market is trading under the assumption that global growth has put a bottom in and is in the process of recovering, and nothing in the data we’ve seen today disputes that conclusion,” said Scott Ladner, chief investment officer at Horizon Investments.

A rebound in the price of crude sent oil-related stocks to the market’s biggest gains. Energy stocks in the S&P 500 rose 1.6% for the biggest gain among the 11 sectors that make up the index. Halliburton rose 4.2%, and Devon Energy added 4.6%.

Expedia Group climbed 6.2% after the company shook its leadership and expanded its stock buyback program.