Forever war: US and China struggle to defuse trade conflict 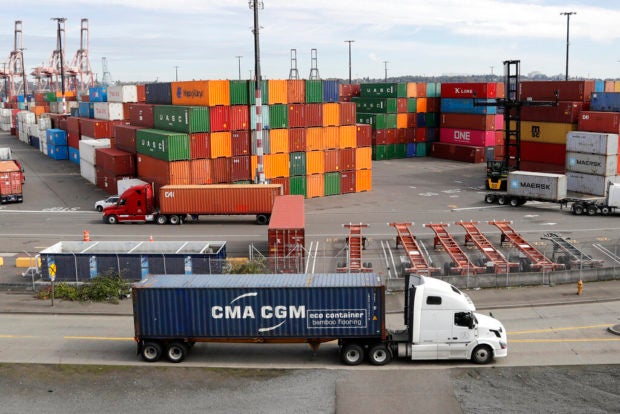 WASHINGTON — Businesses and investors have been nervously monitoring U.S.-China trade talks for months, hoping the world’s two biggest economies can de-escalate their trade war and restore some predictability to global commerce.

President Donald Trump delivered another setback to the optimists Tuesday, saying he was willing to wait until after the 2020 elections to close a deal with Beijing.

His comments came a day after Trump unexpectedly reversed his own policy on a separate trade front and pledged to tax steel from Brazil and Argentina. On top of that, his administration proposed to target $2.4 billion in French imports in a retaliatory move over France’s new digital tax. The Trump administration says France’s tax unfairly targets American tech giants like Google, Amazon and Facebook.

Trump’s mercurial statements and actions on trade have rattled investors this week. In late morning trading Tuesday, the Dow Jones Industrial Average was down about 400 points.

Dan Digre has long since stopped expecting much from U.S. negotiations with China. He’s heard it all before.

Digre’s 70-year-old family firm, Misco Speakers in St. Paul, Minnesota, is caught in the crossfire of the U.S.-China conflict. Misco is absorbing Trump’s tariffs on the parts it buys from China for the specialized speakers it makes for the aircraft and medical device industries, among others.

“I’m hopeful that something will happen, but I’m not optimistic,’’ Digre said. “There have been so many false deals: A deal is close, a deal is close — then nothing.’’

Both sides may have an incentive to reach a deal before Dec. 15. That’s when the Trump administration is set to start taxing an additional $160 billion of Chinese imports. These tariffs would hit many Chinese-made goods that are on holiday shopping lists — smartphones and toys, for example — and would extend Trump’s tariffs to just about everything China ships to the United States.

A former Trump administration official who has been briefed on the talks and requested anonymity to speak frankly said the U.S. is considering delaying the Dec. 15 tariffs if the talks go well — but keeping the option to restore the tariffs if no progress is made toward a more comprehensive agreement.

The signs have been mixed.

Last week, Trump said “We’re in the final throes of a very important deal.” And China’s Commerce Ministry reported that its negotiator, Vice Premier Liu He, had spoken by phone with his U.S. counterparts, U.S. Trade Representative Robert Lighthizer and Treasury Secretary Steven Mnuchin. The official Xinhua News Agency said the men had discussed their “core concerns’’ and “agreed to maintain communication on remaining issues in consultations on the Phase 1 deal.”

Earlier, China had made goodwill gestures, issuing improved guidelines for protection of patents, copyrights and other intellectual property and lifting a five-year ban on American poultry.

Then Trump’s comments Tuesday seemed to suggest that a breakthrough might not come anytime soon.

It’s been a year and a half since Trump declared that “trade wars are good, and easy to win.’’ But his war with China has dragged on and on, with each side imposing — and raising — import taxes on hundreds of billions of dollars of each other’s goods. Those taxes are paid by companies that import those goods. These importers must either absorb those higher costs or pass them on to customers in the form of price increases.

Negotiators have met 13 times. Truces have come and gone. Predictions of peace have proved premature.

For now, at least, the reality remains: The United States is taxing more than $360 billion worth of Chinese imports, and Beijing is retaliating with tariffs on $120 billion of American products. Not since the 1930s has the world seen such intense trade warfare.

The two sides are fighting over allegations that China has deployed predatory tactics in its drive to achieve global dominance in such advanced technologies as quantum computing and electric cars. The administration asserts, and many China analysts agree, that these tactics include stealing sensitive technology, unfairly subsidizing their own firms and forcing foreign companies to hand over trade secrets as the price of admission to China’s market.

On Oct. 11, Trump had announced what he cast as a breakthrough: Beijing had agreed to buy far more U.S. farm products — as much as $50 billion worth annually, the administration said — and to better protect intellectual property. In return, the United States suspended plans to raise tariffs on $112 billion in Chinese goods.

Even though this so-called Phase 1 deal left the thorniest issues for future negotiations, the two sides still haven’t managed to finalize it.

“It now looks likely that a Phase 1 deal will be rather limited in scope, hardly resolving the broader trade-related uncertainty that continues to cloud business sentiment in both countries,” said Eswar Prasad, a Cornell University economist who formerly led the China division at the International Monetary Fund.

Beijing has been reluctant to make the kind of substantive policy reforms that would satisfy the Trump administration. Doing so would likely require scaling back China’s aspirations for technological supremacy, which it sees as crucial to its prosperity.

The prolonged trade war has been inflicting economic damage. Factories have cut purchases and investments because they don’t know whether or when Trump will lift his tariffs or which countries he might target next.

The president’s sudden move Monday to take action against Argentina and Brazil underscored how unpredictable his policies are. Last year, he had agreed to exempt the two countries from tariffs on steel and aluminum. But he reversed that decision in a tweet Monday morning, accusing Argentina and Brazil of manipulating their currencies lower to give their exporters a price advantage. In fact, their currencies are plunging because their economies are in crisis.

On Tuesday, the Trump administration ratcheted up tensions with Europe by announcing plans to impose tariffs of up to 100% on cheese, Champagne and lipstick and other imports from France to protest a French digital services tax.

The administration is also readying taxes on $7.5 billion worth of European Union imports in a dispute over illegal EU subsidies to aircraft manufacturer Airbus.

The tariffs and the uncertainty they generate have hurt the U.S. manufacturing sector, which many economists say is already in recession. On Monday, a private survey found that American factory output had fallen for the fourth straight month.

At Misco Speakers, CEO Digre is postponing investments, trying to negotiate discounts with suppliers and hoping he won’t be forced to reduce his 100-person workforce. He’s planning a trip to the Philippines to find a supplier that isn’t subject to Trump’s China tariffs.

“The damage it does to a business is multiple,’’ Digre said. The tariffs are “a drain on your cashflow,” and “rather than spending the time developing new things, you’re trying to find someone else to make the same thing.’’