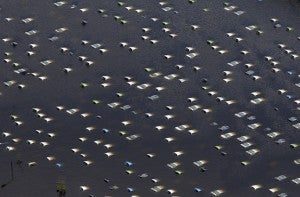 Vehicles at Honda auto factory are submerged in floodwaters at the Rojana industrial district in Ayutthaya, central Thailand in this October 16 file photo. AP

TOKYO—The manufacturing disruptions from the flooding in Thailand are continuing to take their toll on Japanese automakers.

Honda Motor Co. said Friday it is still unclear when its flooded Thai auto plant that has annual capacity of 240,000 vehicles can restart production. The automaker said production reductions will continue in Japan, North America and Europe, as well as Malaysia, the Philippines, Indonesia and Taiwan.

Company spokesman Tomohiro Okada said production in Vietnam, India and Pakistan, which is so far unaffected, would likely have to be reduced due to shortages of parts, although details were not yet decided.

Similarly, Toyota Motor Corp. said stoppages it had previously projected as lasting through Nov. 5 will continue through November 12, costing Japan’s top automaker 69,000 vehicles in lost production in Thailand, and 22,000 vehicles in Japan.

The automakers had already been battered by parts shortages caused by the March tsunami disaster in northeastern Japan when the latest problems emerged from the flooding in Thailand.

Thailand’s worst floods in more than half a century were caused by massive monsoon rains. Water began creeping into the country’s capital, Bangkok, last month. Experts have warned about possible health problems.

Honda, which suffered a 56 percent drop in July-September quarterly profit, has not given an earnings forecast for the fiscal year through March 2012, acknowledging that the Thai flooding made that too difficult.

Nissan’s profit has held up a better on strong sales in emerging markets. Toyota reports earnings next week.