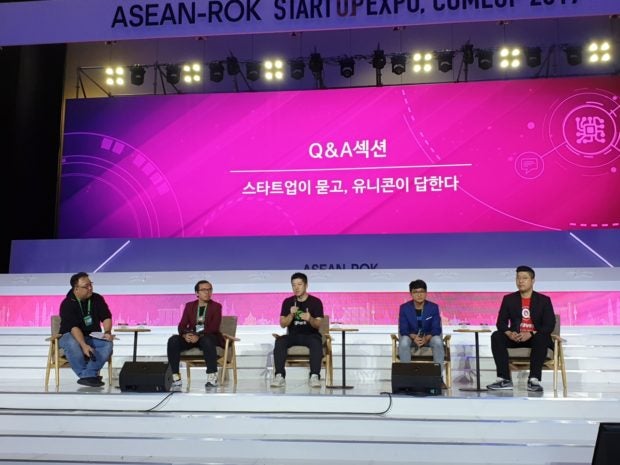 Unicorn & Startup Talk Concert, held Nov. 26 on the sidelines of the ASEAN-Republic of Korea Commemorative Summit. Kim Young-won/ The Investor

SEOUL — Southeast Asia-based startups emphasized the importance of being open to foreign talent during the Unicorn & Startup Talk Concert, held Nov. 26 on the sidelines of the Asean-Republic of Korea Commemorative Summit.

During the event, three representatives of Indonesian startups discussed the startup ecosystem in Southeast Asia, mainly Indonesia, along with the head of a Cambodian startup. Indonesia is home to four unicorns — startups whose value reaches over $1 billion. They are Gojek, Traveloka, Tokopedia and Bukalapak.

Participating in the discussion were Bukalapak CEO Fajrin Rasyid, Qraved CEO Steven Kim and Andrew Lee of Gojek, all from Indonesia, and Cambodian CEO Langda Chea of BookMeBus.

“If you don’t go global you cannot grow the right kind of muscles. Think about the Korean market, you can only jump so far,” Lee said during a Q&A session.

“Homogeneity will only get you so far,” Lee continued. “As you grow and become a better company, it will become easier to attract talent. But at the same time, you have to hear different insights and perspectives. And we’ve done quite well in that (in the Indonesian market).”

Qraved CEO Steven Kim, who shared his experience as a foreigner operating a business in Indonesia, concurred.

“I think Qraved is one of the children of the Indonesian governmental system. We benefited. We are one of the companies that were named as nexticorns, which indicates companies likely to become the next Indonesian unicorns. It’s interesting because I am a foreigner. I am Korean,” Kim said.

“Minister of ICT chose 44 companies as nexticorns and we went to Silicon Valley together to pitch Indonesian startups,” he added. This is something that you cannot often see in lots of countries and also shows that Indonesia can accept foreign knowledge, capital and talent.”

Kim also pointed to Korea’s strict regulations as a factor that deters foreign startup businesses from entering the country. “There is not a lot of red tapes (in Indonesia). Because the current administration’s mindset is more toward ‘do and fix or regulate it later,’ whereas in Korea there are lots of red tapes,” Kim added.

Kim also added that there was a similar problem in the financial and investment sectors. “Financial sector in Korea, the foreign investors are treated as a different force and not often considered as something to better nurture the ecosystem,” he said.