US meat producers want a slice of vegan market 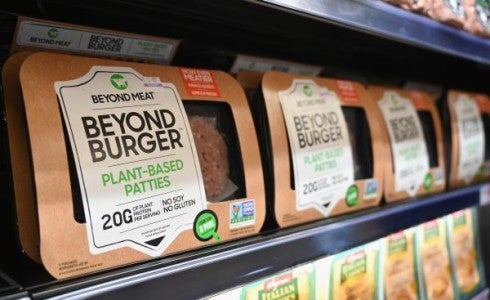 Beyond Meat “Beyond Burger” patties made from plant-based substitutes for meat products sit on a shelf for sale. Image: AFP/Angela Weiss

The growing craze for vegetarian versions of juicy burgers and sausages has created such a buzz that even traditional meat producers are trying to get in on the action.

The big players are trying to capitalize on the success of products from companies like Beyond Meat and Impossible Burger.

JBS, the world’s largest beef producer, has been marketing a soy burger in Brazil since the summer, which contains beets, garlic and onions and is similar to a rare ground beef.

And competitors Hormel Foods, Perdue Farms and Smithfield have unveiled similar initiatives to take a slice out of this new market.

There is an “increasing curiosity and motivation to try great-tasting, alternative protein sources like plant-based proteins while decreasing their consumption of animal-based protein.”

Regardless of whether it is the start of a new trend, or a passing fancy, the agri-food giants do not want to miss the opportunity. Rather than target vegetarians, they are going after the 95% of consumers who eat meat.

But unlike the upstart alternative meat companies, which cite the carbon footprint of raising cows and other livestock, traditional players have a harder time using environmental or animal rights arguments to promote their products. Instead, they often focus on health benefits.

“It’s more about our clients wanting to get more plants and vegetables into their diet and less about reducing meat consumption,” said Eric Christianson, marketing manager at Perdue.

Best known for its chicken, Perdue in September released their “Chicken Plus” products, which include kid-friendly nuggets, made of a mix of chicken, chickpeas and cauliflower — which they say is perfect for parents trying to get their kids to eat vegetables.

The company is betting big on this new product: earmarking half of its 2020 marketing budget to promoting it, spending especially heavily in January, “when people are really going to be in the mood to eat healthy,” Christianson said.

Soy burgers have been around for decades. But Beyond Meat and Impossible Burger have been working for the last 10 years to create products that are closer to the taste, texture and flavor of real meat, thanks to ingredients such as beets.

These products jumped into the headlines this year with their introduction in fast-food chains, such as Burger King’s Impossible Burger, and with Beyond Meat’s spectacular Wall Street debut.

Traditional meat producers quickly jumped on the bandwagon. At Hormel, the Happy Little Plants brand “moved swiftly from a conceptual idea rooted in the ‘plant curious’ consumer… to a commercially viable product line in just under 13 weeks,” Kreske said.

But while these meat producers have no plans to abandon their main business, Impossible Foods says its mission is to replace animal proteins in the food system by 2035.

That might be overly optimistic. In the market for milk alternatives, plant-based drinks such as soy or almond milk make up just 13% of sales.

But for meat, “it becomes more of a lifestyle choice to eat healthier.”

Still, the alternative meat segment could become “significant,” he said.

Robert Martin, who specializes in food policies at the Center for a Livable Future at Johns Hopkins University, said the traditional producers are entering the plant-based meat market “in their own economic self-interest,” so they do not lose market share.

He called the trend “troubling” and cautioned “it could have the side effect of stifling innovation and competition.”

Even so, he views any plant-based alternative as “a positive step,” adding that bigger players can bring “economies of scale” to producing these plant-based products, therefore reducing prices.

“They quit talking about themselves as meat companies, they now call themselves a protein company,” Martin said. IB/JB

World Vegan Month: How going vegan could boost your health