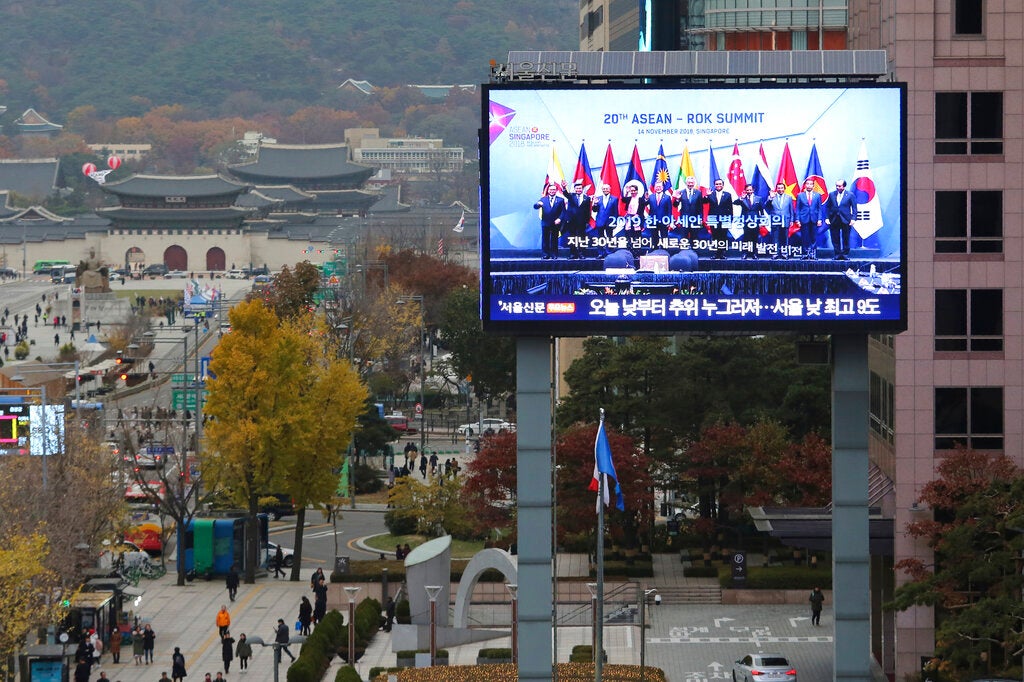 SEOUL — South Korea is building stronger ties with the young and fast-growing economies of Southeast Asia in hopes of creating opportunities and seeking a breakthrough in a world facing new challenges amid the “fourth industrial revolution.”

The Association of Southeast Asian Nations is emerging as a new growth engine of global consumer markets and production bases with enormous potential. The world’s youngest and most dynamic economic community has a combined population of 650 million and a combined gross domestic product of $2.9 trillion.

Paying attention to the potential of the region, the Moon Jae-in administration launched the New Southern Policy in 2017 as its key foreign economic policy. Over the past three years, President Moon has visited all 10 Asean members — Indonesia, the Philippines, Vietnam, Singapore, Malaysia, Cambodia, Brunei, Thailand, Myanmar and Laos — to lay the foundation for deepening cooperation with the countries.

“Asean is the world’s youngest and most dynamic economic community. To transform its infinite potential into sustainable prosperity, it is crucial to increase connectivity in the region and cooperate in high-tech industries,” President Moon Jae-in said in an article he contributed to The Korea Herald last week.

“If we enhance cooperation in transport infrastructure, smart cities and advanced science and technology — Korea’s strengths — we could jointly nurture innovative capabilities to respond to the Fourth Industrial Revolution.”

He went on to say, “Using free trade to expand commerce, fostering small and medium-sized enterprises for an inclusive economy, and promoting green growth, such as an eco-friendly bio-industry — these are also areas where Korea and Aseancan work together.”

Since Asean and Korea established diplomatic relations in 1989, the two sides have grown to become key economic partners and their trade volume has steadily increased.

Asean is South Korea’s second-largest trade partner, and Korea was Asean’s fifth-largest trade partner last year. Also, Southeast Asia is Korea’s third-largest investment destination, as the number of Korean companies advancing into the region has continued to rise. The number of Korean companies setting up business in the bloc stood at 1,292 last year, up from 850 in 2014, according to the Trade Ministry.

Korean tech titan Samsung Electronics has operated the biggest mobile phone factory in Hanoi, Vietnam, since 2009, producing most of the smartphone products that Vietnam exports worldwide.

Another Korean tech giant, LG Electronics, makes television screens in a $1.5 billion factory in the port city of Haiphong, Vietnam. The region has also served as a global production hub for TVs, mobile phones, washing machines and air conditioners.

Automakers are now eyeing Indonesia as one of the largest auto markets in the region, with the world’s fourth-largest population and annual economic growth of more than 5 percent.

In June, Hyundai Motor signed an agreement with Singapore’s major land transport company ComfortDelGro to provide 2,000 Ioniq Hybrid vehicles by 2020, expanding its eco-friendly car models in the nation in cooperation with taxi and car-sharing companies.

As for Korea’s largest steelmaker, Posco has production plants in Indonesia, Vietnam and Myanmar.

AFP warns Facebook: ‘Enemies of the state’ using you