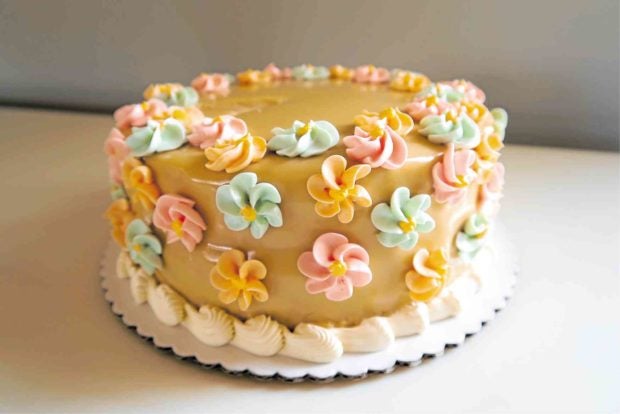 To this day, Estrel’s uses the same recipe that was used by Estrella Ylagan herself in the 1940s.—MARGAUX SALCEDO

Christmas is just around the corner and that means parties, reunions, celebrations and gatherings. Now comes the annual challenge of what to bring to the annual potluck; or what to give to the gracious host.

Aside from the ubiquitous bottle of wine, another go-to is cake.

Sometimes you can tell where a person is from with the cake they bring. Guys from the south bring Conti’s, or at least that was the go-to before they branched out; those from Manila bring either the Swiss Chocolate or Prune Walnut cake from Becky’s Kitchen; Makati residents patronize Costa Brava, picked up from Bel-Air; and you know someone’s from Quezon City if he or she comes with a cake from Estrel’s.

Estrel’s made-to-order chiffon cake is especially iconic. The minute that you see a glistening caramel-colored cake with an icing design of dainty pastel roses on top and intricate ivory lace around, you know it’s Estrel’s.

Estrella Ylagan created this caramel cake, with her signature broken line icing design – a stroke that no less than the Wilton School of Cake Decorating and Confectionery Art confirmed originated in the Philippines – in 1946, first as a hobbyist making cakes out of her own home in Lepanto Street in Manila, then later selling these in her first shop in Azcarraga, Manila.

Their website shares the story of their humble beginnings: “For over 50 years, Estrella’s operated on the second floor of Laperal Building (still surviving) on Recto. For 50 years, too, customers didn’t mind climbing four flights of stairs into the open decorating area of the kitchen to pick up their cakes—or to place their repeat orders.”

Gina Gracia Navarro, Ylagan’s niece who now runs Estrel’s with her sisters Gilda Joy and Mia Fatima, shares that her Tita Estrel was the cousin of Maria Orosa, the humanitarian and war hero who, aside from secretly being a captain in the guerrilla movement against the invading Japanese forces in World War II, also invented the palayok oven to enable families without access to electricity to bake. Being a home economist in the Bureau of Plant Ministry which Maria Orosa headed, Tita Estrel started making her caramel cakes using the palayok oven that Orosa invented.

To this day, Navarro confirms, Estrel’s uses the same recipe that was used by Estrella Ylagan herself in the 1940s. That explains why customers remain loyal and even become nostalgic. Navarro shares how some lolos and lolas come to the shop and say that this was the cake they had at their debut or wedding or other special occasions way back in the 1940s or 50s.

In her office, she also keeps the original bowl that her aunt used to make the butter cream for the cakes, using only a wooden spoon.

All the baking for Estrel’s cakes are done by hand although mixers are now used just for the butter icing. Everything is made from scratch and only six hours before the time of the customer’s pickup to ensure freshness. They do not use any preservatives so customers are warned to consume the cakes immediately (although, the warning should be to not consume the cakes immediately because everyone’s always excited to devour this cake).

In the 1980s, the shop moved from Azcarraga to its present location in Quezon City. It has always been a place for pickups and they did not accept walk-ins, differentiating Estrel’s from the ordinary bakeshop.

However, after seeing how heartbroken some customers would become once told that cakes were only by order, some of whom would even come all the way from Alabang just to get a cake, they finally caved and now set aside at least a hundred 8-inch caramel cakes for walk-ins. These are sold out daily in spite of the fact that they do not advertise.

Today, they have expanded their product list to include food for the gods, baked leche flan and chocolate chip walnut cookies. They also make a heavenly sans rival.

Of course, nothing beats the original caramel cake. After 73 years, it’s still the best!