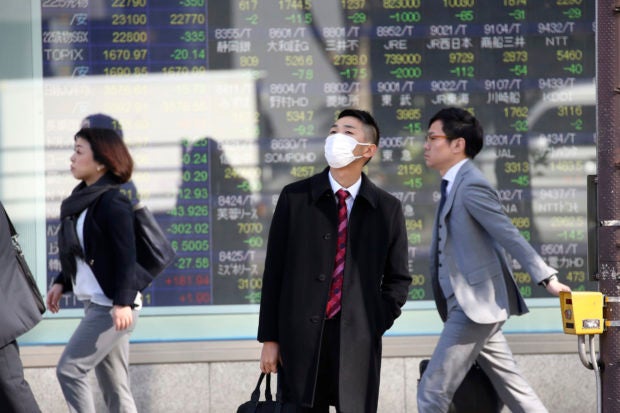 In this Thursday, Nov. 21, 2019, photo, people walk in front of an electronic stock board of a securities firm in Tokyo. Stocks logged modest gains Friday, Nov. 22, 2019, in Asia after a lackluster overnight session on Wall Street ended with the market’s third straight drop. (AP Photo/Koji Sasahara)

Xi told a visiting delegation in Beijing on Friday that he hoped to work toward a resolution of the 18-month-old tariff dispute with Washington. He added, though, that China was not “afraid” and would “fight back” if necessary.

Investors turned cautious this week amid concerns that the U.S. and China will fail to strike a deal before the year is over.

The world’s two largest economies have been negotiating a resolution to their trade war ahead of new tariffs set to hit key consumer goods on Dec. 15. Investors have been hoping for a deal before that happens, as the tariffs would increase prices on smartphones, laptops and many common household goods, just before Christmas.

Meeting with a U.S. delegation from Bloomberg’s New Economy Forum, a conference held in Beijing this week, Xi said “We want to work for a Phase 1 agreement on the basis of mutual respect and equality.”

The Wall Street Journal reported that China’s lead negotiator in the talks, Vice Premier Liu He, has invited his U.S. counterparts to Beijing for more talks. That also swayed markets in a positive direction.

The uncertainty over the trade dispute between the two largest economies, “has investors sitting in that all too familiar predicament of trade war limbo,” Stephen Innes of AxiTrader said in a commentary.

“It does sound positive on the surface, but equity markets remain cautious given the numerous stops and starts, not to mention dead ends these trade discussions have met with,” he said.