TOKYO – Shares advanced in early European trading Tuesday after a mixed session in Asia as investors awaited fresh developments in trade talks between the United States and China. 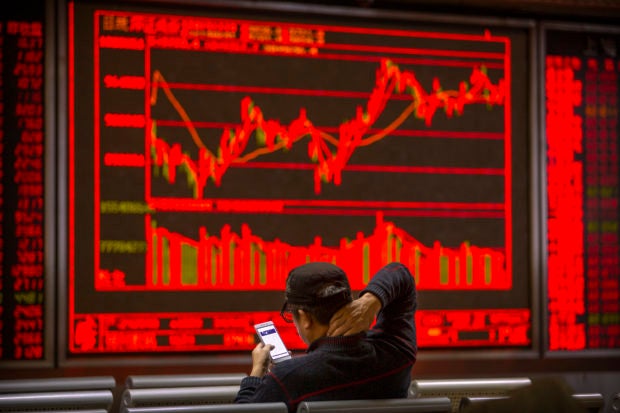 A Chinese investor uses his smartphone as he monitors stock prices at a brokerage house in Beijing, Tuesday, Nov. 19, 2019. Asian shares were mixed Tuesday as investor sentiment remained cautious amid worries about the next development in trade talks between the United States and China. (AP Photo/Mark Schiefelbein)

Chinese indexes rose as political protests in Hong Kong quieted somewhat, with police tightening a blockade at Hong Kong Polytechnic University. Hundreds of demonstrators who left the campus after a violent weekend were arrested.

But the on-again, off-again negotiations between Beijing and Washington over their trade dispute remain a wild card for the markets.

“Risk sentiment can be seen little changed amid the conflicting reports on US-China trade as we remain in a very headline driven reality,” said Jingyi Pan, market strategist at IG in Singapore.

President Donald Trump earlier ordered that U.S. manufacturers stop supplying key components to Huawei on the grounds that it is a security risk. But the government has not shown evidence of that, and many American companies have sought exclusions to the rule for the sake of their own businesses.

Markets seemed to react with calm to news that Trump summoned Federal Reserve Chairman Jerome Powell to the White House on Monday to discuss the economy and interest rates — issues where the president has repeatedly attacked the Fed.

Trump tweeted Monday that his meeting with Powell was “very good and cordial.” He added that they discussed “interest rates, negative interest, low inflation, easing, Dollar strength and its effect on manufacturing, trade with China, E.U. and others, etc.”

The Fed said in a statement that Powell’s message to Trump during their meeting was similar to the one he expressed in congressional testimony last week, when he said that the economy is in good shape and that the Fed would likely suspend its rate cuts for now. The central bank has cut its benchmark short-term rate three times this year to try to support the economy.

ENERGY: Benchmark oil fell 2 cents to $57.03 a barrel in electronic trading on the New York Mercantile Exchange. It fell 67 cents to $57.05 a barrel Monday. Brent crude, the international standard, picked up 2 cents to $62.46 a barrel.

Your subscription could not be saved. Please try again.
Your subscription has been successful.
Read Next
PH dollar reserve piling up as BOP records surplus of $163M
EDITORS' PICK
12-year data track poor training of PH teachers
CBCP releases litany of thanks for better health
Smart launches first joint Telco TVC for Donbelle
US gets access to more PH bases
House energy committee chair Arroyo bats for cheap electricity
Omega Speedmaster super racing: Tiny device massive change
MOST READ
Sandara Park ‘got in trouble’ for not pressing elevator button for a company head
Republicans oust Ilhan Omar from high-profile US House committee
US gets access to more PH bases
Bullet found in Kian’s neck after 5 years, 2 autopsies
Don't miss out on the latest news and information.