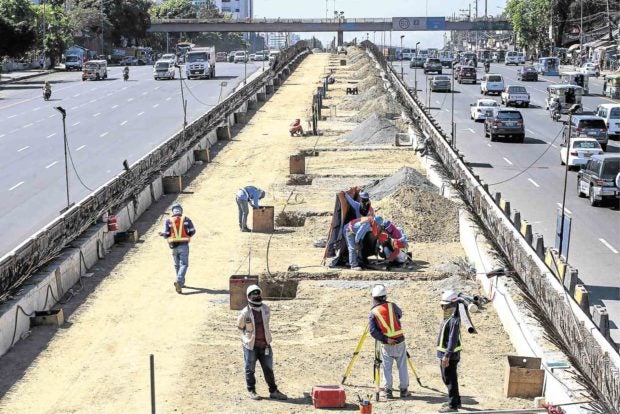 Even under the scorching heat of the sun, workers continue to build the MRT 7. —JAM STA. ROSA

MANILA, Philippines–The new “Build, Build, Build” list comprised of 100 big-ticket infrastructure projects got a boost from the inclusion of at least 15 unsolicited projects pitched by tycoons and the private sector who wanted to take advantage of flushing domestic liquidity and the Duterte administration’s openness to volunteered projects amid improved regulations.

The unsolicited public-private partnership (PPP) projects in the transport and mobility sector amounted a combined P1.39 trillion or nearly a third of the total project cost of the 100 “flagship” projects worth at least P4.3 trillion.

The flurry of unsolicited projects was unlike during the previous Benigno Aquino III administration, during which the government solicited private participation for the PPPs in its pipeline.

The PPP Center’s website showed that there were 19 PPP projects currently under implementation, of which 15 projects worth a combined P242.8 billion had been solicited, and the bulk of them rolled out by the previous administration.

Four other PPP projects being implemented at present amounted to a bigger P821.6 billion, bringing the total project cost of PPP projects currently under implementation to P1.06 trillion.

Unsolicited PPP proposals needed to undergo Swiss challenge, under which other companies can bid for the project, and then the original proponent that submitted the unsolicited proposal will be allowed to match or submit a better bid before the project is awarded.

In 2018, the PPP Center’s governing board issued a resolution guiding the management of unsolicited proposals to address problems encountered in the past, such as absence of proposed minimum performance specifications and standards, contracts lacking provisions required by law, incomplete feasibility studies, lack of clarity on the roles of agencies, and lack of clarity on what constitutes government undertakings, among other issues.

Socioeconomic Planning Secretary and National Economic and Development Authority (Neda) chief Ernesto M. Pernia earlier told the Inquirer that the government will appraise unsolicited PPP projects “in accord with the overall infrastructure plan, appropriateness and feasibility.”

Presidential adviser for flagship programs and projects Vivencio B. Dizon, for his part, had said the new “Build, Build, Build” pipeline was a “testament that the government is not against PPPs as long as contacts are advantageous to the government.”