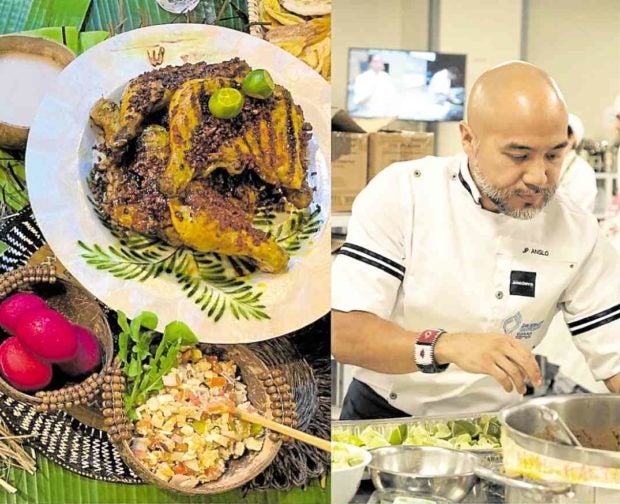 They are chefs JP Anglo of Sarsa Kitchen and Sau del Rosario of Cafe Fleur, who both gave well-received presentations last October at the prestigious Gastronomika whose stage has been honored by top world chefs from the Roca brothers to Massimo Bottura to Elena Arzak to pretty much every chef whom chefs worship.

This was an extra special year, too, as Spain’s Gastronomika celebrated the 500th anniversary of the successful circumnavigation of the world by Basque native Juan Sebastian Elkano, the navigator in Ferdinand Magellan’s historic expedition.

Anglo did an exemplary job introducing Negrense cuisine to the world.

Anglo presented a boodle fight and demonstrated how to cook chicken inasal and binakol. He gave a video presentation on how food is cooked and appreciated in Siargao, which he called his sanctuary, and showed how food is enjoyed right by the beach, with everyone eating with their hands.

He highlighted the Philippine coconut and recalled how this was valued as far back as the Galleon Trade. He noted this was “an important and abundant ingredient” in Philippine cuisine, being the source of vinegar, cream, juice, marinade, salsa and many dishes.

He demonstrated how to use coconut water in making binakol. He showed how to make latik. He then made the audience smell coconut sap vinegar, noting it was not as pungent and in fact more fragrant and less acidic than other vinegars.

He also demonstrated how to cook inasal, adding niyog or grated coconut meat to the chicken before wrapping it in a banana leaf. “This is a grilled chicken dish from the Visayas,” he explained. “It is heavily marinated in coconut vinegar. Inasal —from inasar or asar—roast in Spanish—[is] a young coconut vinegar grilled chicken dish, traditionally flavored by cane vinegar brought by Spaniards and anato oil brought by Mexico.”

Anglo submitted the thesis, too, that Philippine cuisine continued to evolve—that chefs of today need to also think out of the box and get out of their comfort zone to evolve.

A fun and important part was when he presented his boodle fight and invited some members of the audience to partake of the food using their bare hands “because this is how we do it.”

Meanwhile, Chef Sau highlighted Philippine cacao, introduced to the Philippines from Mexico through the Galleon Trade.

The presentation of cacao was quite unique.

Del Rosario brought cacao vinegar that he fermented for three months using the flesh of the seeds. He noted that as it aged, it developed a sherry flavor and a little chocolate note toward the end.

He then demonstrated sisig using the cacao vinegar, serving it inside a cacao pod. As usual, sisig was a hit and many chefs asked for the recipe after his presentation.

Bravo to these two chefs who have proven once again that Philippine chefs and ingredients are truly world class!