Bank on steroids: Once lanky UnionBank builds up digital muscles 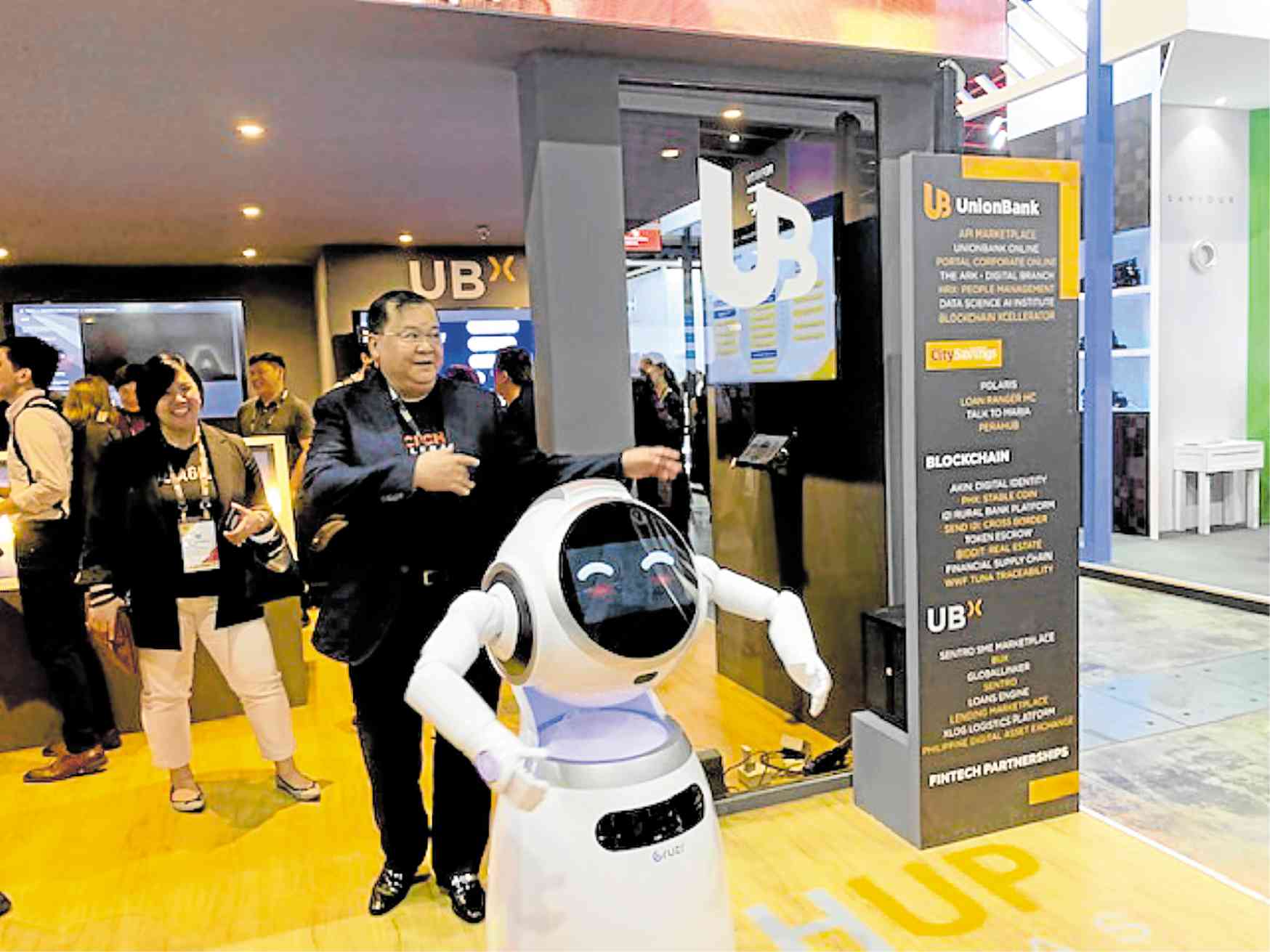 Unionbank president Edwin Bautista dancing with Eve, a crowd favorite at the summit—PHOTOS BY DORIS DUMLAO-ABADILLA

SINGAPORE—IT’S sort of a “coming out” party for Aboitiz-led Union Bank of the Philippines, says president Edwin Bautista, describing the Philippine bank’s prominent positioning this year at the Singapore Fintech Festival, the world’s largest fintech summit.

Unionbank, a traditional financial institution since inception in 1968, now identifies itself as a “technology company, also a bank” and is proudly telling the whole world about it. When people now look for the most tech-savvy and innovative bank in the Philippines, Unionbank is top of mind.

The transformation started only four years ago, and the mandate came from the top. Justo Ortiz, bank chair, is a passionate evangelist of digitalization. Outside of Unionbank, he chairs the Fintech Philippines Association, the Blockchain Association of the Philippines, and is a cofounder and chair of Tech Up Pilipinas, a movement pushing for inclusive prosperity by helping small- and medium-sized enterprises (SMEs), individuals and corporates benefit from technology.

Ortiz believes in preparing Unionbank for a future where customers would want to interact with the bank using their preferred interface, thus requiring something like “open banking on steroids.” It’s the future, but it’s a comeback of an economic system where people from the ground can reclaim power to demand for the right solutions.

Enterprises will have to be “deconstructed” because specific functions—such as those relating to human resources, enterprise resource management, customer relationship management or logistics supply chain—will be served by external platforms at a much lower cost.

With fintech firms disrupting so many traditional segments of banking—lending and payments being the most notable—Unionbank believes it must future-proof itself by evolving into a trusted curator of sellers and service providers that consumers and enterprises can choose from. These will be serviced by artificial intelligence, envisioned to be a “super app.”

This is also in line with the overarching goal of financial inclusion. Unionbank’s “moonshot” goal is to touch 50 million people through various channels.

In late 2018, Unionbank incorporated its own fintech/innovation arm UBX Philippines Corp. to explore new business models outside traditional banking. UBX has since then embarked on around nine new initiatives using blockchain or distributed ledger, including i2i, which links rural banks to the mainstream financial pipeline.  Using the same platform, Unionbank has teamed up with OCBC to create a blockchain-powered new remittance channel between the Philippines and Singapore.

Through GlobalLinker, UBX has created a community for SMEs, providing access to services and marketplaces to help these SMEs “tech up.” UBX has also debuted in the logistics space by investing in Shiptek Solutions Corp., developer of shipping and logistics platform X-Log. 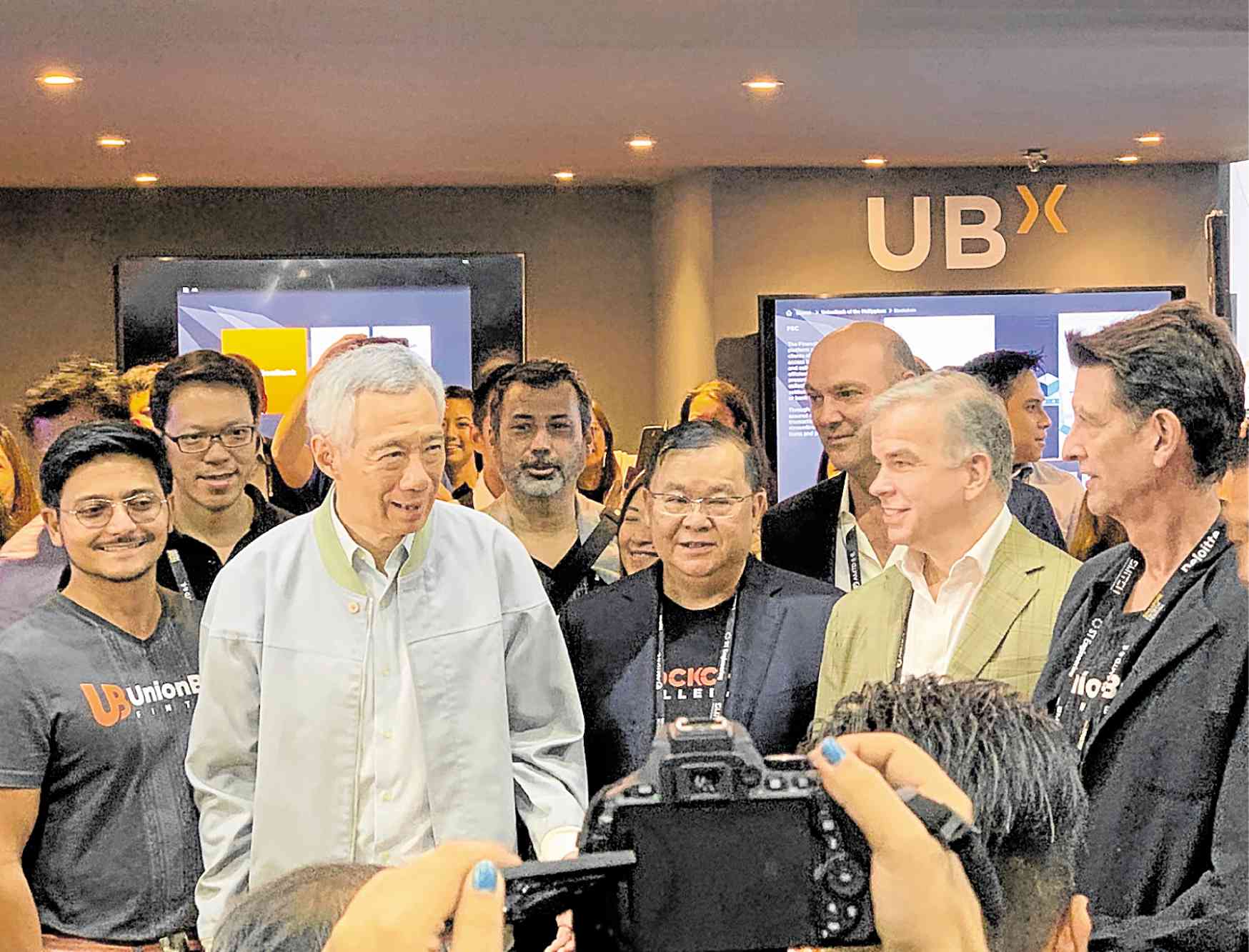 Led by its CEO John Januszczak, UBX also showcased a number of its new initiatives. There’s Sentro, a B2B marketplace with a built-in e-store builder and payment platform, where small businesses can find various tools, systems and solutions to run and digitize their business. Bux, on the other hand, is an end-to-end e-commerce payment system and fulfillment platform that allows customers to accept all forms of payment from any online store or site run by the customer.

On the sidelines of the fintech summit here, UBX also finalized its partnership with One Connect Financial Technology Co. Ltd., an associate of Ping An Insurance (Group) of China to create a lending marketplace for micro, small and medium enterprises (MSMEs). The new lending platform SeekCap matches accredited lenders, spearheaded by parent bank Unionbank, with MSMEs. Loans can be approved on the same day.

Within the parent bank, Unionbank has created its own fintech business group, actively seeking collaboration with fintech firms. This is likewise in support of its goal to be the “Netflix of APIs (application programming interface).”  It now has the largest API developer portal among Philippine banks with over 500 APIs.

APIs refer to the bank’s various capabilities like bills payment, funds transfer, inquiries, authentication and other functions. The API Developer Portal is the interface between Unionbank’s full suite of APIs and their various developer stakeholders, particularly fintechs who have been screened to plug and play with the bank. In the last three years, the bank’s expanding API portal has generated P3 billion worth of transactions from both corporate and retail customers.

With its exposure at the Singapore Fintech Festival, among other initiatives, Unionbank hopes to stay at the top of the game. That means remaining on the lookout for new technologies and prospective partners.

“If we’re looking for complementary capabilities or potential partners, this is a great place to source it,” Januszczak adds.

During the fintech festival here, Ortiz and Bautista were among those who manned the booth, along with Eve, the bank’s robot-employee programmed to learn certain functions in branches.

If it was a coming out party, Unionbank indeed pulled out all the stops. It was one of just a handful of booths (perhaps the only non-Singaporean entity) at the fintech festival that was visited by Singapore Prime Minister Lee Hsien Loong and Ravi Menon, Monetary Authority of Singapore managing director, on Tuesday afternoon. On Wednesday, Bangko Sentral ng Pilipinas Governor Benjamin Diokno also graced the booth for about an hour.

So how is Unionbank reimagining the future? Ortiz says it will be “giving our customers, individuals, SMEs and enterprises development tools so they can choose their own interaction with the bank through the different marketplaces that they want to access, whether it’s lending, savings investment or even other marketplaces, because we are also building verticals like logistics supply chain platform—which we have already built through XLOG—and we’re also looking at other verticals like health care, education, etc.”

He says the bank will become a “trusted curator, to vet these marketplaces to make sure that our customers access them and get the kind of promise and kind of customer experience that they demand.”

“Some people ask, why are you helping to accelerate disruption? But we’re being disrupted anyway!” Bautista says.