NEW YORK – The Dow Jones Industrial Average returned to a record on Monday, joining other market gauges at all-time highs, as the stock market’s rally carried into a fifth week. 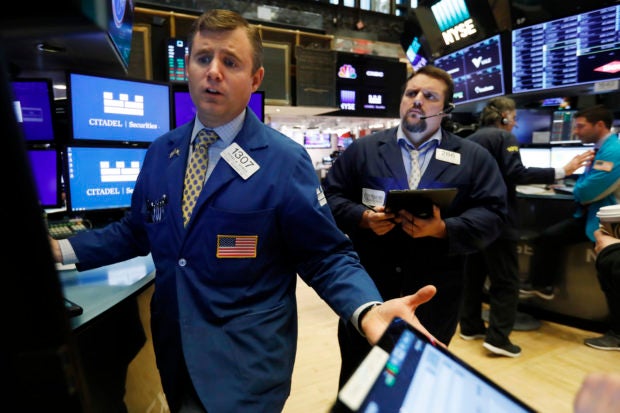 Oil producers, banks and other stocks that do well when the economy is strengthening again led the way. It’s a notable shift in leadership following months of struggles for what Wall Street calls “cyclical” stocks, which lagged due to worries about trade wars and the slowing global economy.

Behind the resurgence for cyclicals are rising hopes that the United States and China are making progress in negotiations on their trade dispute, or at least that they’re no longer making it worse. Reports last week also showed that the job market is continuing to grow, corporate profits aren’t doing as badly as Wall Street expected and interest rates will likely remain low for a while.

Even in manufacturing, which has been hit particularly hard by President Donald Trump’s trade war, investors saw some hopes that things may be hitting bottom soon.

“Investors are doing what we’re theoretically supposed to be doing: We’re looking out at the next 12 to 18 months and investing on the basis of where it’s going, not on where we’re at today,” said Tom Stringfellow, chief investment officer at Frost Investment Advisors.

“We are investing on expectations that whatever the worst is, we’re there now.”

Of course, all that optimism could wash away quickly if U.S.-China trade talks take yet another turn for the worse, Stringfellow said. But investors likely need to see only incremental improvements, rather than comprehensive deals, to keep the momentum going, he said.

Rising optimism in the market was evident not only in U.S. stock indexes but also in higher yields for Treasurys. When investors feel less need for safety, the crowd thins to buy Treasury bonds. And when prices fall for Treasurys, their yields rise.

The yield on the 10-year Treasury climbed to 1.77% from 1.72% late Friday. Not only that, the gap between the yields of the 10-year and two-year Treasurys widened, which many on Wall Street see as a sign of increased confidence in the economy.

Such a widening spread helps banks, which make money by borrowing money at short-term rates and lending it out at longer-term rates.

Other cyclical sectors, such as energy and industrials, were also ahead of the pack.

A stronger global economy would mean more demand for energy, and benchmark U.S. crude rose 34 cents to $56.54 per barrel. Brent crude, the international standard, rose 44 cents to $62.13 a barrel.

Defensive stocks, meanwhile, lagged. Utilities fell 1.3% for the largest loss in the S&P 500, and real-estate stocks were down 1.1%.

It’s a reprieve for cyclicals, which have been becoming a smaller part of the stock market. Investors instead have focused on defensive stocks that can do well even when the economy is turning sour or on companies that can grow almost regardless of the economy, such as Amazon.com, Apple and other big technology companies.

Cyclical companies recently made up about 34% of the S&P 500, down from 41% in early 2018, according to James Paulsen, chief investment strategist at the Leuthold Group.

Part of the reason for the shift into cyclical stocks may simply be the calendar. It’s what typically happens late in the year, said Sam Stovall, chief investment strategist at CFRA.

But the shift doesn’t necessarily mean the all-clear for the economy and the market. Barry Bannister, head of institutional equity strategy at Stifel, sees cyclical stocks doing better than defensive stocks into the middle of 2020, but he sees the S&P 500 falling back to 3,050 by the end of the year and rising modestly to 3,100 in 2020.

Monday’s biggest loss in the S&P 500 came from Under Armour, which said it has been cooperating with federal regulators for two years on an investigation into its accounting practices. Its Class A shares plunged 18.9%.

Read Next
No more monetary easing this year
EDITORS' PICK
Print media group seeks tax breaks
Climate Change Commission and Nestlé PH to discover sustainability-focused solutions
Legarda emphasizes role of ICC/IPs in nation building this IP month
SC asked to compel gov’t action vs plastic pollution
PH study shows 1 in 4 COVID patients at risk for stroke
Work-From-Home is here to stay and requires reliable logistics
MOST READ
Drivers now required to take driver’s education upon license renewal – LTO
Gordon to Duterte: You? Teaching me courtesy?
Can Marcos Jr. be disqualified?
Marcos Jr’s ‘special diploma’ from Oxford: You can have it, too
Don't miss out on the latest news and information.