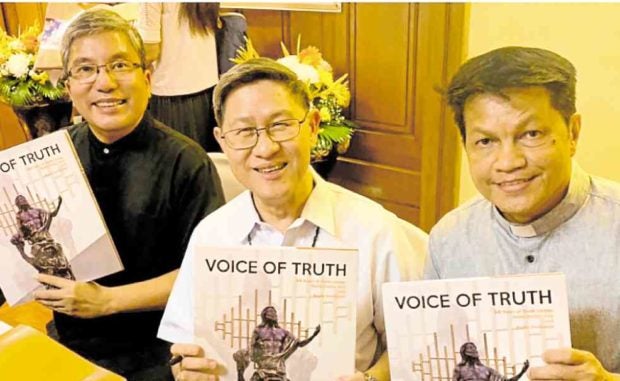 The very religious chef Jessie Sincioco last Tuesday hosted a thanksgiving feast for papal awardees as part of the 50-year anniversary celebrations of Radio Veritas at the Arzobispado de Manila.

At the thanksgiving lunch, Radio Veritas presented its project concept for the 500th anniversary of Christianity in the Philippines entitled “Far East Pilgrim: 500 Years of Catholic Faith.”

This will be a five-part docu-drama with a 100-minute theatrical version on the history of Christianity in the Philippines, in partnership with the History Channel.

Chef Jessie’s menu that started with Caprese salad with artichoke heart reminded me of our late editor in chief Letty Magsanoc, who loved her restaurant.

And after viewing the teaser of the project concept, it also occurred to me that given the depth of research and the delicate yet powerful treatment required, it is something that only someone like Kara Magsanoc Alikpala, who did the documentary Batas Militar and the recent international award-winning documentary Call Her Ganda, as well as other documentaries for the History Channel, can properly execute.

It is a promising project for which Radio Veritas is now raising funds. Aside from the documentary, there will also be a theater caravan reenacting the milestones of Catholicism in the Philippines.

Earlier that day, Radio Veritas also launched Voice of Truth, a coffee table book celebrating the 50 years of Radio Veritas. It’s a beautiful book showing photos of the role that Radio Veritas played in the country’s history, especially during the Edsa Revolution and the visits of Pope Paul VI, Pope John Paul II, and Mother Teresa— now all saints—to the radio station. To purchase the book, you may also contact Bro. Clifford.

As for chef Jessie, she recently launched The Bakery at Chef Jessie’s Place, her building with a chapel and two event halls, on Pililia Street (just off J.P. Rizal) in Makati.

Here, chef Jessie brings back the mango cake that made her win the The Great Maya Cookfest in 1983 and pivoted her career to the culinary arts. It is now called My Tita’s Special Delight at the bakery.

Another addition is Teddy Keng’s chocolate gateau, a decadent moist chocolate cake enveloped in a beautiful chocolate ganache. (Mr. Teddy Keng is the very humble founder of Landmark Makati who makes sure there is a Landmark Chapel in each department store building.) It is available daily at Chef Jessie’s Place.

There are also several local breads available—pan de sal and several varieties with palaman, little ensaimada balls and other baked goods stuffed with peanut butter, ube and of course, chef Jessie’s famous ciabatta. The olive oil and bell pepper dip that has become the signature of her restaurants is now also available at The Bakery by the bottle.

After this weekend, we will now go full-on mode for Christmas and these cakes, breads and dips would make for perfect Christmas gifts.

Of course, as an alternative to Christmas shopping, you can also give the gift of giving and donate to Radio Veritas for their 500 Years of Christianity project or purchase the Voice of Truth book.

Bro. Clifford will be waiting for your call—and your purchase or pledge. That would also be a good gift as there will be no calories involved, only blessings!