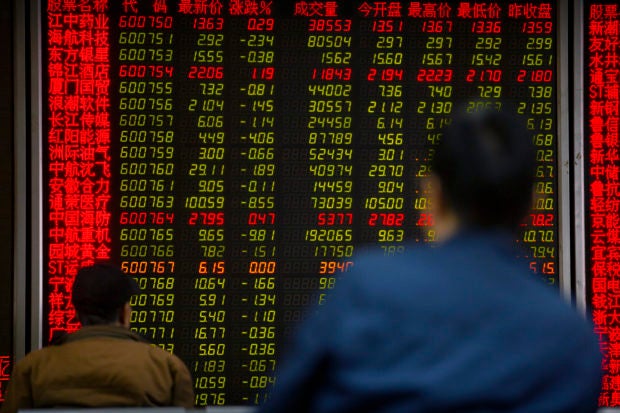 The modest pullback came a day after the S&P 500 hit an all-time high. Reports that China and the U.S. may not reach a trade agreement in time to sign a deal next month at a regional summit put a damper on sentiment.

Investors were cautious ahead of a policy announcement later Wednesday by the Federal Reserve, which is expected to cut interest rates again.

“Asia markets can be seen going into the … session with a mixed tone, waiting with bated breath for the Fed release amid the lack of releases in the Asia session,” Jingyi Pan of IG said in a commentary.

Overnight, a wobbly day of trading ended with modest losses in New York.

Health care stocks jumped on stronger-than-expected reports from drugmakers, but losses by internet and media companies held the market in check.

Hopes that the U.S. and China can make progress on their trade dispute, or at least stop making it worse have recently buoyed share prices.

White House spokesman Judd Deere told reporters Tuesday that both sides were working to finalize a deal, aiming for a signing by President Donald Trump and China’s leader Xi Jinping next month at a Pacific Rim summit in Chile.

But various officials have indicated an agreement might not be ready in time.

Most investors expect the Federal Reserve to cut short-term rates by a quarter of a percentage point on Wednesday. It has cut rates twice since the summer to shield the U.S. from the impact of the trade war and a slowing global economy.

Company earnings reports have also helped lift the market. With nearly half of the companies in the S&P 500 having reported results for the July-September quarter, the index is on pace to report a profit drop of 3.5% from the prior year, according to FactSet.

That’s not as bad as the roughly 4% decline that analysts were expecting on the eve of earnings reporting season, but it would be the first time that profits dropped for three straight quarters since 2015-2016.

Analysts say the sharpest earnings declines in the third quarter will come from energy companies, raw-material producers and technology companies. Wall Street is expecting stronger growth, meanwhile, from companies that do most of their business domestically, such as utilities and real-estate companies.

Over the long term, stock prices tend to track the path of corporate profits.

Benchmark crude oil fell 27 cents to $55.28 per barrel in electronic trading on the New York Mercantile Exchange. It gave up 27 cents to settle at $55.54 a barrel on Tuesday.