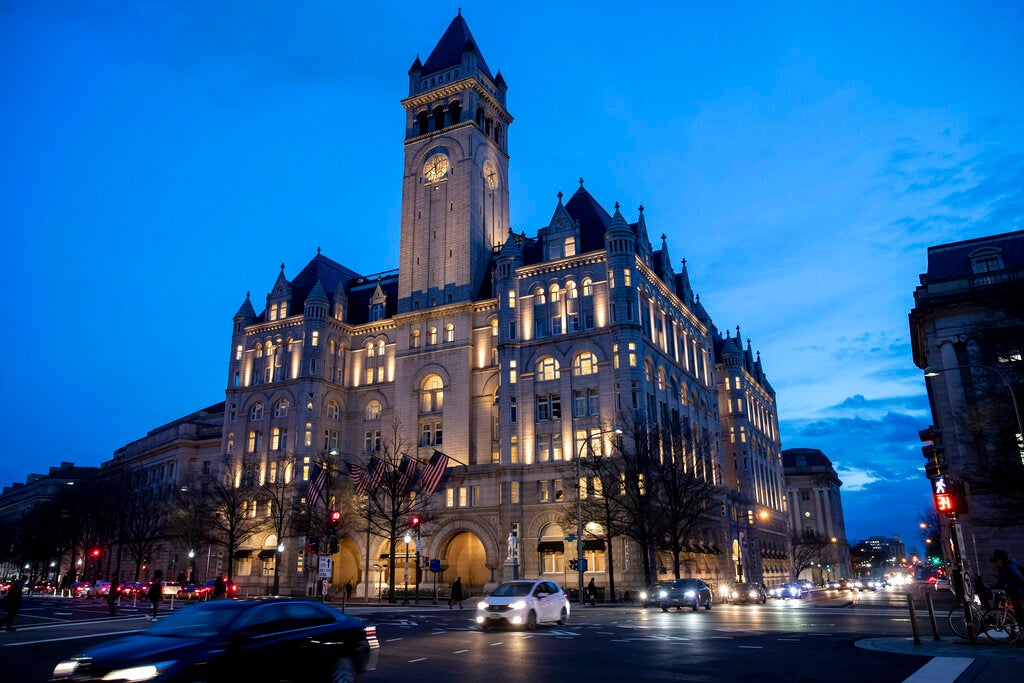 The Trump International Hotel near sunset in Washington (AP)

WASHINGTON — President Donald Trump’s company said Friday it is exploring the sale of its landmark Washington hotel after nearly three years of ethics complaints and lawsuits accusing him of trying to profit off the presidency.

The Trump Organization says it will consider offers to buy out the 60-year lease on the Trump International Hotel, which since opening in late 2016 has become a magnet for lobbyists and diplomats looking to gain favor with the administration.

“People are objecting to us making so much money on the hotel and therefore we may be willing to sell,” said Eric Trump, an executive vice president of the Trump Organization. “Since we opened our doors, we have received tremendous interest in this hotel and as real-estate developers, we are always willing to explore our options.”

The opulent, 263-room hotel built in the Old Post Office down the street from the White House has hosted parties thrown by diplomats from the Philippines, Kuwait and other countries, and has been among Trump’s biggest money makers. It is at the center of two lawsuits accusing the president of violating the emoluments clause of the U.S. Constitution, which bars presidents from receiving gifts or payments from foreign governments.

According to Trump’s most recent financial disclosure, the hotel took in $41 million in revenue last year, up less than half a million dollars from the previous year.

In his statement, Eric Trump said the Trump Organization agreed to not actively solicit foreign government business for the hotel when his father took office, and its success has been all the more remarkable given that voluntary restraint.

But Kathleen Clark, a government ethics expert and Trump critic, said the idea that the hotel has made sacrifices to avoid conflicts is “nonsense” and the Trump Organization may be selling now because it fears the profits will fall if the president is not re-elected.

“There is no reason to think that Republican Party operatives or a trade association that wants to curry favor with the next president will choose this hotel,” said Clark, a law professor at Washington University in St. Louis. “It will just be another fancy hotel.”

Other government watchdogs saw danger with the sale itself: Will the buyer pay more than the hotel is worth in attempt to get in good with the administration? And what if the buyer is from overseas?

“If the Trump Organization puts out a ‘For Sale’ sign on the Trump International Hotel and seeks and takes bids, it will create massive conflicts of interests with the deep-pocketed individuals, foreign governments, investment funds or corporations that could afford to make such a purchase,” said Robert Weissman, president of Public Citizen, a liberal-leaning consumer advocacy group.

The possible sale comes at a fraught time for the Trump real estate empire.

Several residential buildings and hotels paying to brand themselves with the Trump name have removed it because of his politics. And the president earlier this month pulled plans to hold a Group of Seven summit at his Doral resort near Miami amid criticism it would be a brazen violation of the emoluments clause. Trump later lashed out about the reversal, saying, “You people with this phony emoluments clause.”

After winning a contract from the federal government to lease the 121-year-old, Romanesque Revival-style post office in 2013, Trump spent $200 million renovating it into a hotel.

The Wall Street Journal reported that the Trump Organization is hoping to get more than $500 million in the sale. But Sean Hennessey, CEO of consultancy Lodging Advisors, said that while he has no idea what the sale could actually bring in, it is rare to get more than $1 million for each guest room, which would translate into $263 million.

Any sale would have to be approved by the agency overseeing the lease, the General Services Administration, as well as a lawyer hired by the Trump Organization to vet such deals for conflicts of interest.

In his statement, Eric Trump addressed concerns about conflicts of interest by noting the company cuts a check to the U.S. Treasury each year for what it calculates as “profit” from foreign government business at its hotels and other properties. That amounted to $191,538 last year, up from $151,470 the previous year.