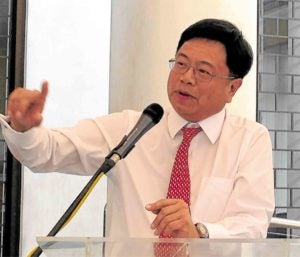 Ayala-led Bank of the Philippine Islands (BPI) has raised P3 billion from long-term negotiable certificates of time deposit (LTNCDs) offering as it prepares its war chest with funds that can be used to jack up lending amid further reduction in banks’ reserve requirement ratio (RRR).

On the sidelines of the opening of BPI’s biggest branch in Makati City on Thursday night, president and chief executive Cezar Consing told reporters that the new round of 100-basis point RRR cut by December, as announced by the Bangko Sentral ng Pilipinas (BSP), would benefit all banks “because there would be an opportunity to make more money available for lending.”

“We are now closer to aligning our reserve ratios with the other countries in the region. I think it also reflects the governor’s confidence in the strength of the financial system,” Consing added, referring to BSP Governor Benjamin Diokno.

Despite the series of RRR reduction, Consing noted that the ratio remained higher than the levels in other countries in the region. “But I think his (Diokno’s) plan is to gradually bring it down.”

In a statement on Friday, BPI said the LTNCDs with a tenor of 5.5 years were priced at 4 percent a year payable quarterly when publicly offered from Oct. 4 to 18.

These LTNCDs had been listed and currently tradable on bond platform Philippine Dealing and Exchange Corp.

“This capital raise will help finance the growth of a loan book that, with every passing quarter, becomes a bit more green, a bit more sustainable,” Consing said in the statement.