Hummus where the heart is 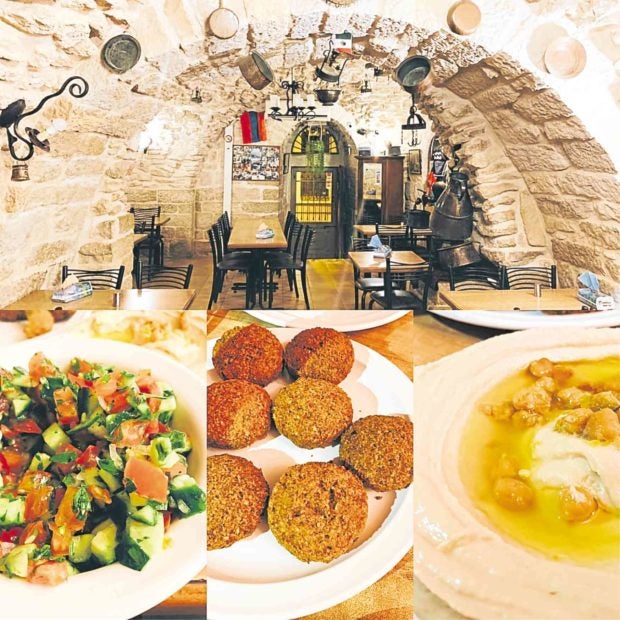 Afteem: One of the best hummus and falafel in Bethlehem -margaux salcedo

The Holy Land is probably on the bucket list of most Filipinos as our Catholic faith is the largest in Asia. It was definitely my mother’s dream—and so my sister and I had the privilege of joining her on her pilgrimage.

Whether as a clueless tourist, a historian or a hardcore religious person, the joy of visiting the Holy Land is immeasurable.

One of the few challenges, however, is—how not to get tired of eating hummus every day.

So instead of whining about having this gerber-like dip for every meal, we went on a quest to find really good hummus at least at the major sites we visited.

Bethlehem: Afteem Manger Square, Bethlehem. In Bethlehem, we found it at Afteem. A pilgrim’s schedule being packed, we did not really have time to explore too much. Thankfully, a golden voice told us where to find the best falafel in Bethlehem, which also served excellent hummus.

The restaurant’s name is Afteem, just off Manger Square, the plaza right in front of the Church of the Nativity.

As you approach the restaurant, there is a first falafel kiosk on the row of falafel stores that will beckon you to come in. But that is not Afteem, which is the second store.

At first glance, it looks like a kiosk just selling falafel to-go. But do go inside because it is a homey restaurant filled with character.

Aside from serving food, the owners are happy to put their heritage on the menu and explain that theirs is a “a story that began in 1948 and is a living example of a strong nation that doesn’t surrender despite all difficult circumstances of life … the story of refugees within their own country … the story of Afteem Restaurant, that though it has become a part of Bethlehem heritage, it still holds the name of Jaffa and it will do it forever.”

The restaurant was founded by Mr. Saliba Salameh. Afteem is the eldest of his five sons.

Salameh began the restaurant simply with the objective of serving popular food such as falafel and hummus. He and his family, especially his sons, succeeded in not only serving such food but making it the best in the area.

There is something not just about the hummus in Afteem but also about their Arabic salad. Compared with the hummus and Arabic salad that we tried in Jerusalem, Nazareth and Jordan, this was way better.

The texture of the hummus was thicker without being heavier. It had a richer flavor, which we believe was due to the olive oil they used.

Their Arabic salad, comprised simply of cucumber, cherry tomatoes, a lot of parsley, onions and mint was not only refreshing but energizing. The falafel, of course, was excellent; it was not too dry nor tasteless.

The best way to enjoy is to open up a warm piece of pita bread, slather it with hummus inside, add the Arabic salad, and then add the falafel as if it was your burger meat. You will remember this dish in its deliciousness for a very long time.

Jerusalem: Armenian Tavern 79 Armenian Patriarchate Road, Old City, Jerusalem. I’ll admit that the first reason why I agreed to eat at an Armenian restaurant in Jerusalem was because of Kim Kardashian. LOL. But I am happy that we gave in to our pop culture references because the Armenian Tavern in Jerusalem was better than the restaurants we tried in the Jewish Quarter or even in the Christian Quarter (it is obviously in the Armenian Quarter, which is between the Jewish and the Christian Quarters).

The restaurant looks like an antique house when you enter and they do sell some furniture, trinkets and art. The antiques give the place more character, and you may soon find yourself browsing around the space, wondering if this or that would fit in your luggage.

The menu is conveniently friendly to both locals and tourists. It had English translations.

Of course we had hummus, which was the best we tried in the few restaurants we sampled in Jerusalem and this was the best in the city. Their Armenian salad was also good.

Out of curiosity we also tried the bulghur, which is cracked wheat balls stuffed with ground beef, and the sinyeh, which is ground beef mixed in a rich, thick sesame sauce with potatoes, onions, sweet pepper and tehina (sesame butter). I was not converted to rave about these dishes, except for their hummus—it was really good!

Nazareth: Alreda Al Bishara, Nazareth (behind Church of the Annunciation). In Nazareth—actually in Bethlehem, Jerusalem and Nazareth—it is recommended that you stay at Casa Nova pilgrim house which is actually a hotel but run by the Franciscans.

Have all your meals in the hotel and look for Elias to give you a good glass of Arak. Don’t bother with the side restaurants that don’t serve quality food.

A hip restobar nearby is Alreda. They have a few fusion dishes like pizza with Middle Eastern ingredients although they also serve traditional Nazareth items like seasonal dishes made with bamya (okra) and akub (wild thistle) and fresh artichoke hearts with chopped beef, almonds and pine nuts.

The place is made extra special by the fact that it is a 200-year-old Ottoman-era mansion. Also, they love jazz.

If you do go to the Holy Land, make sure to focus on your faith and not your food. It is holy ground, after all.

After your trip, I assure you, you will go back to longganisa and rice because hummus will be coming out of your ears.

Read Next
DTI wants aircraft parts exempt from taxes
EDITORS' PICK
BREAKING: 3,226 latest COVID-19 cases bring PH’s total to 106,330
Smart 5G goes live
Water remains our saving grace right now
A gem of a residence in the new normal
Been there, done that but what’s the difference between MECQ and GCQ?
PNP: Checkpoints back in MECQ areas
MOST READ
MECQ guidelines in infographics
MECQ in NCR, other areas: Mass transportation suspended, quarantine pass required anew
Doctors group to Duterte: ‘There was never a call for a revolt’
Want higher pay? Join the police force, Duterte tells nurses
Don't miss out on the latest news and information.

Doctors group to Duterte: ‘There was never a call for a revolt’