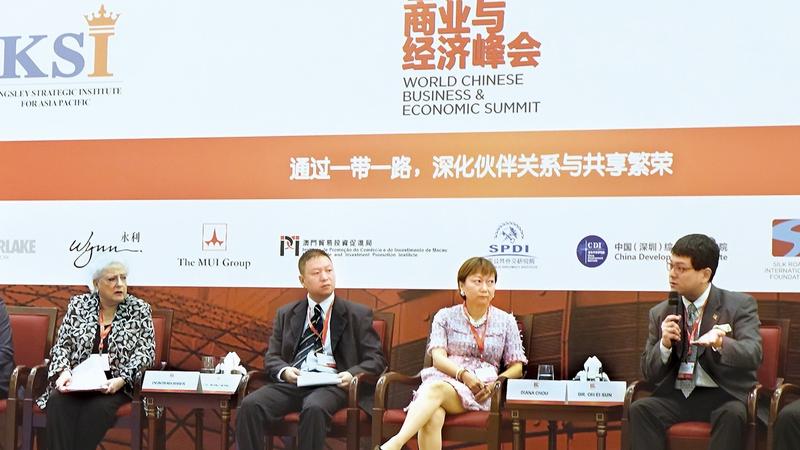 HONG KONG — The rise of the Bay Area to become a world-class city cluster means huge opportunities for Southeast Asian entrepreneurs for investment and collaboration, speakers told a Bay Area forum in Macau on Thursday.

“The development of the mega Guangdong-Hong Kong-Macau Greater Bay Area has taken off, and is pushing full steam ahead for the benefit of enterprises,” said Zhou Li, publisher and editor-in-chief of China Daily Asia Pacific, noting that Southeast Asian companies, in particular those with a vast pool of Chinese business links and information, will find the opportunities created by the Bay Area attractive and potentially rewarding.

Serving as an important support pillar for the Belt and Road Initiative, the Bay Area comprises nine Pearl River Delta cities in Guangdong province and the two special administrative regions of Hong Kong and Macau.

Deeper collaboration among Asian businesspeople and companies is especially important at this time when the region is still experiencing the turbulence brought by the ongoing trade tensions between China and the United States, Zhou said.

In welcoming remarks, Michael Yeoh, chairman of the WCBES organizing committee, said the world needs to emphasize partnership as it is important for peace and prosperity.

“The Belt and Road Initiative will be a powerful force for regional connectivity to enhance prosperity,” said Yeoh, who’s also the president of the Kingsley Strategic Institute for the Asia Pacific, a co-organizer of the summit.

Wilfred Wong Ying-wai, president and chief operating officer of Sands China – a subsidiary of global resort developer Las Vegas Sands – told the forum the Bay Area has its unique advantages. For example, Hong Kong is the world’s biggest offshore renminbi business center, Macao is one of the region’s biggest tourism destinations, and Shenzhen is recognized as the hub of high technology.

Southeast Asian companies, he said, will find southern China suitable for investment and partnership as both regions’ economies are dominated by small and medium sized-enterprises.

Wong, who also chairs the Hong Kong-based Pacific Basin Economic Council, said challenges, though, are the coexistence of multiple currencies, tax systems and administrations, and governments, at both the central and local levels, need to facilitate the free flow of talent, goods and transport in the region.

Maria Helena de Senna Fernandes, director of the Macao Government Tourism Office, said Macao is already working with neighboring cities like Zhuhai to enhance Macao’s position as a world center for tourism and leisure – one of four roles it was given in the outline development plan for the Bay Area unveiled in February.

She sees this as more than just developing the tourism sector itself. “Tourism will help our people live a better life in the city,” she said, adding that 40 million tourists are expected to visit Macau this year. “I hope there’ll be more integration and communication in the region.”

Diana Chou, chairman of L’Voyage – a private jet charter consultancy – noted the sizeable cluster of international and domestic airports in the Bay Area, but she believes there’s still room for strengthening its aviation connectivity by further developing general aviation, like helicopters and other future modes of transport.

“Since 2016, the growth has been phenomenal and the government has poured billions of dollars into the industry,” she said. While Guangzhou now has 33 heliports and helipads, about 10 percent of the country’s total, “this is not enough to spearhead the economic growth in the region that we need”, she said.

Oh Ei Sun, senior fellow of the Singapore Institute of International Affairs, said it’s important for the Bay Area to build collaboration with other city clusters around the world, including those in Southeast Asia, to develop entrepreneurship.

Besides the transport connectivity that countries are working to improve, Oh said equal importance should be given to a virtual bridge of technology that connects the Bay Area and the rest of Asia to encourage innovation.

“Shenzhen will play a leading role in building the whole (Bay Area) into an international center for scientific research and tech innovation,” said Wang Wanli, executive director of the Hong Kong, Macao and Regional Development Research Department at the China Development Institute in Shenzhen.

For example, a total of 18,081 applications under the patent cooperation treaty of the World Intellectual Property Organization had been filed in Shenzhen, accounting for more than 30 percent of the total applications in China, according to a white paper released by Shenzhen in April.

Simon Lee, managing director of STM Development – a property development and real-estate advisory firm based in Australia – said Australian companies can help add value to the Bay Area’s development in areas like education, healthcare, as well as cultural and lifestyle services.

Impressed by how convenient it is to travel on the Hong Kong-Zhuhai-Macau Bridge – the world’s longest sea-crossing bridge – he said construction of the Bay Area is not purely about building an infrastructure portfolio. It also presents many indirect opportunities.

The roundtable session is part of the two-day WCBES being held in Macau. Under the theme “Enhancing Partnerships and Shared Prosperity Through the BRI”, the summit provides a platform for government, business, think tanks and scholars to discuss the importance of business as a driver of sustainable economic growth and people-to-people exchange. China Daily is the media partner of the summit.

It was previously known as the World Chinese Economic Forum, which had been held in Chongqing, Hong Kong, London, and Kuala Lumpur and Malacca in Malaysia.