BANGKOK – Asian shares were mixed Thursday after officials signaled work remains to be done on an agreement for a truce in the tariff war between the U.S. and China. 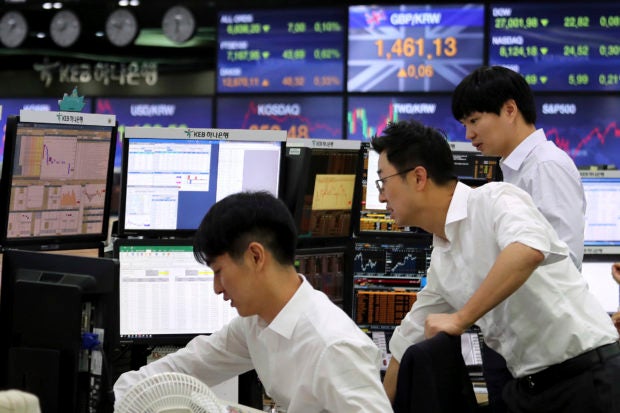 Currency traders watch monitors at the foreign exchange dealing room of the KEB Hana Bank headquarters in Seoul, South Korea, Thursday, Oct. 17, 2019. Asian shares were mixed Thursday after officials signaled work remains to be done on an agreement for a truce in the tariff war between the U.S. and China. (AP Photo/Ahn Young-joon)

Hong Kong led regional gains after its chief executive, Carrie Lam, announced help for the property sector. The semi-autonomous city’s economy has been languishing amid months of increasingly violent political protests that are in part fueled by the sky-high cost of housing.

Shares fell in Taiwan and Singapore but logged gains in Jakarta and Bangkok.

The benchmark S&P 500 index remains 1.2% below its all-time high set in July.

The modest losses came as investors weighed mixed data on the economy and the latest batch of corporate earnings reports.

A move on Tuesday by the House of Representatives to show support for the pro-democracy protests in Hong Kong appeared to dim some investor optimism about the prospects for progress in the latest trade talks between the U.S. and China.

On Friday, the U.S. agreed to suspend a planned hike in tariffs on $250 billion of Chinese goods that had been set to kick in Tuesday. Beijing, meanwhile, agreed to buy $40 billion to $50 billion in U.S. farm products.

But in a White House news conference on Wednesday, U.S. Treasury Secretary Steven Mnuchin told reporters that officials were still ironing out details of their preliminary agreement.

President Donald Trump has said he does not expect to sign an agreement until next month, when he is due to meet with Chinese President Xi Jinping at the regional Asian Economic Cooperation, or APEC, forum in Chile.

The conciliatory steps announced on Friday suggested the trade talks were making some progress, but the three resolutions passed in the House on Tuesday in support of pro-democracy protesters in Hong Kong gave investors a new reason to be less optimistic.

In other trading, benchmark crude oil lost 48 cents to $52.88 per barrel in electronic trading on the New York Mercantile Exchange. It rose 55 cents to settle at $53.36 a barrel on Wednesday. Brent crude oil, the international standard, lost 45 cents to $58.97 a barrel.