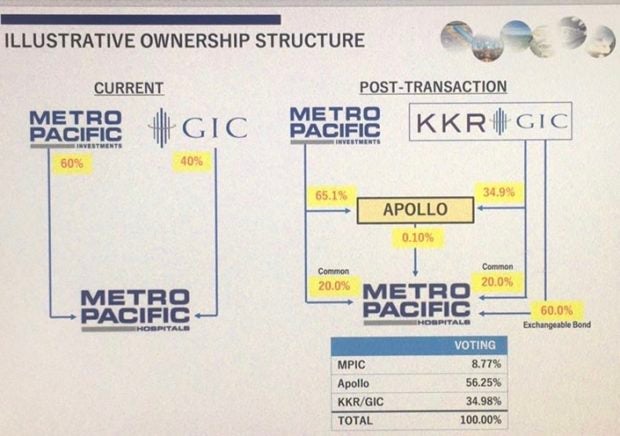 After selling a 42-percent stake in the hospital business to the KKR-led consortium for P35.3 billion, MPIC’s economic interest in MPHHI will go down to 20 percent from 60 percent.

The consortium includes MPHHI’s existing investor GIC, the sovereign wealth fund of Singapore, which will invest more in the business while restructuring its existing interest, currently at 40 percent.

According to a presentation to analysts, part of KKR-GIC’s investment will be in a local holding firm called Apollo, which will be 65.1-percent owned by MPIC and 34.9-percent by the foreign consortium.

Outside of Apollo, however, Metro Pacific will have 8.77-percent additional voting rights from its remaining direct equity while KKR-GIC will have 34.98 percent also through direct equity.

In terms of total economic interest, however, the deal will give KKR-GIC control of 80 percent of MPHHI, combined with the existing shares already held by GIC.

The deal with KKR was supposed to have been structured this way—part of the shares infused to a local joint venture firm that was majority owned by MPIC—to address the foreign ownership limit on land as many of the hospitals under the group owned the site where they operated in.

This transaction valued lock, stock and barrel of MPHHI at around P83 billion ($1.6 billion).  Based on management estimates, this would be equivalent to 22 times MPHHI’s prospective cashflow and 58 times the likely earnings this 2019.

“These are extremely good numbers and investors should be happy.  Again, however, the market had been conditioned to expect nothing less than $2 billion and potentially even greater than the $3 billion from a prospective IPO which has now been shelved for at least a few years,” Abacus Securities head of research Nicky Franco said in a research note on Wednesday.