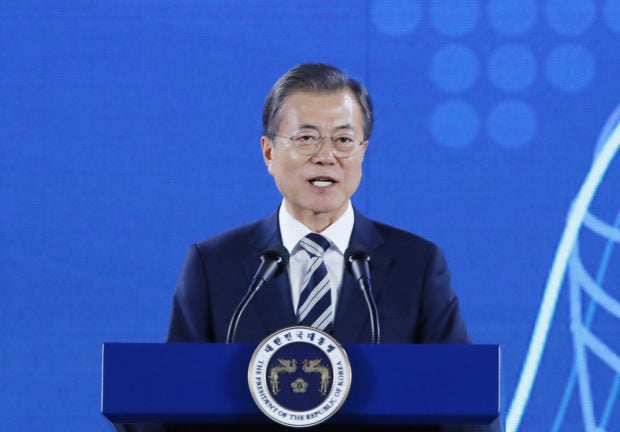 SEOUL — South Korea aims to become the world’s No. 1 green car provider and the first country to start commercial operations of autonomous driving in the next 10 years, the government said Tuesday.

It will achieve the goal by promoting the convergence of industries, implementing policy support and injecting a combined 60 trillion won ($50 billion) from the private and public sectors.

Highlighting the nation’s leadership in the areas of batteries, hydrogen, semiconductors and IT technology, President Moon Jae-in said Korea has a viable opportunity to become a leader of future mobility and the nation is in “the right time” to ditch its fast-follower strategy and pursue economic growth by leading advanced technologies in the future.

The government views that the future mobility market in 2030 will be led by green autonomous cars and other innovative types of transportation such as flying cars.

“Korea will raise the portion of new electric and hydrogen cars in new vehicle sales to 33 percent and secure 10 percent market share (of the global green car market) by 2030,” said President Moon during a proclamation ceremony for the national vision of the future car industry, at Hyundai Kia Motors Namyang Technological Research Center in Hwaseong, Gyeonggi Province, on Tuesday afternoon.

He went on to say that Korean companies will invest 60 trillion won over the next decade to secure future car technologies. Among them, Hyundai Motor will invest 41 trillion won, including in the area of urban air mobility such as flying cars, last-mile mobility and robots. The government will also set aside 2.2 trillion won to support the private sector.

As for autonomous vehicles, they will be developed on the basis of hydrogen cars and electric cars. By 2024, the ministry plans to establish major infrastructure, including telecommunications, precision maps, traffic control and roads, essential for fully autonomous driving on major roads. It will also create the institutional basis for autonomous driving, such as standards for production and operations, a performance verification system and insurance.

The nation also plans to commercialize flying cars by 2025 through technology development and legal system maintenance. By adopting flying cars, travel time in the metropolitan areas will be reduced by 40 percent, the ministry said.

Lee Rang, the Transport Ministry’s director of the drone transport division, said, “In order to commercialize the cars, we need to deal with multiple issues, such as testing whether the cars are safe, setting up related institutions and infrastructure and social acceptability such as noise issues.”

By 2025, the Transport Ministry plans to secure key technologies such as high-power motors, develop infrastructure such as a highway exclusively for flying cars, revise related laws and complete pilot services.

Alongside the government’s announcement, Hyundai Motor suggested creating a collaborative industry environment for future mobility, urging other companies to join hands for the development of advanced technologies.

The carmaker will share a format for app development for mobility services, so that individual developers can come up with fresh ideas such as an online app that provides maintenance records. Hyundai also plans to supply a core system for hydrogen car operation — such as fuel-cell stacks, gas tanks and other mechanical programs that make the system work — to small and medium-sized auto manufacturers, so that they can also assemble commercial vehicles powered by hydrogen.

“We will transform from a mere car manufacturer into a service-oriented company that provides new experience to customers, and we would call it a smart mobility solution provider,” said Hyundai Motor Executive Vice Chairman Chung Eui-sun at the ceremony.

Robredo calls on Filipinos: Mark those who shut down ABS-CBN