US suspends plans to hike tariffs Tuesday on Chinese imports 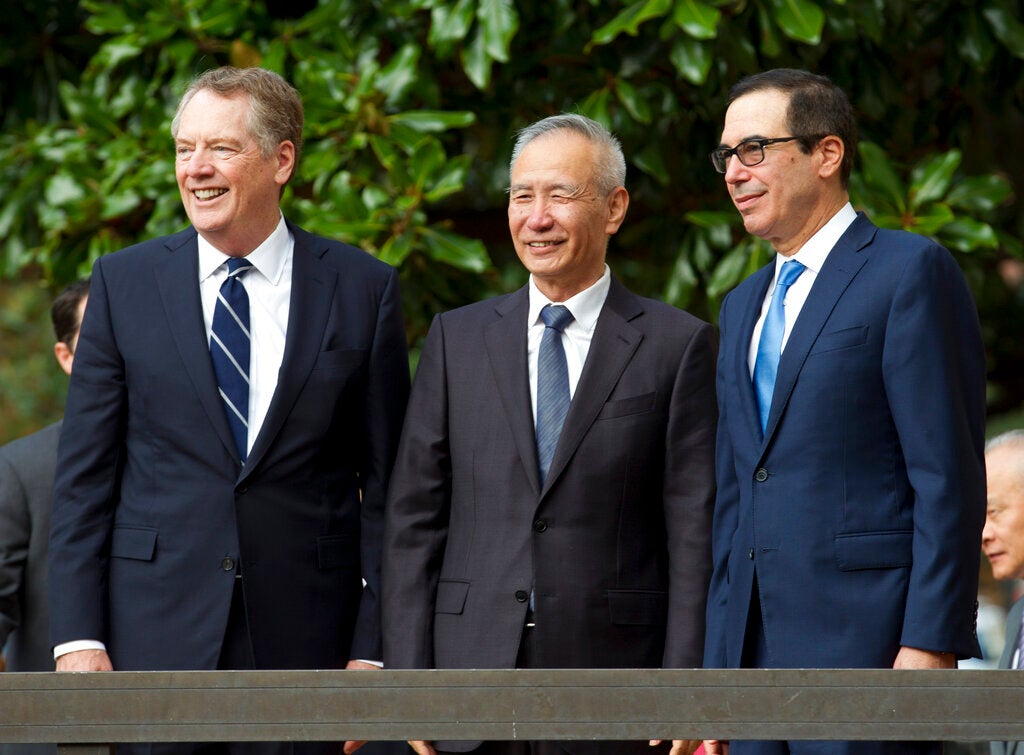 Chinese Vice Premier Liu He accompanied by U.S. Trade Representative Robert Lighthizer, left, and Treasury Secretary Steven Mnuchin, greets the media before a minister-level trade meetings at the Office of the United States Trade Representative in Washington on Thursday. (AP)

WASHINGTON — The Trump administration is suspending a tariff hike on $250 billion in Chinese imports that was set to take effect Tuesday, and China agreed to buy $40 billion to $50 billion in U.S. farm products as the world’s two biggest economies reached a cease-fire in their 15-month trade war.

The White House said the two sides made some progress on the thornier issues, including China’s lax protection of foreign intellectual property. But more work remains to be done on key differences in later negotiations, including U.S. allegations that China forces foreign countries to hand over trade secrets in return for access to the Chinese market.

The U.S. and Chinese negotiators have so far reached their tentative agreement only in principle. No documents have been signed.

President Donald Trump announced the trade truce in a White House meeting with the top Chinese negotiator, Vice Premier Liu He. The news followed two days of talks in Washington, the 13th round of negotiations.

“It took us a long time to get here, but it’s something that’s going to be great for China and great for the USA,” Trump said.

Trump has yet to drop plans to impose tariffs that are set to take effect Dec. 15 on an additional $160 billion in Chinese products — a move that would extend the sanctions to just about everything China ships to the United States. The December tariffs would cover a wide range of consumer goods, including clothes, toys and smartphones and would likely be felt by many American shoppers.

While providing scant details of just what was agreed to Friday, the White House said Beijing has pledged to be more transparent about how it sets the value of its currency, the yuan. The administration has accused China of manipulating the yuan lower to give its exporters a competitive advantage in foreign markets.

Earlier Friday, China announced a timetable for carrying out a promise to allow full foreign ownership of some finance businesses, starting with futures traders on Jan. 1. Ownership limits will be ended for mutual fund companies on April 1 and for securities firm on Dec. 1. Until now, foreign investors have been limited to owning 51% of such businesses.

For now, the two sides have come to “almost a complete agreement” on both financial services and currency issues, Mnuchin said.

The trade war has inflicted an economic toll on both countries. U.S. manufacturers have been hurt by rising costs from the tariffs and by uncertainty over when and how the trade hostilities may end.

“They’re trying to de-escalate,” said Timothy Keeler, a former chief of staff at the Office of the U.S. Trade Representatives. “I think it serves both sides’ interests because both sides were feeling pain.”

Stock prices had been up substantially all day, mainly in anticipation of a significant trade agreement. But once the White House announced the contours of the tentative accord, the market shed some of its gains. The Dow Jones industrial average, which had risen more than 500 points at its high, closed up 319.

The U.S. and Chinese negotiators did not deal this week with a major dispute over the Chinese telecommunications giant Huawei. The U.S. has imposed sanctions on Huawei, saying it poses a threat to national security because its equipment can be used for espionage. Trump has said he was willing to use Huawei as a bargaining chip in the trade talks.

The United States still has in place tariffs on more than $360 billion worth of Chinese imports. What changed Friday was that Trump suspended plans to raise existing tariffs on $250 billion in Chinese products from 25% to 30% next week.

Beijing has lashed back by taxing about $120 billion in U.S. goods, focusing on soybeans and other agricultural products in a shot at Trump supporters in rural America.

Last year, U.S. farm exports to China plummeted 53% to less than $9.2 billion. The additional Chinese purchases promised Friday — up to $50 billion over two years — would amount to a substantial boost to U.S. farmers.

But the toughest issues remain unresolved. And so do the details of what has apparently been agreed to in principle.

“This is an encouraging first phase,” said Craig Allen, president of the U.S.-China Business Council. “We await word on how implementation will be measured and in what timeframe, as well as details on scheduling subsequent phases”

Among the skeptics of Friday’s agreement is Derek Scissors, a China expert at the American Enterprise Institute, who suggested that the deal amounted to merely a temporary pause in the conflict.

“The president is acting as if a lot of Chinese concessions have been nailed down, and they just haven’t,” Scissors said.

The two countries were close to a more comprehensive deal in early May. But talks stalled after the U.S. accused China of reneging on earlier commitments. Trump acknowledged that Friday’s deal has yet to be put down on paper but said that wouldn’t be a problem.

“China wants it badly, and we want it also,” Trump said. “We should be able to get that done over the next four weeks.”

“Finally, a ray of hope for the U.S.-China trade relationship,” he said. “While there remains significant work ahead to address many of the most important U.S. trade and investment priorities, we will continue to lend our full support.”

Still, Gregory Daco, an economist at Oxford Economics, suggested that the partial nature of the deal won’t relieve much of the uncertainty surrounding trade policy that has discouraged many American companies from investing in new equipment and expanding.

“For businesses this will mean less damage, not greater certainty,” Daco said in a research note.

Daco has estimated that the trade fight will cut U.S. growth by about 0.6 percentage point in 2020. Friday’s pact might reduce that slightly to 0.5 percentage point, he said.

The two countries are deadlocked primarily over the Trump administration’s assertions that China deploys predatory tactics — including outright theft — in a sharp-elbowed drive to become the global leader in robotics, self-driving cars and other advanced technology.

Beijing has been reluctant to make the kind of substantive policy reforms that would satisfy the administration. Doing so would likely require scaling back China’s aspirations for technological supremacy, which it sees as crucial to its prosperity.