Tokyo and Hong Kong declined while Sydney gained and Seoul was unchanged. 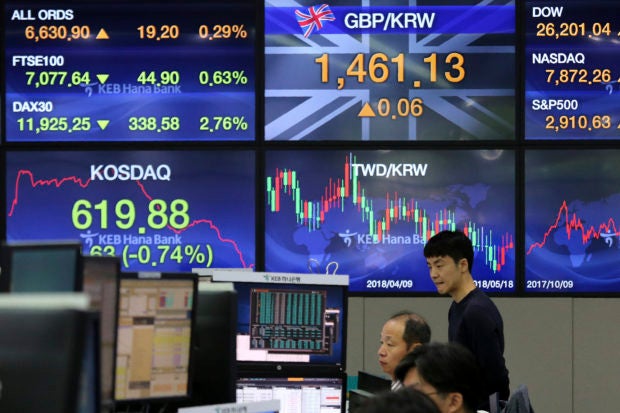 U.S. stocks pulled out of a two-day skid sparked by unexpectedly weak manufacturing and hiring data. Markets were hit again Thursday by a survey showing weaker-than-forecast growth in U.S. service industries, but investor hopes were buoyed by growing expectations the U.S. Federal Reserve will cut rates again to shore up economic activity.

“Increased hopes for further interest rate cuts by the Fed look to help stabilize markets into the end of the week,” Jingyi Pan of IG said in a report.

On Wall Street, shares were boosted Thursday by strength in technology industries.

Investors are wrestling with uncertainty about the economy and the impact of a U.S.-Chinese tariff war.

Adding to their unease, the Institute for Supply Management, an association of purchasing managers, said its non-manufacturing index sank to 52.6 from 56.4 in August. Readings above 50 signal growth, but September’s figures are the lowest since August 2016.

Services account for more than two-thirds of the U.S. economy and have been resilient in the face of the tariff war that is squeezing manufacturers.

The Fed has lowered rates by a quarter-percentage point twice this year in a bid to shield the economy from slowing growth abroad and the effects of the trade war. Investors put the odds the Fed will cut rates again at the end of this month at above 88%, according to the CME Group.

The federal government is due to release its own snapshot of the job market on Friday. The Labor Department is expected to report employers added 145,000 jobs last month, up from 130,00 in August, according to analysts polled by FactSet.

ENERGY: Benchmark U.S. crude gained 21 cents to $52.66 per barrel in electronic trading on the New York Mercantile Exchange. The contract lost 19 cents on Thursday to close at $52.45. Brent crude, used to price international oils, advanced 22 cents to $57.93 per barrel in London. It gained 2 cents the previous session to $57.71.