UPS gets government approval to become a drone airline

DALLAS – UPS has won government approval to operate a nationwide fleet of drones, which will let the company expand deliveries on hospital campuses and move it one step closer to making deliveries to consumers. 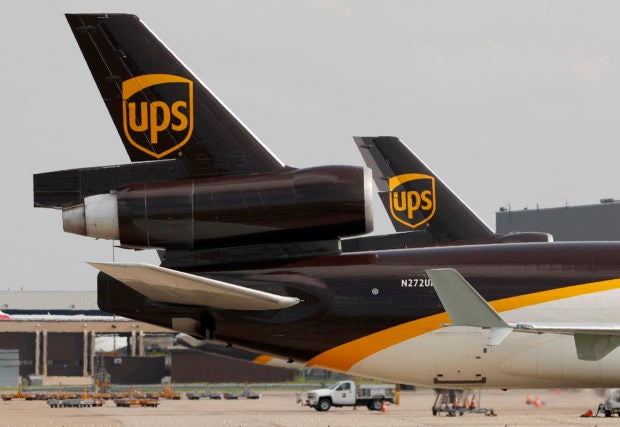 FILE – In this June 24, 2019, photo a UPS aircraft taxis to its hangar area after it arrived at Dallas-Fort Worth International Airport in Grapevine, Texas. UPS says it won government approval to run a drone airline, and it plans to expand deliveries on hospital campuses and eventually other industries. United Parcel Service Inc. said Tuesday, Oct. 1, that its drone subsidiary was awarded an airline certificate last week by the Federal Aviation Administration. (AP Photo/Tony Gutierrez, File)

Many regulatory obstacles remain, however, before UPS — or other operators who are testing drones — can fill the sky over cities and suburbs with drones carrying goods to people’s doorsteps.

United Parcel Service Inc. said Tuesday that its drone subsidiary was awarded an airline certificate last week by the Federal Aviation Administration, the first U.S. company to get such a broad approval.

Even before getting that designation, UPS Flight Forward, as the subsidiary is called, has operated more than 1,000 flights at WakeMed’s hospital campus in Raleigh, North Carolina.

The designation removes limits on the size of the company’s potential drone operation. Flight Forward can fly an unlimited number of drones, a key step toward expanding the operation. It can also fly drones at night — the company plans to do that after installing the necessary colored warning lights on each machine.

However, UPS still faces severe restrictions before it can run a large commercial operation with drones.

For example, drones won’t be allowed to fly beyond the sight of the operator without an FAA exemption for each route. Also, each flight will need a separate operator. Scott Price, the company’s chief strategy officer, said UPS will eventually apply for FAA permission to have a single operator fly multiple drones at the same time.

The airline certificate lets UPS fly drones carrying more than 55 pounds, “but we’re not comfortable we have the hardware for that yet,” Price said in an interview.

Operations will be limited to campus-like settings because FAA has not yet written regulations to allow commercial drone flights over populated areas. Price said UPS is eyeing “hundreds” of campuses in the U.S., including hospitals, colleges and office complexes.

Price said the Wake Forest experiment has been successful, with only “a few” drone flights canceled for mechanical problems or because of bad weather. He said none have crashed. With a special FAA exemption, the company operated a drone flight there on Friday beyond the sight of the operator, which Price said was a first for a revenue-generating delivery.

UPS believes the earliest commercially viable uses of drones will be for same-day deliveries, for augmenting truck-borne deliveries in rural areas, and for larger drones that could carry cargo of up to a ton from one rural area to another. Price said the latter idea is still years away.

UPS is racing against technology companies and startups to develop commercial-scale deliveries by drone to consumers.

Amazon.com CEO Jeff Bezos promised in 2014 that drones would be making deliveries to people’s homes by 2019, but regulatory and technological hurdles proved too much for that prediction. Earlier this year, the FAA gave permission for a unit of Google parent Alphabet Inc. to make drone deliveries, but only in a tiny piece of southwestern Virginia.

Ryan Citron, a transportation analyst at Navigant, said UPS was not the best-known player in drones — “Bezos gets more headlines,” he noted — but the company went about launching its subsidiary and seeking FAA approval. UPS has leapfrogged those rivals, at least for now, by being able to offer services in hundreds of campus settings.

Citron said that UPS’ performance on hospital and college grounds will help determine how quickly regulators will approve consumer deliveries.

“If everything works well, it gives them legitimacy to move into the residential space more quickly,” he said, “but if there are some major crashes or incidents it could slow down the approval process. It’s going to be an important test bed.”

In the U.S., drone operators have been frustrated by the lack of FAA regulations to allow drones to fly over urban and suburban areas, and to set rules for remote identification of drones. The latter rule would help law enforcement agencies, which were given authority under a law passed last year to track, intercept and destroy drones that they deem a security threat. /gsg

Read Next
Revival of Manila tram system eyed
EDITORS' PICK
Is it safe to talk politics again at family gatherings? ‘The Reconciliation Dinner’ shows us what that’s like
The Best Tech Gifts For The 2022 Holidays
House energy committee chair Arroyo bats for cheap electricity
EDITORIAL: To a bike-friendly future
Pagasa: Warm, sunny Sunday in most parts of PH
vivo’s coming to town to grant wishes with more holiday promos
MOST READ
LOOK: Vhong Navarro transferred to BJMP detention facility in Taguig
The Elephant Man in the Senate
Posh village as ‘shabu’ haven
LOOK: Zanjoe Marudo bonds with Ria Atayde, her family
Don't miss out on the latest news and information.