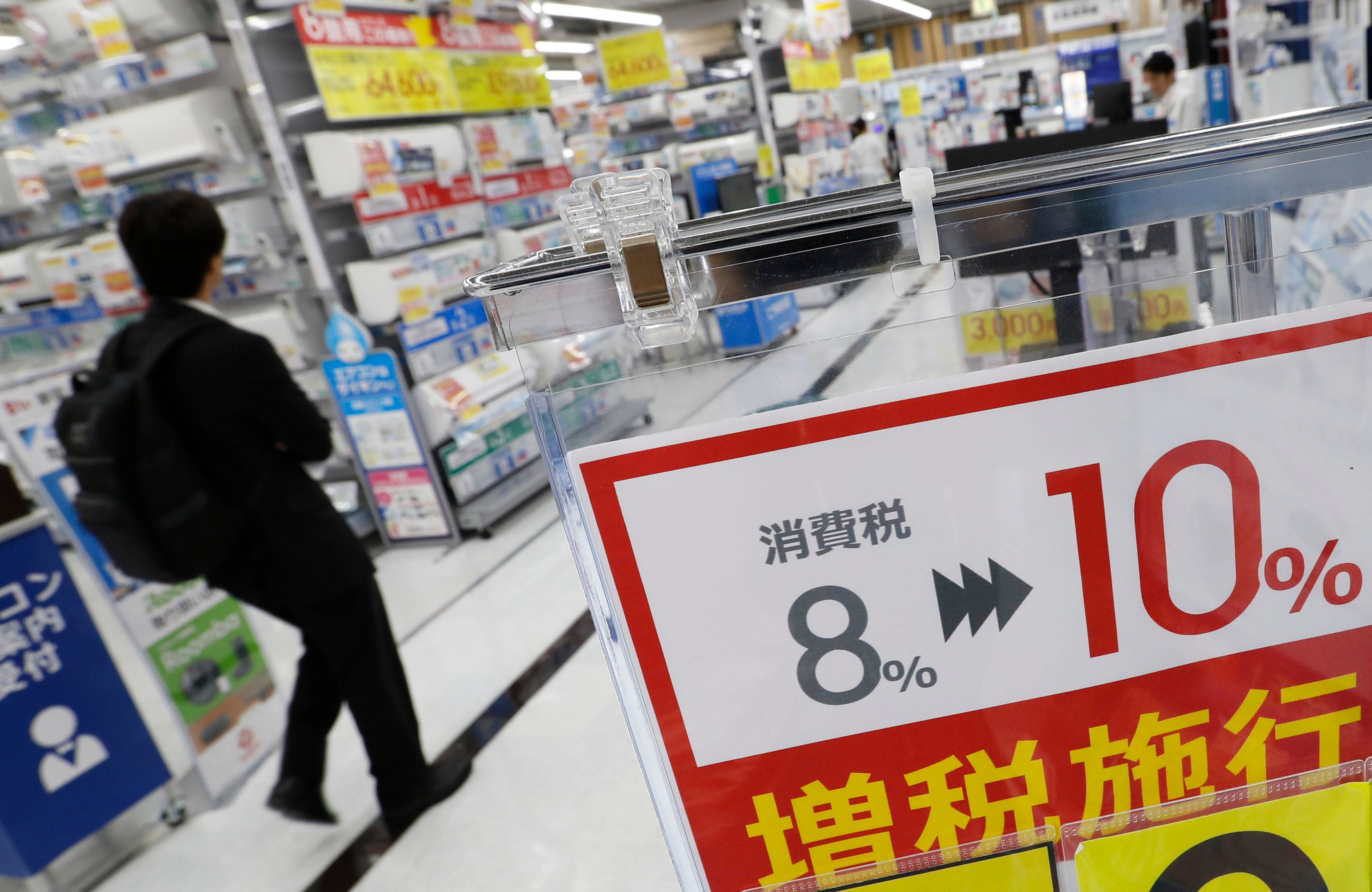 In this Sept. 30, 2019, photo, a signboard reads “Consumption tax hike, 8 percent to 10 percent”, at a mass home electronics retailer in Tokyo. Japan has raised the consumption tax to 10 percent from 8 percent, amid concerns that it could sink the Japanese economy though government officials say ample measures are taken to minimize the impact. (Shinji Kita/Kyodo News via AP)

TOKYO — Japan’s national sales tax was raised to 10% from 8% on Tuesday, amid concerns that the long-delayed move could derail the fragile growth path of the world’s third-largest economy.

Officials said ample measures were taken to cushion the impact of the hike after previous tax increases – a 2-point increase to 5% in 1997 and another to 8% in 2014 – brought on recessions.

Prime Minister Shinzo Abe postponed this hike twice but said it was unavoidable given rising costs for elder care and a growing national debt as the population ages and shrinks. After decades of fiscal deficits that have taken the debt to more than twice the size of the economy, Abe has promised a return to balance by 2025, but that will require growth to be sustained at a healthy pace.

The sales tax hike coincided with the release of data showing business sentiment among large manufacturers worsening in September to its worst level since 2013.

The result was better than expected, but the outlook is forecast to deteriorate further by December’s quarterly report of the Bank of Japan’s survey, called the “tankan.”

“Particularly affected are producers of basic materials, reflecting recent commodity market movements, as well as producers of general-purpose and production machinery, who are exposed to risks posed by recent re-escalation of US-China trade frictions,” Oxford Economics said in a commentary.

Other data released this week have shown industrial output decreasing in August, while unemployment remained at a 26-year low of 2.2%.

The economy expanded at an annual pace of 1.8 percent in April-June, faster than anticipated. But slowing exports and rising prices for oil are expected to drag growth lower in the coming months.

The sales tax increase covers most goods and services from clothes, electronics to transportation and medical fees, but the government has sought to soften its impact with tax breaks for home and car purchases. It also kept the tax for groceries unchanged for low-income households and is providing free pre-school education to families.

“We’ll take expeditious and utmost efforts to ward off any risk of a downward swing in the economy,” Chief Cabinet Secretary Yoshihide Suga said on the eve of the tax hike.

Analysts say the tax hike poses a deflationary risk at a time of growing uncertainty over trade tensions between the U.S. and China.

That’s after years of ultra-loose monetary policy aimed at trying to convince businesses and consumers to spend more money. More than six years after Bank of Japan Gov. Haruhiko Kuroda launched his “big bazooka” injections of billions of dollars of cash into the economy, aimed at prying the country out of its deflationary doldrums.

He noted that the economy has slowed since late last year and that demand generated by the construction boom for the Tokyo 2020 Olympics is fading. The fear is that might undo years of effort to escape a deflationary rut where falling prices due to slack demand depress investment, a main driver of growth.

The tax hike will put an estimated additional burden on households of more than 2 trillion yen ($18 billion).

The exceptions and incentives built into the new sales tax regime are causing confusion. For instance, purchases “to go” at Starbucks Coffee outlets are still taxed at 8%, while customers choosing to dine in have to pay 10%.

Businesses are adapting with price cuts and rewards for cashless payments to attract customers. So economists said there was not a huge rush to beat the increase. That may mean the higher tax’s impact will be less severe than the blows of previous hikes.

“Stores seem to provide discounts, so I will go for those, plus, I don’t plan to buy luxurious goods with big price tags,” Junko Matsumoto, a homemaker in her 60s, said as she walked past a Tokyo train station. “I must admit the tax increase was unavoidable.”

“The government could have taken measures other than a tax increase, but it’s already done and there is not much I can do at this point,” he said. “I don’t think my shopping patterns would change very much, but I may not be able to go on trips as often as used to.” /kga

Read Next
PH firms flocked to cheap dollar loans in Q2 to fund growth
LATEST STORIES
DAY6 is for everybody
Mos Burger to open in Manila; teases with a pop-up
In ‘Jojo Rabbit,’ Comedy and Drama Collide
How to help the Taal evacuees
Margot Robbie talks about filming ‘Bombshell’s’ disturbing sexual harassment scene
MOST READ
OSG plea to revoke ABS-CBN franchise ‘a duplicitous move’ – Lacson
It’s too early to present Duterte’s ‘legacy’ – Lacson
Jake says relationship with Shaina ‘goes beyond physical attraction’
Redemption is sweet for Ginebra, Scottie Thompson
Don't miss out on the latest news and information.

Mayweather beats Pacquiao, Canelo for ‘Fighter of the Decade’